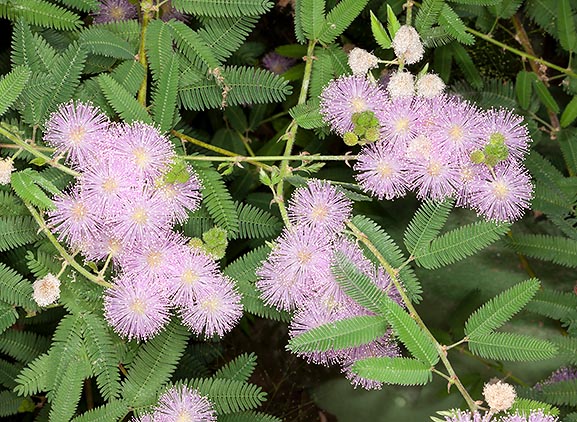 It is native to Argentina (Corrientes and Misiones), Bolivia, Brazil (Mato Grosso do Sul) and Paraguay, where it grows up to about 400 m of altitude at the borders of the forests.

The name of the genus comes from the Greek “mimos” = mimic, with reference to the movement of contraction of some species, if touched, which seems to imitate a reaction of fright.

The name of the species is the combination of the Greek words “polys” = much and “karpòs” = fruit; the variety is honoured to the Italo-Argentinian botanist Carlo Luigi Spegazzini (1858-1926).

The Mimosa polycarpa var. spegazzinii (Pirotta) Burkart (1948) is a perennial, woody, much ramified, up to 4 m tall shrub, with reddish stems covered by rigid bristles and pairs of curved and opposite thorns at the base of the leaves.

The leaves, on an about 2,5 cm long petiole are alternate, bipinnate, 5-7,5 cm long, with 25 to 35 oblong leaflets, obtuse or acuminate, about 9 mm long, with ciliate edges. The flower heads (inflorescences formed by a crowd of flowers with no stalk strictly in contact each other), solitary, in pair or in terminal, thorny, 15 cm long, racemes, are globular, with a diameter up to about 2,5 cm, with protruding stamina of a colour varying from the pink to the purple-pink.

The fruits are flat pods, slightly curved, with thorny-silky edges, of brown colour, up to about 2,5 cm long, united in clusters, containing, each one, 3-4 ovoid seeds of a pale brown colour. It reproduces in spring by seed, previously kept in water for 24-48 hours, just buried seed in a sandy soil kept humid at a temperature of 20-22 °C. It is a species cultivated more for the high “sensitivity” of the leaves, which render it a botanical curiosity, rather than for its flowers. 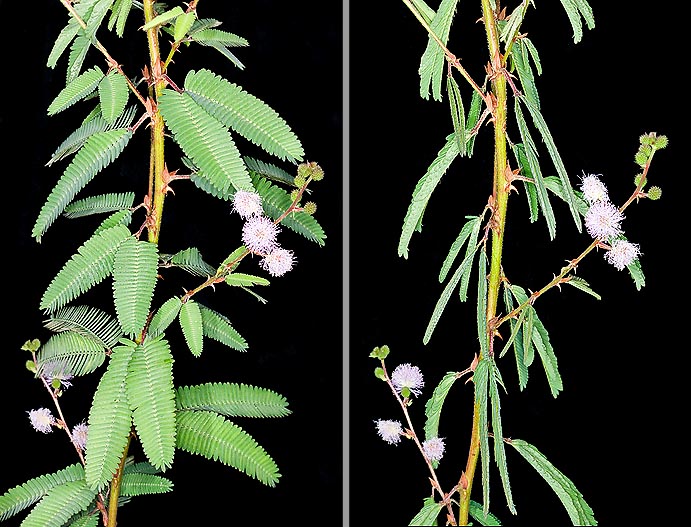 Less chilly than Mimosa pudica, like this one it folds at once the leaves if touched © Giuseppe Mazza

It is suitable for tropical, subtropical and warm temperate climates, as it can bear, for short time, temperatures of a few degrees under the 0 °C, even if it is wise, in the locations where such occurrences may take place, to keep it in a sheltered position.

It may grow up in full sun as well as slightly shaded and it is not particular for what the soil is concerned, provided the same is well drained.

Where the climate does not allow the permanent open air cultivation, it may be cultivated in pot, in a most possible luminous position, utilizing a very permeable soil, if necessary with the addition, by around the 30%, of sand or agri perlite; the watering must be regular in summer, but allowing the upper layer of soil to dry up before giving water again, reduced in winter.

The feature attracting the attention on this leguminous plant is called, in botanical term “seismonasty”, that is the movement of a plant as response to an outer stimulus, irrespective of the direction from which it comes; this characteristic, which represents a means of defence against phytophagous insects, is common to other species, such as the sensitive mimosa (Mimosa pudica).

In a much simple way, such movement is due to the presence at the base of each leaflet and of the entire leaf, of a turgidity, called pulvinus, formed by cells with thin walls whose turgor may rapidly vary after a stimulus, in particular that of a bump, on whatever part of the leaf; this originates an electrical impulse which is transmitted to the whole leaf and possibly to the rest of the plant, depending on the intensity of the stimulus. The impulse causes an alteration, particularly an increase, of the permeability of the cellular membranes which allows the passage by osmosis of the water from the lower half to the upper one of the pulvinus. As a consequence, the lower part loses its turgor whilst the same increases in the upper one, thus obliging the leaflets and the leaves to bend downwards; the transfer of the water is “guided” by the passage of the potassium ions through the cellular membranes. The contrary movement is slower, some minutes, and the water goes back from the upper half to the lower one rising leaf and leaflets which resume the normal position.