The triumph of the smallest. 5 to 23 cm high, can easily be kept on window sills. Several dwarf varieties in “zonal”, “ivy” and even “regal” groups. 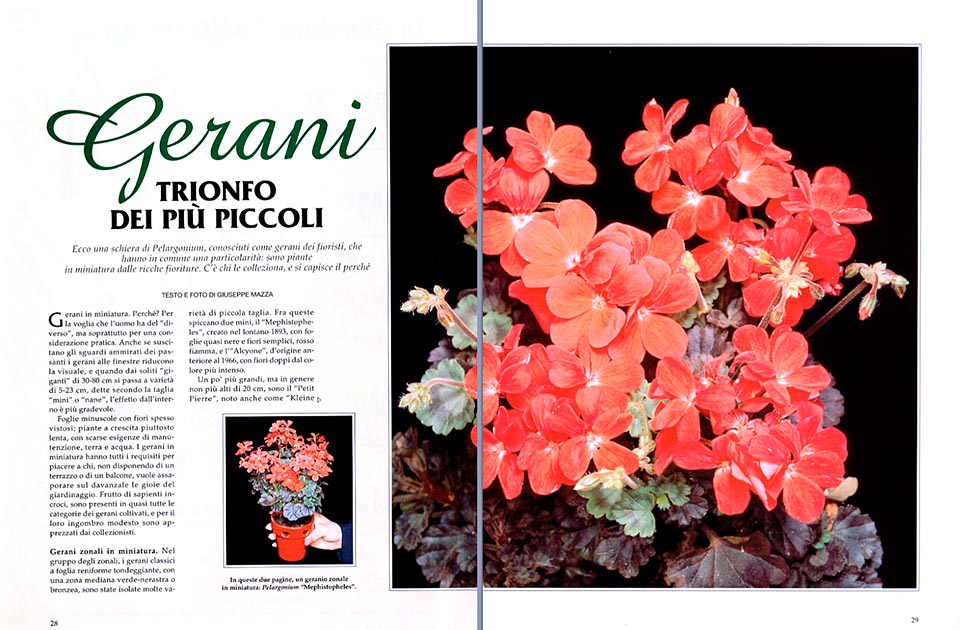 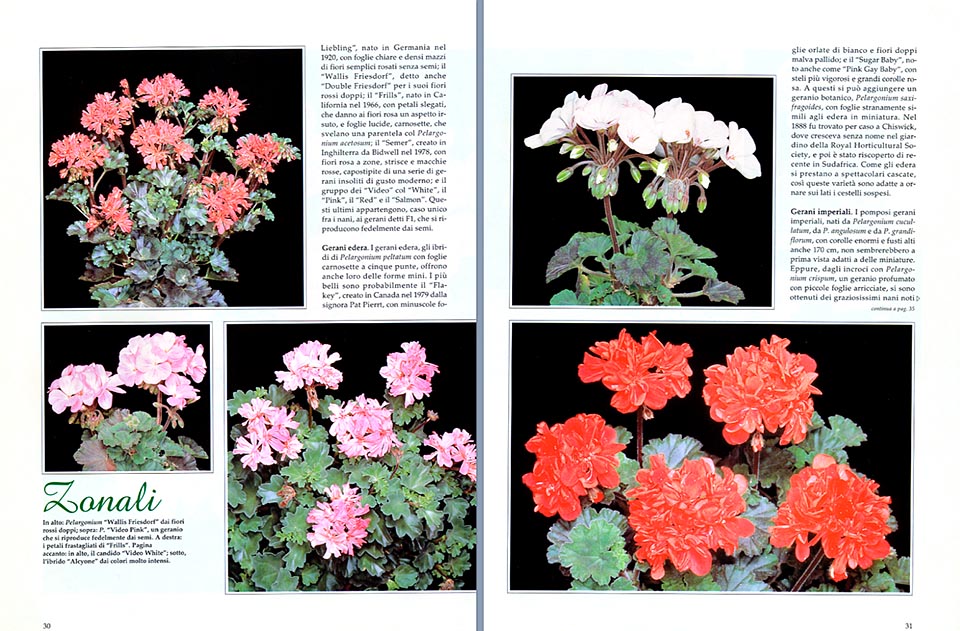 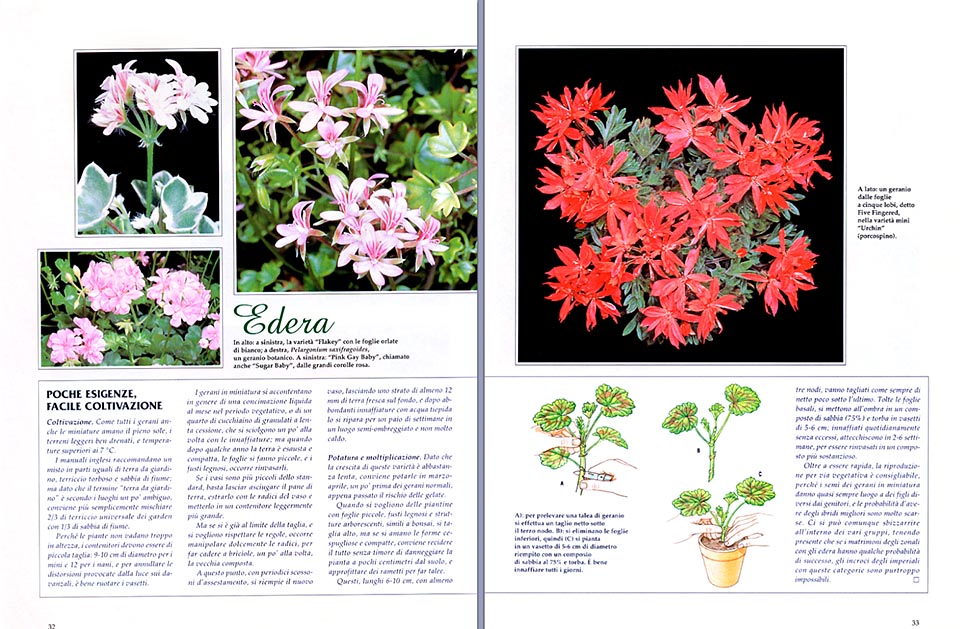 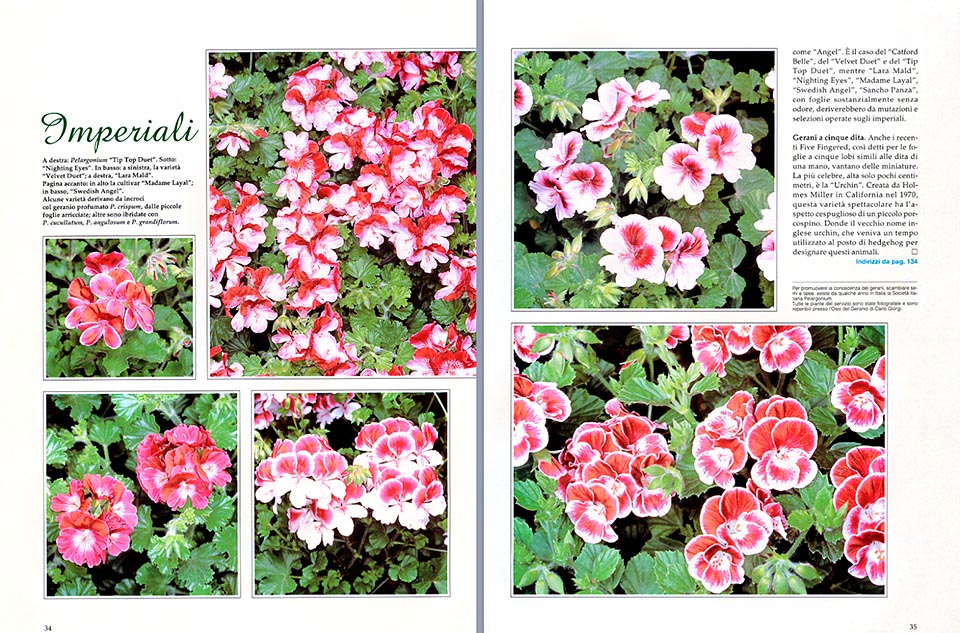 Mini geraniums. Why? Because of the desire the man has of the “different”, but, mainly, for a practical consideration.

Even if they cause the admiring looks of the passers-by, the geraniums at the windows, in fact, reduce the view, and when, from the usual “giants” of 30-80 cm, we change to varieties of 5-23 cm, called, after the size, “mini”, or “dwarf”, the effect from the interior is more pleasing.

Small leaves with often showy flowers; rather slow-growing plants, with scarce exigencies of up keeping, earth, and water.

The mini geraniums have all the qualifications to please to whom, not disposing of a terrace or a balcony, wishes to get the joys of gardening on the window-sill. Result of wise cross breeding and mutations, they are present in almost all the categories of the cultivated geraniums, and for their modest encumbrance, they are very much appreciated by the collectors. Let us see the most important ones.

Many varieties of small size have been isolated in the group of the “Zonal”, the classical geraniums with roundish kidney-shaped leaf, with a green-blackish or bronze median zone. Between these ones, two minis are conspicuous, the ‘Mephistopheles’, created in the distant 1893, with almost black leaves and blazing red simple flowers, and the ‘Alcyone’, of origin preceding the 1966, with double flowers with a more intense colour.

Somewhat bigger, but usually not taller than 20 cm, are the ‘Petit Pierre’, known also as ‘Klein Liebling’, born in Germany in 1920, with clear leaves and thick bunches of simple, pink, seedless, flowers; the ‘Wallis Friesdorf’, called also ‘Double Friesdorf’, for its double red flowers; the ‘Frills’, born in California in 1966, with double, loose petals, which give the pink flowers a shaggy appearance, and fleshy, shiny leaves, which disclose a relationship with the Pelargonium acetosum; the ‘Simer’, created in England by Bidwell in 1978, with pink flowers with zones, strips, and red dots, ancestor of a series of unusual geraniums of modern taste; and the group of the ‘Video’, with the White, the Pink, the Red and the Salmon.

These last ones, with a look, on the whole, traditional, belong, unique case between the dwarfs, to the geraniums called F1, which reproduce accurately from the seeds.

The “Ivy Geraniums”, the hybrids of the Pelargonium peltatum, with fleshy, five pointed leaves, offer, they too, some mini forms.

The most beautiful are, probably, the ‘Flakey’, created in Canada in 1979, by Mrs. Pat Pierrt, with small leaves bordered of white and double, pale mauve flowers; and the ‘Sugar Baby’, known also as ‘Pink Gay Baby’, with more vigorous stalks and large pink corollas.

We can add to the above, a botanical geranium, the Pelargonium saxifragoides, with leaves curiously similar to the mini “Ivy”. It was found, by chance, in 1888, at Chiswick, while it was growing, without name, in the garden of the Royal Horticultural Society, and than, has been rediscovered, recently, in South Africa.

As the classical “Ivy” are suitable, due to their long creeping stalks, for spectacular cascades of flowers from the balconies, so these varieties are very fit for decorating, on the borders, the suspended small pots and baskets.

The pompous Royal Geraniums, born from the Pelargonium cucullatum, the angolosum and the grandiflorum, with enormous corollas and stems tall even 170 cm, would not seem, at first, suitable for some miniaturizations.

Nevertheless, from the cross breeding with the Pelargonium crispum, a perfumed geranium with small curly leaves, they have obtained very charming dwarfs known as “Angel”.

This is the case of the ‘Catford Belle’, the ‘Velvet Duet’, and the ‘Tio Top Duet’, whilst other varieties such as ‘Lara Mald’, ‘Nighting Eyes’, ‘Madame Layal’, ‘Swedish Angel’, ‘Sancho Panza’, with leaves substantially odourless, should come from mutations and selections done directly on the Royals.

Also the recent “Five Fingered”, so called due to the five-lobe leaves similar to the fingers of a hand, have their minis.

The best known, tall only few centimetres, is the ‘Urchin’. Created by Holmes Miller in California in 1970, this spectacular variety, with nice intense red petals, has a bushy appearance like a small porcupine. Whence, the old name “urchin”, which was once used in lieu of “hedgehog”, to designate these animals.

Like all geraniums, also the minis love the full sun, the light and well drained soils, and temperatures over the 7°C.

English manuals recommend a mixture in equal parts, garde, earth, peaty loam and river sand; but, since the term “Garden earth”, is, depending on the locations, rather ambiguous, it is simply more convenient to mix 2/3 of universal loam of the garden with 1/3 of river sand.

In order that the plants do not become too tall, the containers must be of small size: 9-10 cm of diameter for the minis, and 12 for the dwarfs, and in order to annul the distortions caused by the light on the sills, it is good practice to rotate periodically the small pots.

Mini geraniums usually content themselves of a liquid manuring per month during the vegetative time, or of a quarter of tea-spoon of slow transfer granules, which dissolve, a little at a time, with the watering; but, after some years, the earth is exhausted and firm, the leaves become small, and the stems woody, it is necessary to change of pots.

If the pots are smaller than the standard, it is enough to allow the earth to dry up, take it off from the pot with the roots, and place the whole in a slightly bigger container.

But if we are already at the limit of the size, and we want to respect the rules, it is then necessary to manipulate gently the roots, in order to let fall in crumbs, slowly slowly, the old compound. Then, with periodical jolts of settlement, we shall fill up again the pot, leaving a layer of at least 12 mm of fresh loam on the bottom, and after abundant watering with lukewarm water, we shall shelter it in a semi-shaded place, for a couple of weeks.

Seen that the growth of these varieties is rather slow, it is better to prune them in March-April, shortly before the normal geraniums, as soon as the risk of frosts has passed.

When we want to get small plants with tiny leaves, woody stems and arborescent structures, similar to the bonsai, we have to cut high; but if we love bushy and compact forms, it is better to cut the whole at a few centimetres from the ground, and profit of the small branches to do some cuttings.

These ones, 6-10 cm long, with at least three nodes, are to be cut, as always, sharply, just under the last node. Taken off the basal leaves, they have to be placed in the shade in a compound of sand (75%), and peat in small 5-6 cm pots, and watered on a daily basis, without excesses, take root in 2-6 weeks, to be then changed of pot, in a more nourishing compound.

Besides being fast, the vegetative reproduction is advisable, because the seeds of mini geraniums generate, almost always, offspring which differ from the parents, and the chances of getting better hybrids are very poor.

However, we can amuse ourselves inside the various groups, keeping in mind that if the marriages of the Zonal with the Ivy, have some probability of success, the cross breeding of the Royal with these categories, are, unluckily, impossible.

Miniature geraniums: not high more than 23 centimetres was last modified: May 24th, 2019 by Giuseppe Mazza