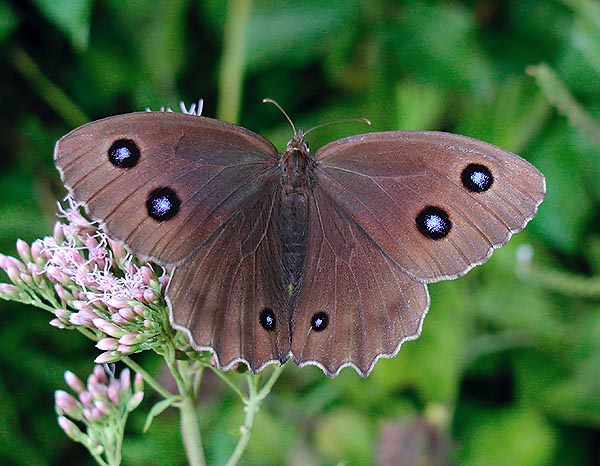 Minois dryas is found in the temperate areas of Europe and Asia, up to Japan © Giuseppe Mazza

The Dryad (Minois dryas  Scopoli, 1763), (the dryads were mythical creatures of the woods, the nymphs of the oaks) is a diurnal butterfly, afferent, therefore, to the group of the Rhopalocers (Rhopalocera).

Taxonomically, it is obviously afferent to the order of the Lepidopters (Lepidoptera), family Nymphalids (Nymphalidae), genus Minois Hübner, 1819.

It is present in the temperate climate areas of Europe and Asia, up to Japan.

It is a species characterized by diurnal flight. It specifically frequents the sparse temperate forests, the heaths and the grasslands.

The males of this particular butterfly are smaller and darker than the females, with smaller ocellated spots. Moreover, the corrugations on the margins of the hind wings are more marked in the females. These are characters of permanent somatic sexual dimorphism. 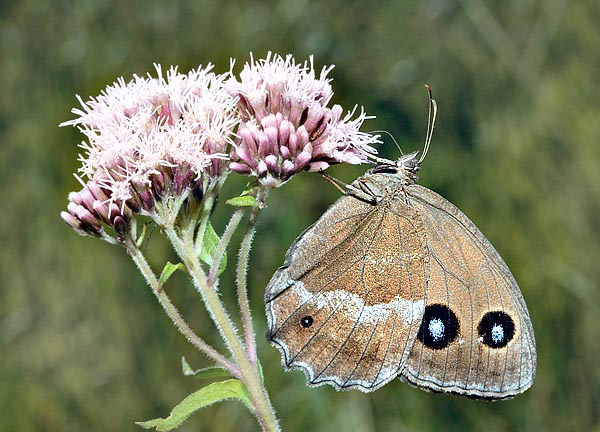 Female seen from the side. Caterpillars eat graminaceae © Giuseppe Mazza

The blue centres inside the ocelli, in both sexes, distinguish them from like species. The wingspan is 5-7 cm. The lower side is paler, at times with grey stripes on the hind wings. The antennae are filiform, ending with a club.

The adult is active from early summer to early autumn, especially in the months of July and August. The caterpillar is dirty white with dark patterns and two blackish stripes extending on the forked tail.

It may be found in May on various graminaceae, such as Avena elatior, and species of the genera Bromus, Dactylis, Poa, Lolium, Molinia, etc.

The pupa, elongated and oval, is reddish brown.