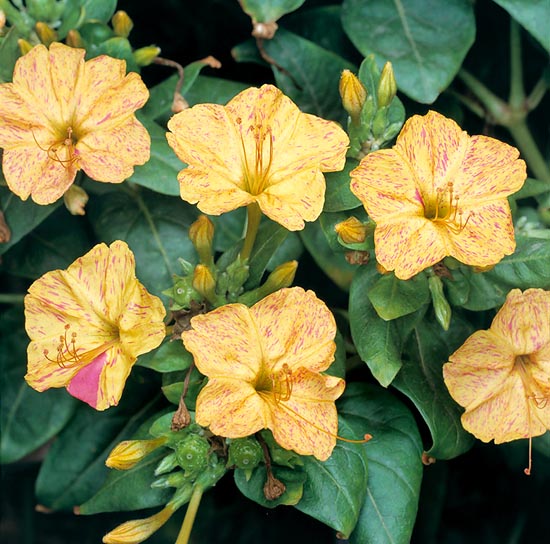 The exact place of origin is unknown; it is thought to be Mexico.

The name of the genus is the Latin term “mirabilis” = remarkable, surprising, with reference to the lively and variable colours of the flowers; the name of the species comes from that of the city of Xalapa, from where was imported in Europe, for the first time, a medicinal root with laxative properties which was supposed to belong to this plant, later on, in reality, identified with that of the Ipomoea jalapa (L.) Pursh.

The Mirabilis jalapa L. (1753) is an herbaceous perennial bush, much ramified, with erect branches up to about 1 m long, and vertical, tuberous root, blackish, even more than 20 cm long.

The leaves are simple, opposite, ovate with sharp apex and cordate base, long up to 12 cm and up to 5 cm broad, of intense green colour on the upper page, pale green below. The hermaphrodite flowers, grouped in terminal cymes, have no corolla; the function of attracting the pollinators is taken by the funnel-shaped, petaloid calyxes, of 4-6 cm of length and 2-3,5 cm of diameter, formed by the 5 sepals, merged, of various colours, white, yellow, pink and red, streaked or bicolour at times, even different on the same plant.

The flowers open by late afternoon and close in the morning, excepting the very cloudy days when the opening may be anticipated, and are intensely perfumed; the pollination is done by moths and hummingbirds. The fruits are ovoid, wrinkled and warty achenes, 6-10 mm long, of dark brown or black colour. 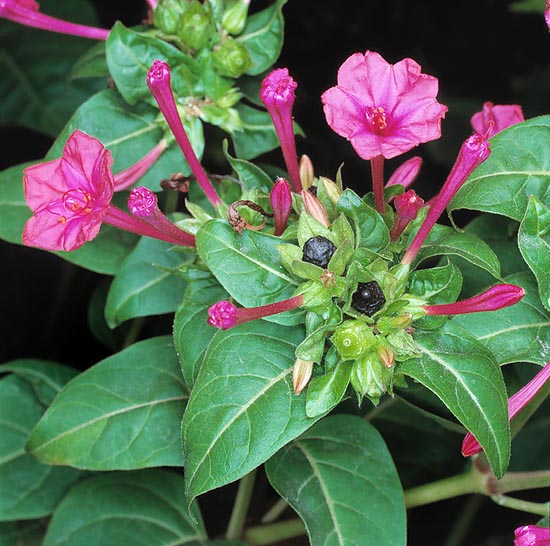 It easily reproduces by seed, kept in water for one night before seeding, to be placed superficially in a perfectly draining soil, kept humid; the germination takes place in 1-3 weeks at the temperature of 18-20 °C.

It easily self-seeds also in poor soils and often does colonize ruins areas; in some zones it has become infesting. Species of easy cultivation, it is suitable from tropical, subtropical and warm temperate climates, where it may rest, at the level of the root, to some degrees below 0 °C, especially if well mulched.

In order to get a best growth, it requires an exposition in full sun, it adapts also to partial shade, but in this case the foliage is less thick and the flowering is more sparse.

It is not particular about the soil, provided the same is draining, is resistant to the high temperatures, to periods of dryness, if well rooted, and to the saltiness, therefore it can be employed in coastal gardens.

Where the climate does not allow the outdoors staying, it can be treated as annual, thanks to the short period, three months about, elapsing between the germination and the first flowers; when seeding by the early spring in a sheltered habitat, the blooming begins in July and lasts till late autumn. Alternatively, the tuberous roots can be extracted from the soil in autumn for conserving them till the following spring, but such operation is rarely done, seen the facility with which the plant is obtained by seed.

It also adapts to the cultivation in pot, in sandy soil rich of organic substance, draining, with regular and abundant waterings during the vegetative period. The Mirabilis jalapa has been one of the most popular ornamental plants in the XVII and XVIII centuries; it has also been utilized in the studies concerning the characters of the colours of the flowers.

All the parts of the plant are utilized in the traditional medicine, in particular, the tuberous roots for the purgative and antibacterial properties; the seeds are poisonous if ingested, due to the presence of neurotoxic substances.

Mirabilis jalapa was last modified: May 24th, 2019 by Giuseppe Mazza