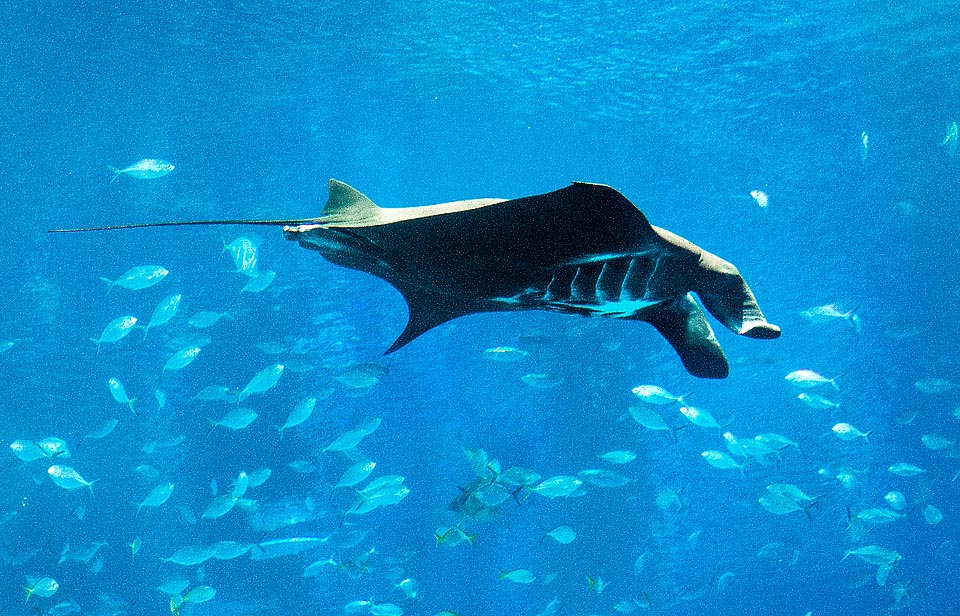 Mobula alfredi is usually present not far away from the coasts, in all tropical and subtropical waters of the Indian and Pacific Oceans, including the Red Sea © G. Mazza

The Reef manta ray [Mobula alfredi (Krefft, 1868)] belongs to the subclass of the Elasmobranchii, cartilaginous skeleton fishes, order of the Myliobatiformes and to the family Myliobatidae, characterized by big pectoral fins, similar to sharp pointed wings, ovoidal trunk-encephalic area neatly emerging from the pectorals, small dorsal fin and long whiptail, without caudal fin and enriched, in some species, with a poisonous sting. 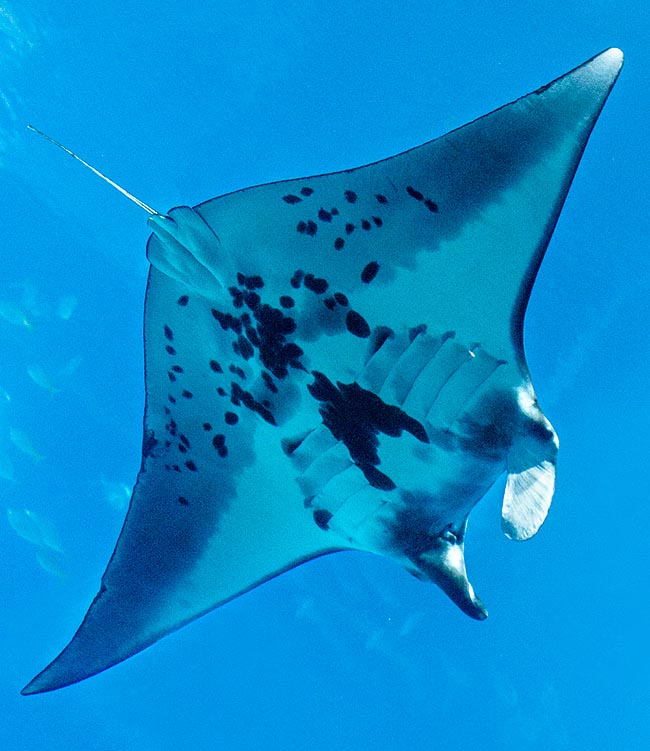 The maximum reported width between the apices of the pectorals is of 5,5 m, the average one is of 4 m © G. Mazza

Like almost all Myliobatiformes the slits do open in the ventral part whilst the spiracles emerge dorsally.

The pectoral fins surround the head, the nictitating membrane is absent and the muzzle is equipped with electroreceptive organs.

The name of the species is honoured to the Prince Alfred of Saxe-Coburg and Gotha, who, when commanding the frigate HMS Galatea, with this ship travelled around the world (January 1867 – June 1868).

The  name Reef manta ray specifies that, contrary to its relative, Mobula birostris, (from which only in 2009 has been recognized different), the area it mainly frequents is the one close to the reefs.

It’s present, usually not far away from the coasts, in all the tropical and subtropical waters of the Indian and Pacific Oceans, including the Red Sea and the Persian Gulf. Instead, it is absent from the Atlantic and the American coasts of the Paific where lives the Mobula birostris.

The Mobula alfredi lives at depths included between the surface an the 120 m, where, while swimming, stocks up on plankton that conveys into the enormous oral “furnace” utilizing the ample cephalic fins.

To wallow in this living broth, besides procuring lavish meals, may present problems: in this case there are small parasites that cling to the skin of the manta, bringing a lot of trouble. However, it does not give up and for getting rid of them recurs at time the hard ways. 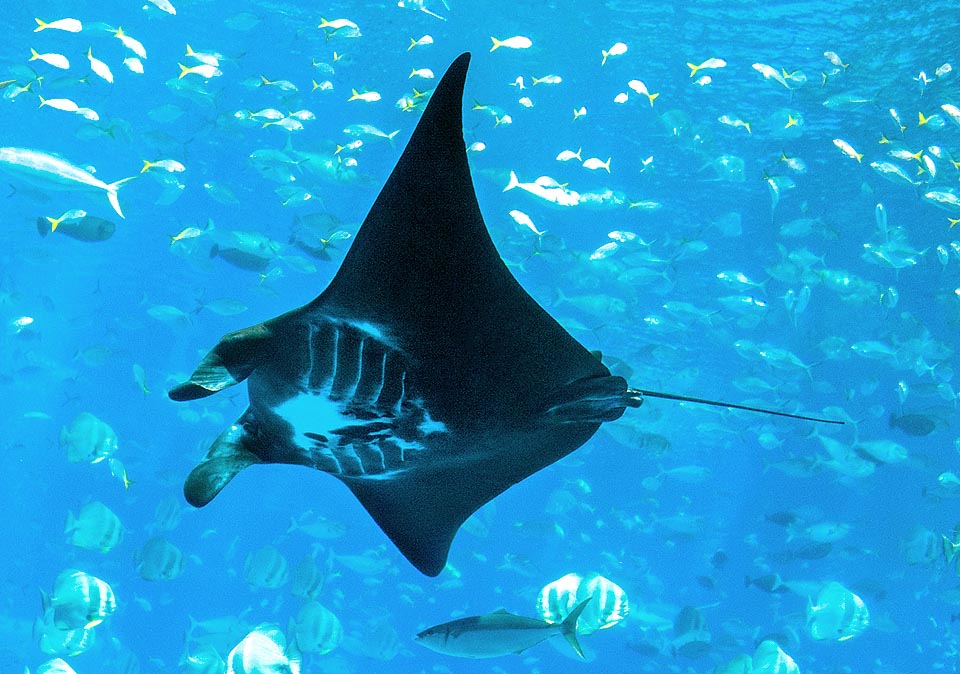 The abdomen is of a more or less marked white, dotted of dark spots of variable size at times very extended almost up to the melanism © Giuseppe Mazza

By then, it may be seen making spectacular leaps out of the water; the strong body, weighing hundreds of kilos, splashes from the waves and falls there back with a thunderous roar.

When the violent method does not bring the expected fruits then it turns to the cleaning stations. These ones, unlikely our service stations where the driver fills up the tank, refuel the station staff, usually wrasses that, when the client gets close to their “pumps”, jump quickly on the bodywork to clean it up from the small animals that lurk there. 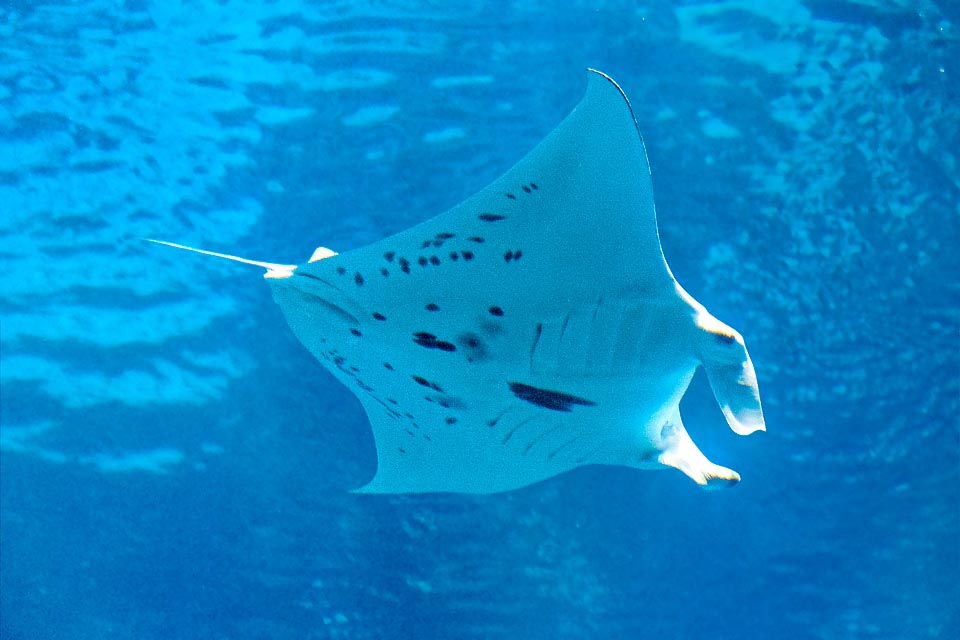 These spots, typical to every specimen, like fingertips, have allowed us to know some migratory routes and the longevity of the species, of at least 40 years © G. Mazza

The maximum width reported between the apices of the pectorals is of 5,5 m, the average one is of about 4 m, quite far from the records of the Mobula birostris, whilst the length of the whiptail depends on the kindness of the sharks that threaten it. When it is intact it measures about the 123% of the trunk-cephalic length. 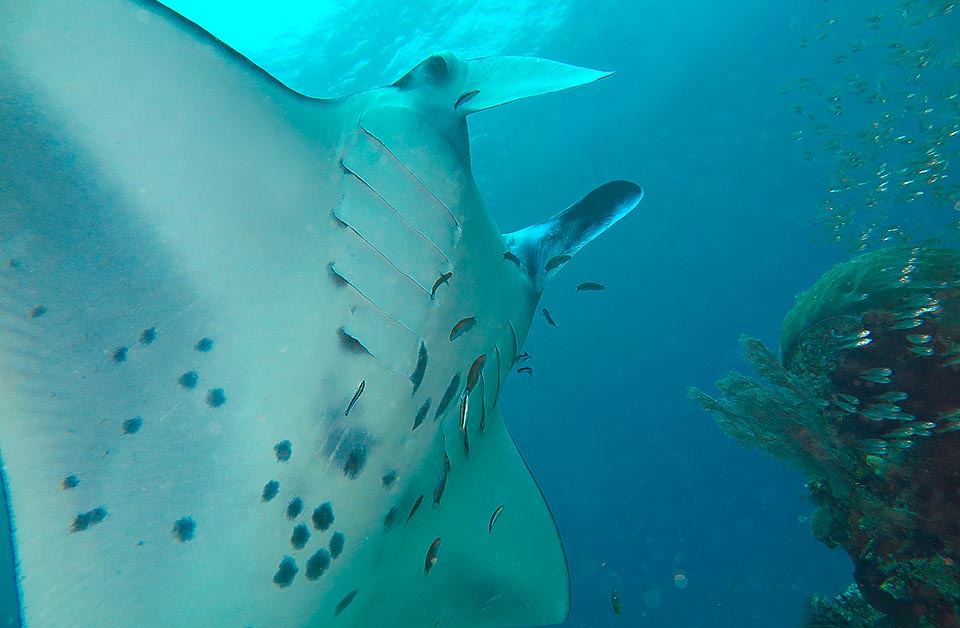 The two great cephalic fins stretched forward bend like webbed hands and convey, like a big mobile funnel, the planktonic soup to the mouth © Giuseppe Mazza

The colour of the back is black, with paler zones on the hind margins of the pectorals and, on the “nape” where meet the two biggest whitish spots coming from the sides of the head.

The abdomen is of a more or less marked white and is dotted with dark spots of variable size, that photographed and used as “fingerprints” of the fish have achieved as a result the learning of some migratory routes, of the distances covered and of the age of the specimen. 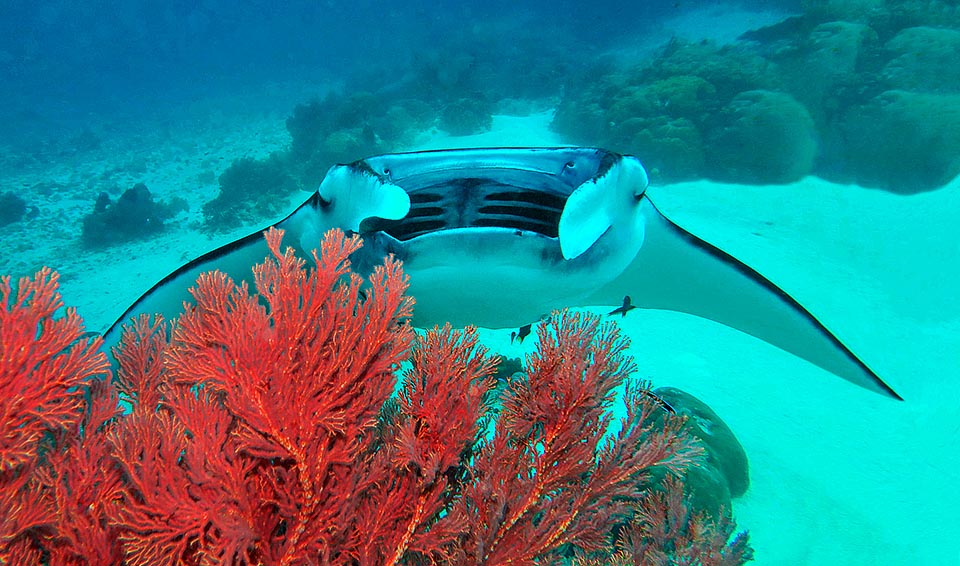 When meeting it under water, the most striking particular is the incredible oral cavity displaying from inside the huge slits of the gills and the cartilagineous frame of the dorsal part. Once considered as dangerous, nowadays has gone back in the collective imaginary to that good giant it has always been © Sebastiano Guido

An about twenty years old Reef manta ray, for instance, has been recognized and photographed twenty years after the first photo and has thus permitted to estimate in about 40 years the longevity of the fish.

Furthermore, it has happened to meet melanistic specimens, with black abdomen with few white spots. 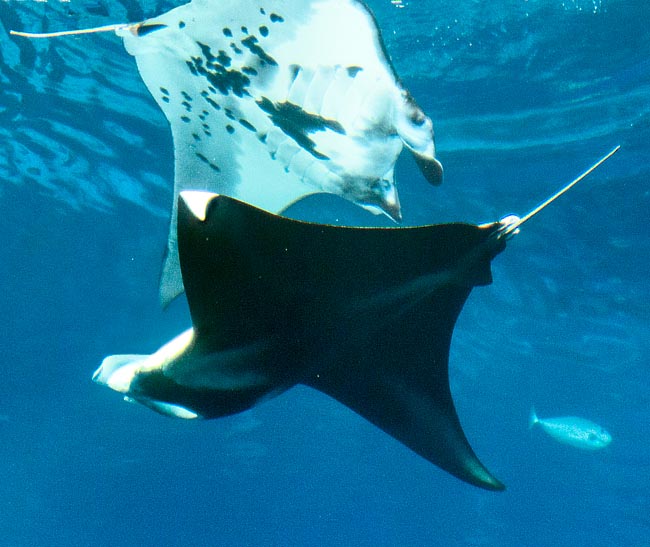 In addition to the majesty of the “flight”, that with slow wingbeats allows the fish to effect showy manoeuvres, when met under water the most striking particular is the unbelievable oral cavity that shows inside the huge slits of the gills and the cartilaginous framework of the dorsal part.

The two big cephalic fins stretched forward band as webbed hands and convey, as if they were a big mobile funnel, the planktonic soup to the mouth.

The inside of the oral cavity hosts about 300 rows of tiny teeth, of the size of a pinhead that serve to the males for holding the ladies during the most intimate moments. The whiptail is bare and is surmounted in the insertion point by the only one small dorsal fin.

Once considered as a dangerous fish that embraced with its powerful fins the swimmers drowning them, nowadays thanks to the evolution of the underwater science and to the increased number of “wet” researchers, this rumour has been debunked, and the animal has gone back also in the collective imagination to be that good giant it has always been.

There are still dissent rumours, but these come from the planktonic animals that actually are not comlpletely wrong, seen that every manta eats as an average a thirty kilos of them per day.

The only danger to us may be due only to a wrong behaviour. A diver who annoys such a big fish might be hit by a very violent blow, even inflicted unintentionally, by a fin or by the tail of the escaping animal. 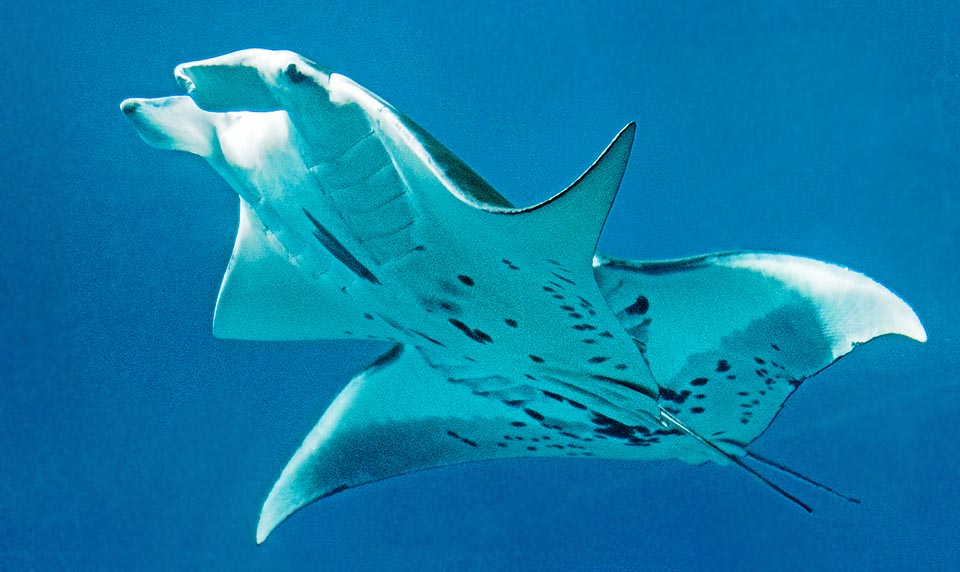 300 rows of tiny teeth, as big as a pinpheads, serve for clinging to the pectoral of the female and swim overlapped for mating © Giuseppe Mazza 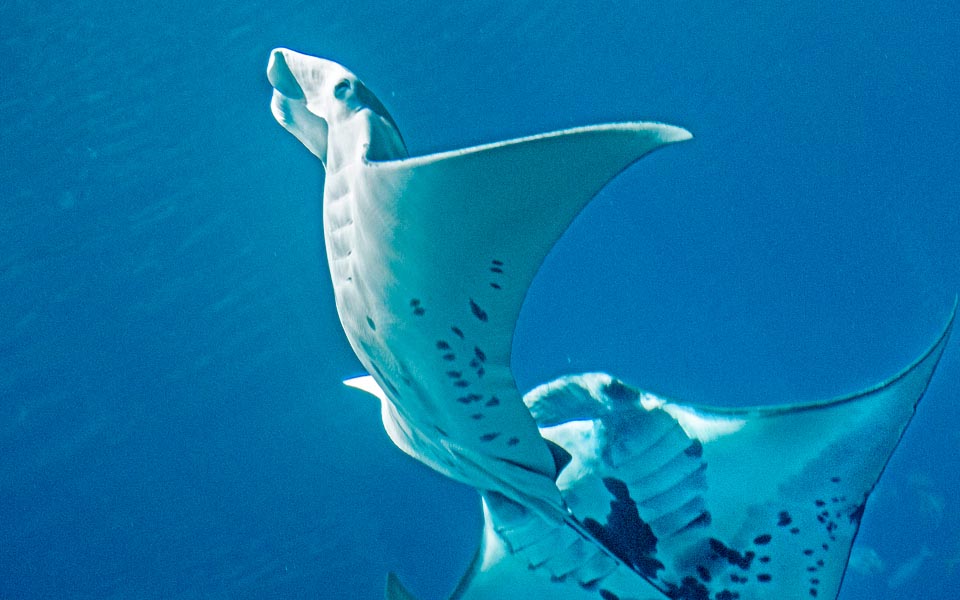 This lasts about 90 seconds as the male, once done the internal fecundation, must leave it to resume breathing © Giuseppe Mazza 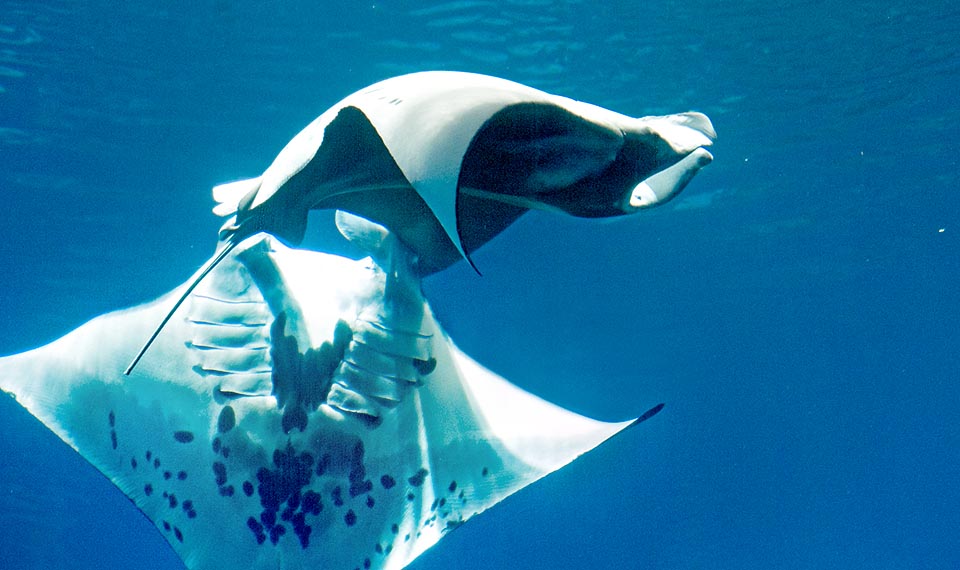 Here it is in full ventilation whilst the female leaves it continuing, with an upside down, the roundabout of the preliminaries © Giuseppe Mazza

Besides the parasites afflicting it, the Reef manta ray does not have natural foes, excepting some Tiger shark (Galeocerdo cuvier) who tries to amputate its tail or tries to attack battered specimens.

Of course, also the man is one of its predators. Even if they try to protect it with programmes of conservation, every year are slaughtered about 500, mantas and similar species, to produce the Peng Yu Sai, a “miracolous” soup, done with the dried gill plates that should have the supernatural power of purifying the blood, defeat many toxins and strengthen the immune system. 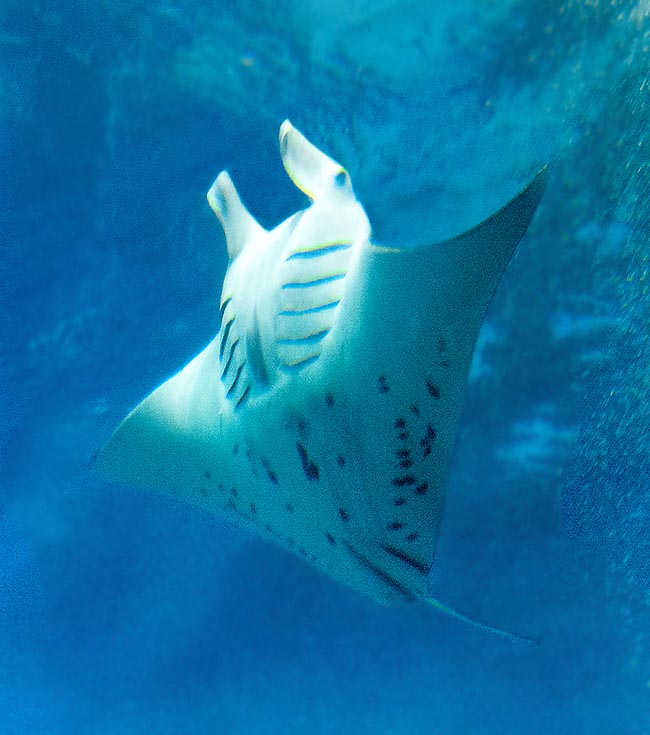 Mantas are ovoviviparous and this one will deliver one or two pups, after an estimated gestation of 9 to 12 months © Giuseppe Mazza

If then we add the mirage healings from chickenpox and skin diseases, the game is over and unluckily, when it’s the man who plays, all animals are losers.

The hope is that, besides the already proposed sensational virtues, does not come to the head of some eastern gentleman the idea of further increasing the business, indicating the soup of gill plates as “substitute of some blue pills”.

Luckily, besides the moneymakers, do exist also programmes such as the Manta Trust, that row against the current for the conservation of these giants.

The organization has achieved important results like the foundation of the protected marine areas of Hanifary Bay and Anga Faru, in the atoll of Baa in the Maldives, that stand among the main sites of reproduction of the mantas (and now appear as Unesco Biosphere Reserve).

In these locations hundreds of mantas begin to gather during the rain season, when the climate and the currents multiply exponentially the planktonic broth.

The great meetings are preparatory to the couplings. One or more males chase the female the winner will fecundate, holding with the teeth the tip of a pectoral. The rite is very short, because the lucky must breathe, and gets over in about ninety seconds.

Then she (who is ovoviviparous) will deliver one or two pups, after an estimated period of 9 to 12 months. The resilience of the species is low and the doubling time of the population may vary between 4 and a half years and 14. The vulnerability to fishing index is extremely high, reaching the rate of 76 on a scale of 100.