Monaco-Ville and geography of the Principality of Monaco 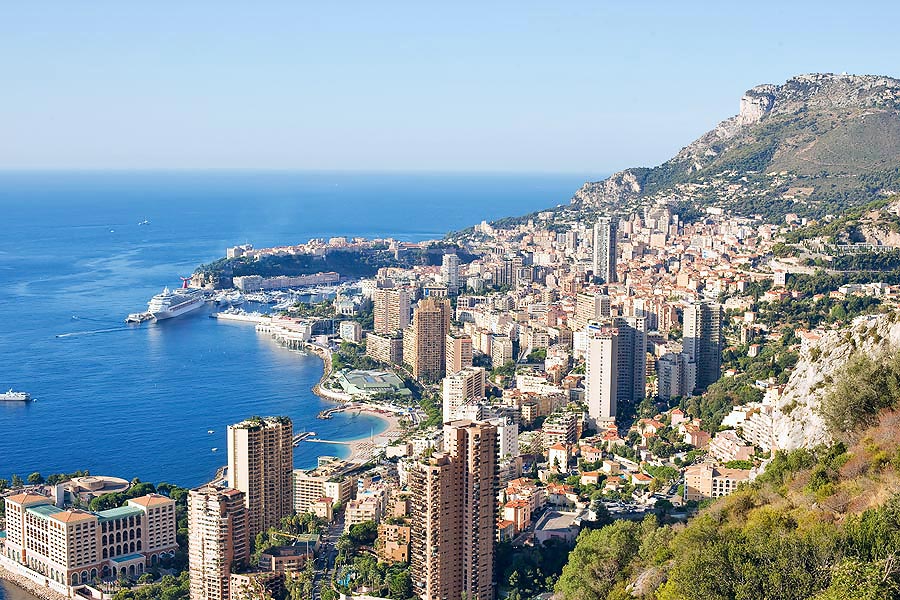 The Principality of Monaco seen from east 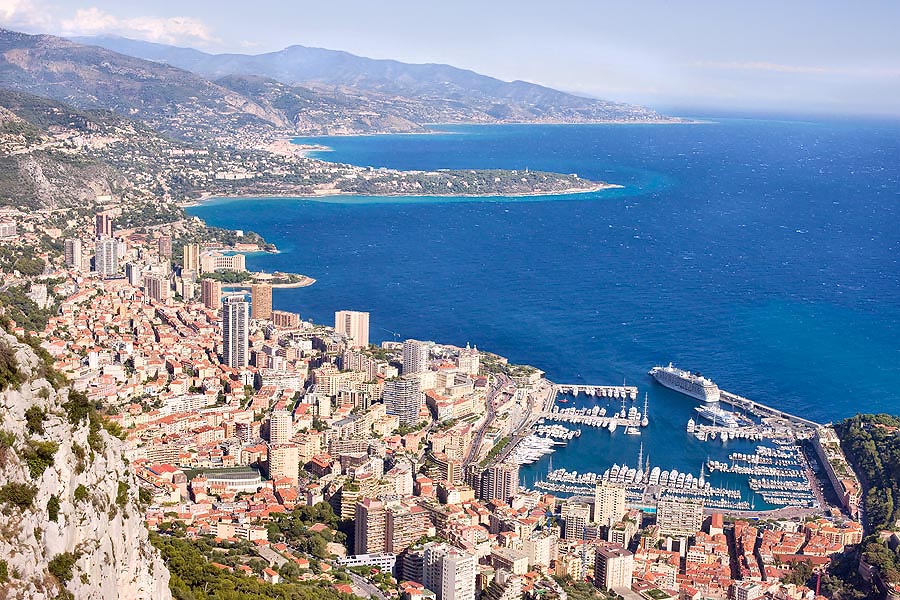 The Principality of Monaco seen from west

Monaco: the coast from Italy to Cap d’Ail

Monaco, as seen from La Turbie, and an unusual outline of the Tête de Chien

Monaco, on the left, and the 18 holes Monte Carlo Golf Club, located at 900 m of altitude 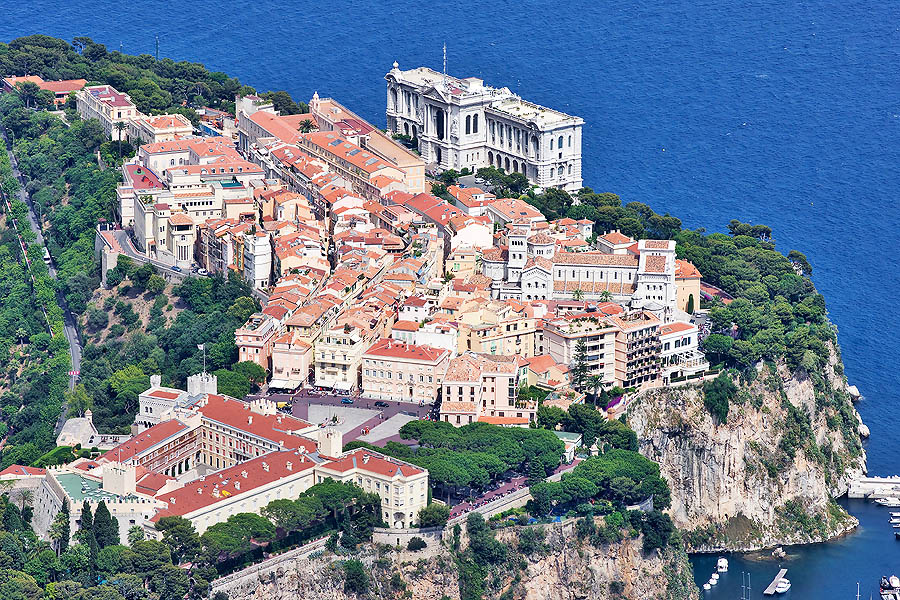 Monaco-Ville with the Princes’ Palace and the Oceanographic Museum

The outline of Monaco Ville seen from the Port Hercule

Monaco-Ville: the square with the Princes’ Palace

Monaco-Ville: the Princes’ Palace square on November 19th, on occasion of the National Holiday 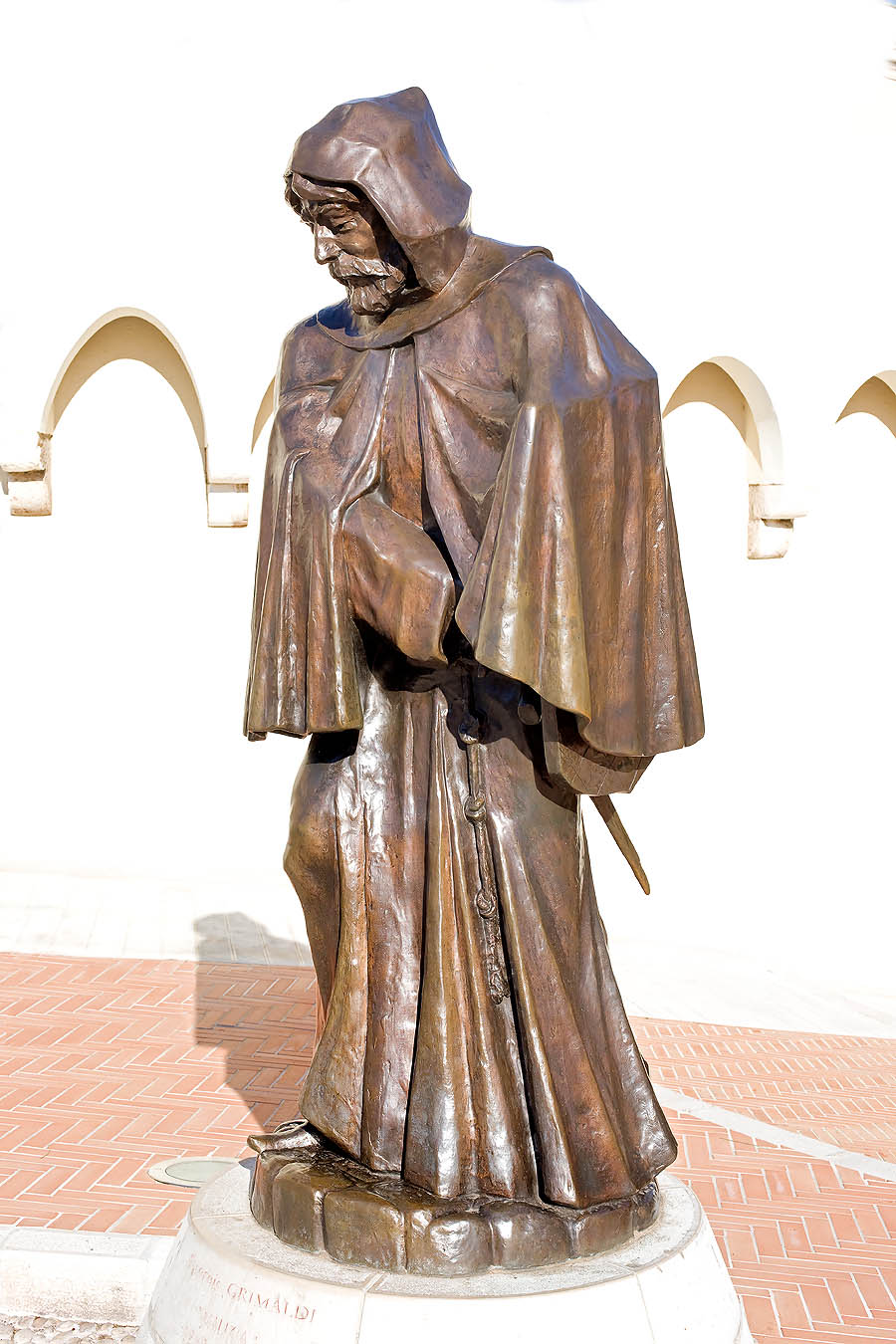 Monaco-Ville: the statue of François Grimaldi, called Malice, done by Kess Verkade, was inaugurated on Jan. 8th, 1997 on the Princes’ Palace Square for commemorating the 700th anniversary of the Grimaldi Dynasty. Disguised as a monk, he was able to get the guard station open, and to conquer the fortress, which, in this way, passed from the hands of the Ghibellines to the Guelphs’ ones.

Monaco-Ville: the Law Courts, and the Cathedral

Monaco-Ville: side entrance to the Cathedral, the Law Courts and St. Nicolas Square 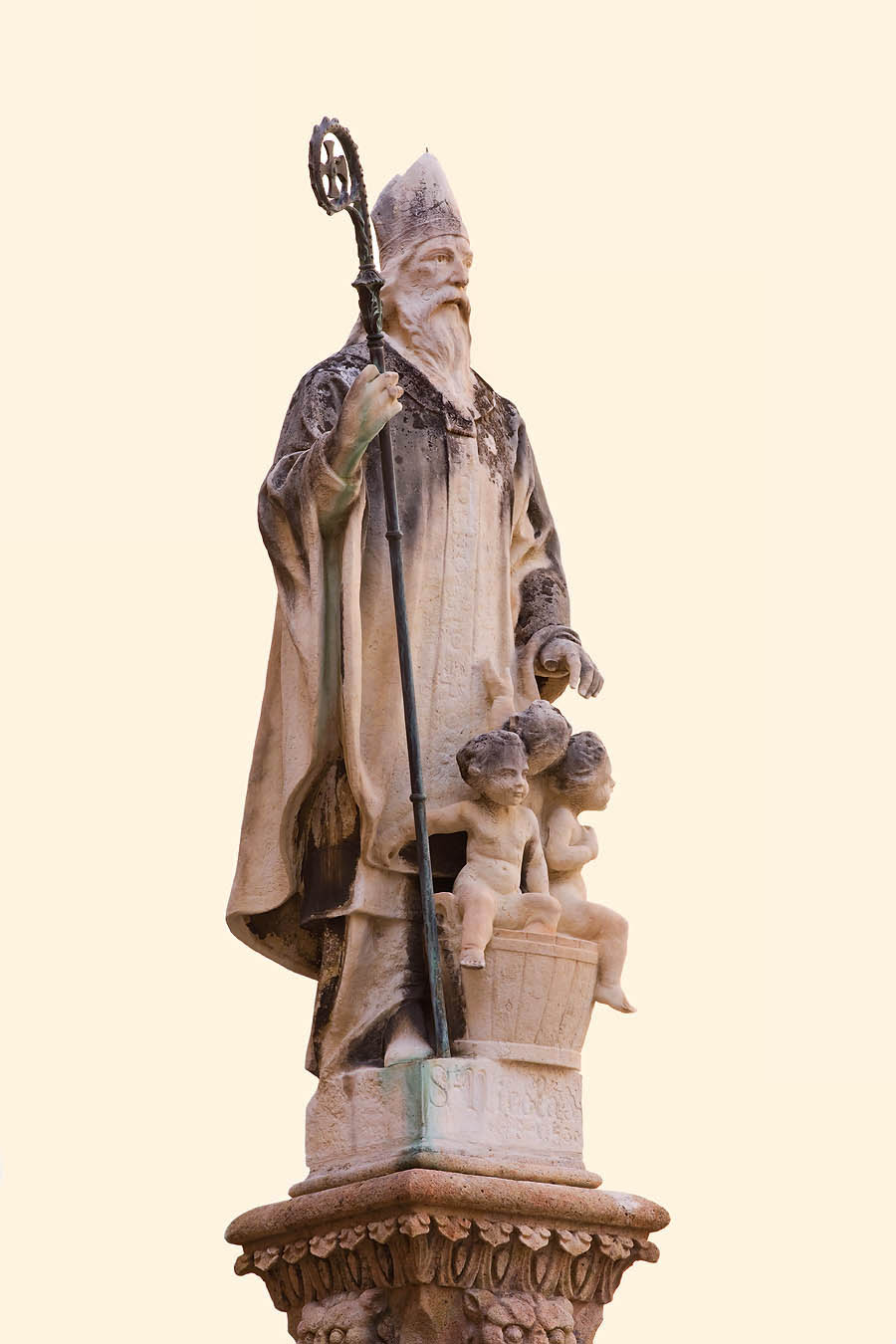 Bassignani’s work, the statue of St. Nicholas, patron of seamen and children, and of Monaco along with St. Devota, surmounts the fountain of the square which holds the same name in Monaco-Ville.

Monaco-Ville: Visitation Square, with the Department of State 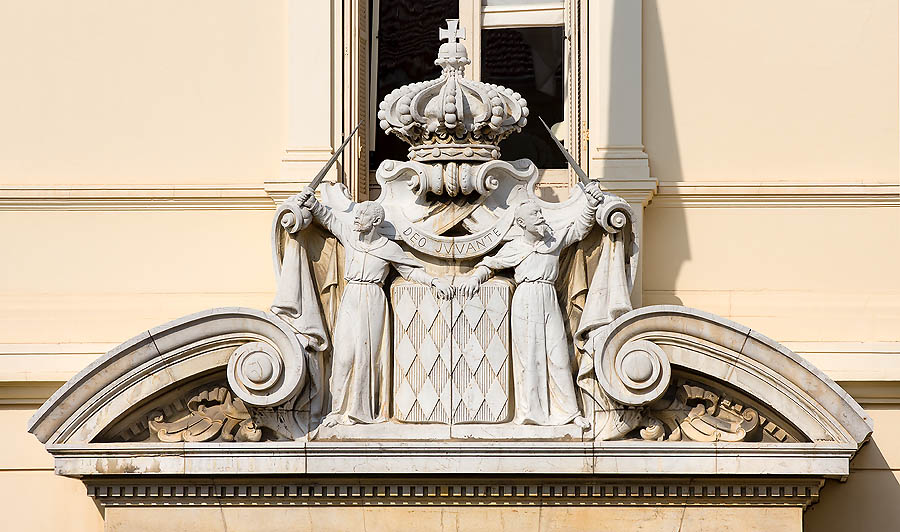 Monaco-Ville: details of the Ministère d’Etat Palace, with the Grimaldi Coat of Arms 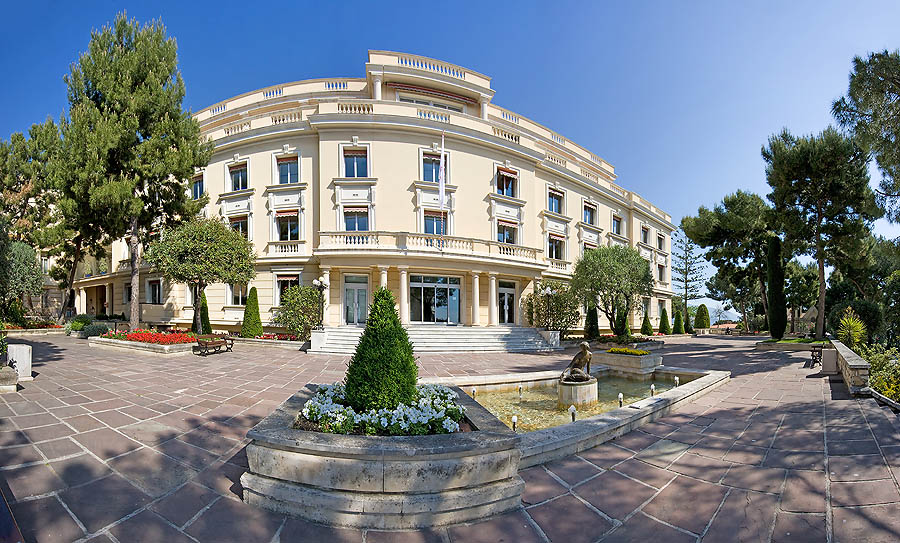 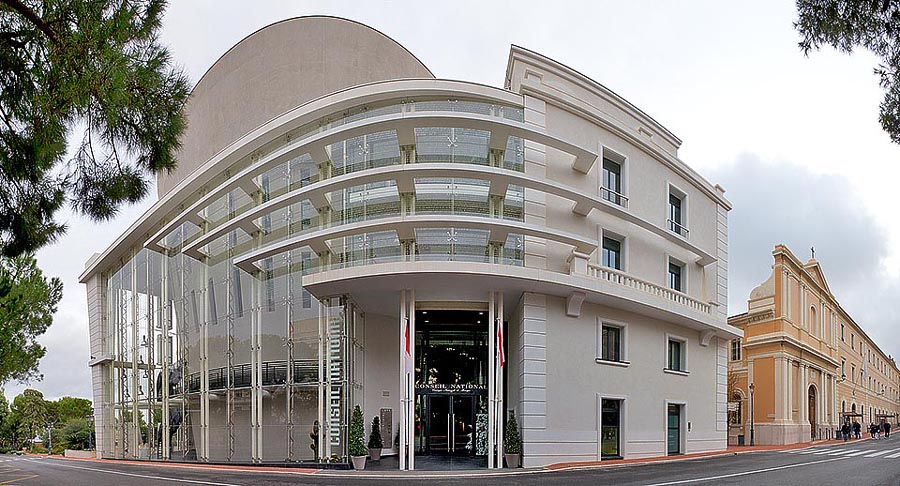 The “Carugi d’a Roca”, in Monaco-Ville 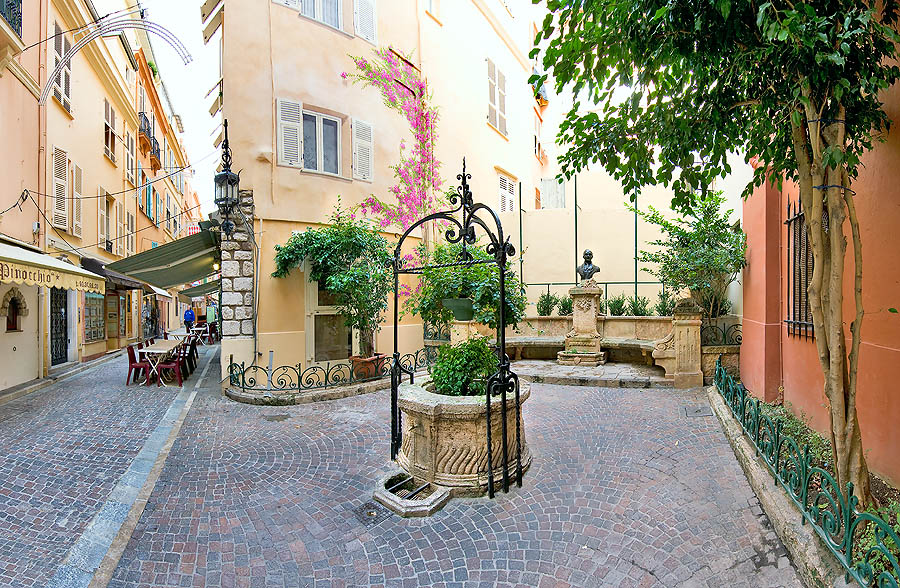 Monaco-Ville: the “Piaçeta Bosio” with its water well, once active, recalls François-Joseph Bosio, Monégasque sculptor. He worked in Monaco, in Italy and in Paris, where he became famous for his bust of the Empress Joséphine and the equestrian statue of Louis XIV. Louis XVIII ordered him the bronze quadriga on the Arc de Triomphe du Carrousel, Paris. In 1828, he was made Baron of the French Monarchy by Charles X. 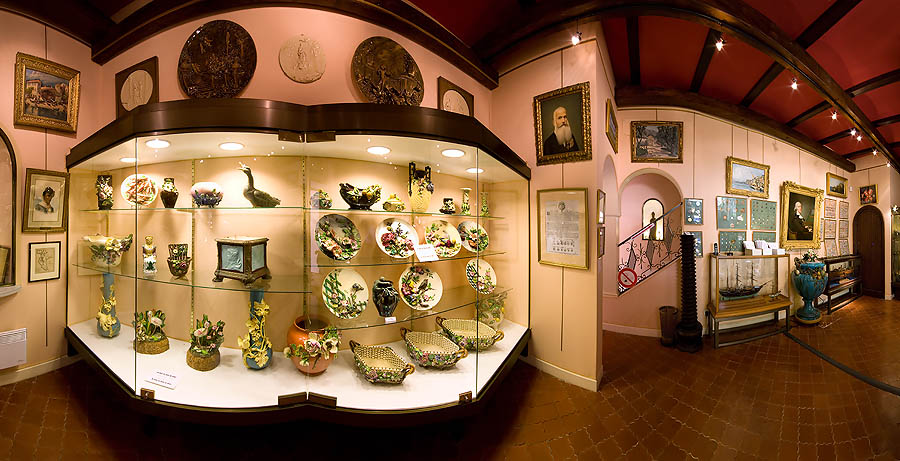 Several ceramics of the old “Poterie de Monaco” are exposed in the Museum of ancient Monaco, located at the number 2 of Emil de Loth street in Monaco Ville.

The most valued pieces are those realized by Ernesto Sprega (1829-1911), who was its director from 1883 to 1889. Of Roman origin, he was a pupil of the famous master Mantovani, and later operated in Florence for Ginori, eminent painter and ceramist.

Ernesto Sprega, shown in the self-portrait on top at the right of the show-case, created, during his stay in Monaco, several ceramics and paintings.

He made himself known mainly for the “cannage”, an absolutely personal technique giving the pots and baskets a graceful look, very similar to the true ones, pleached with straw and rushes. This technique, along with his never-ending research for new forms and colours, brought him several acknowledgements while representing Monaco in International Exhibitions.

Besides as talented ceramist, Ernesto Sprega is to be remembered for his numerous frescoes in the Palatine Chapel and in the Private Apartments of the Princes’ Palace. 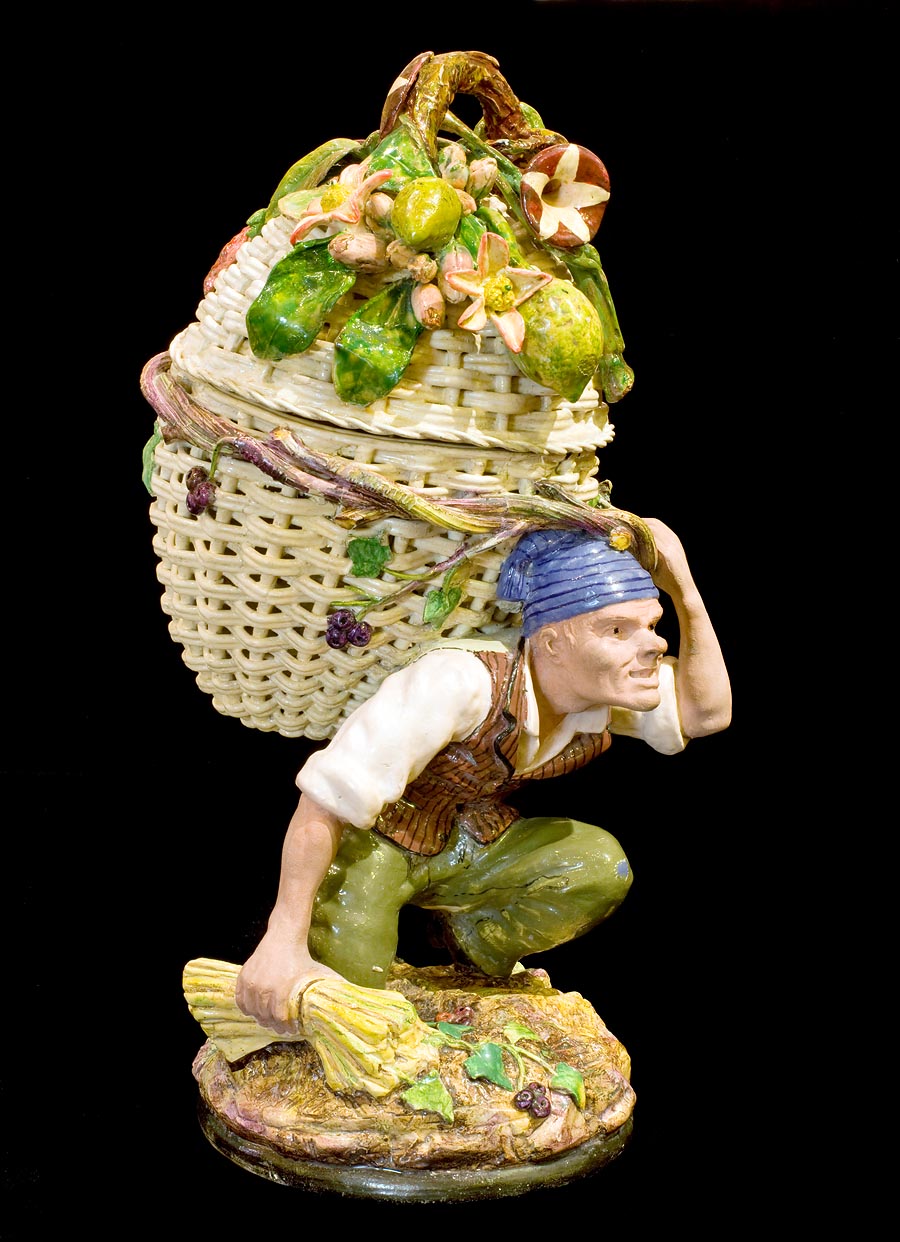 The “Egg of Monaco” by Ernesto Sprega, awarded at the 1889 Universal Exposition of Paris

Between 1524 and 1641, during 117 years, the Principality of Monaco was under the more and more intrusive protection of Spain. Only one remembrance of that time stands in Monaco-Ville, in the Passage of the Misericorde. Over the door of an ancient house, we read, in a mixture of Spanish and Italian languages: “15th March 1548. Deo Juvante. Pietro Carbonero. All earthly things pass by quickly, but fame and glory”. 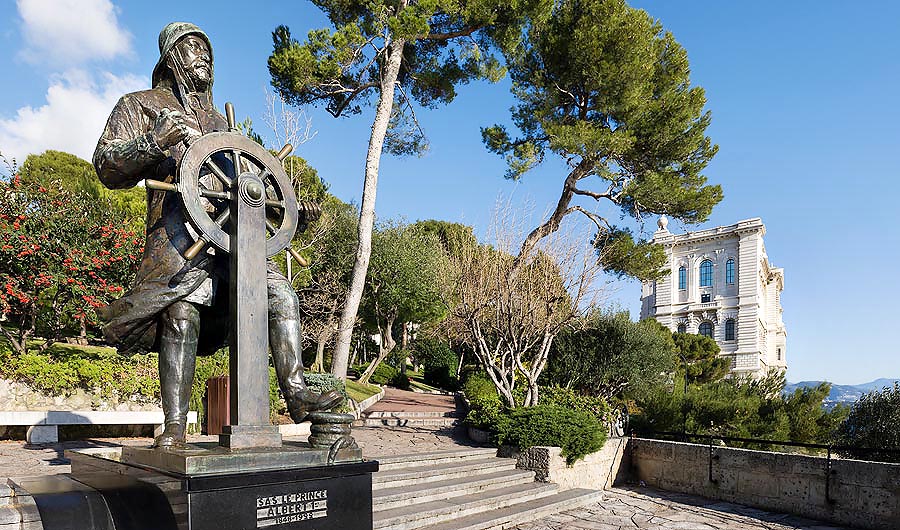 Monaco-Ville: HRH, the Prince Albert I statue, and the Oceanographic Museum

Rightly called “The Temple of the Sea”, the Oceanographic Museum magically unites as one body with the impressive scenery of the Rock of Monaco as seen from the open sea. 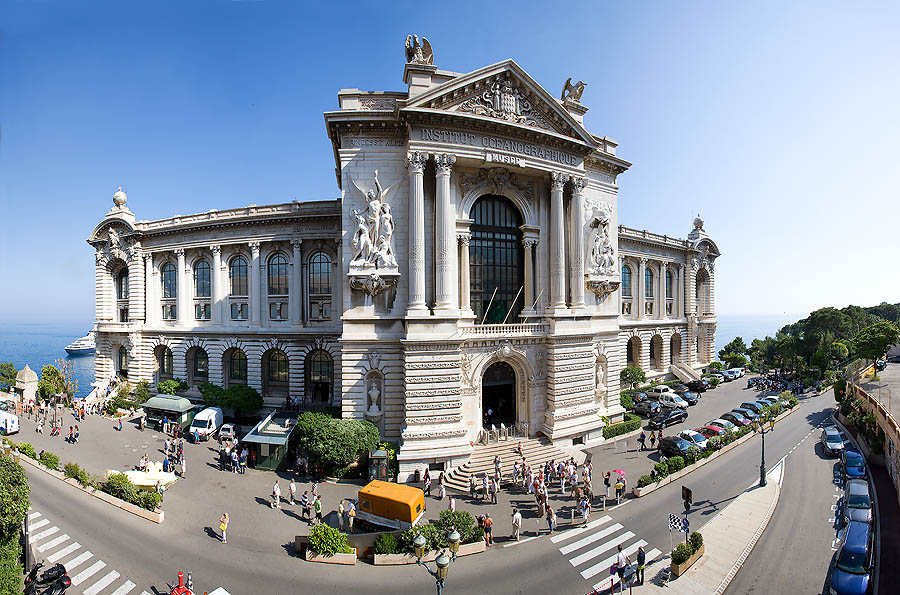 Monaco-Ville: the famous Oceanographic Museum is a neo-classic work of the architect Paul Delefortrie. Built between 1899 and 1910, under the rule of Prince Albert I, it has a monumental façade with great sculptures by Gustave Dussart. 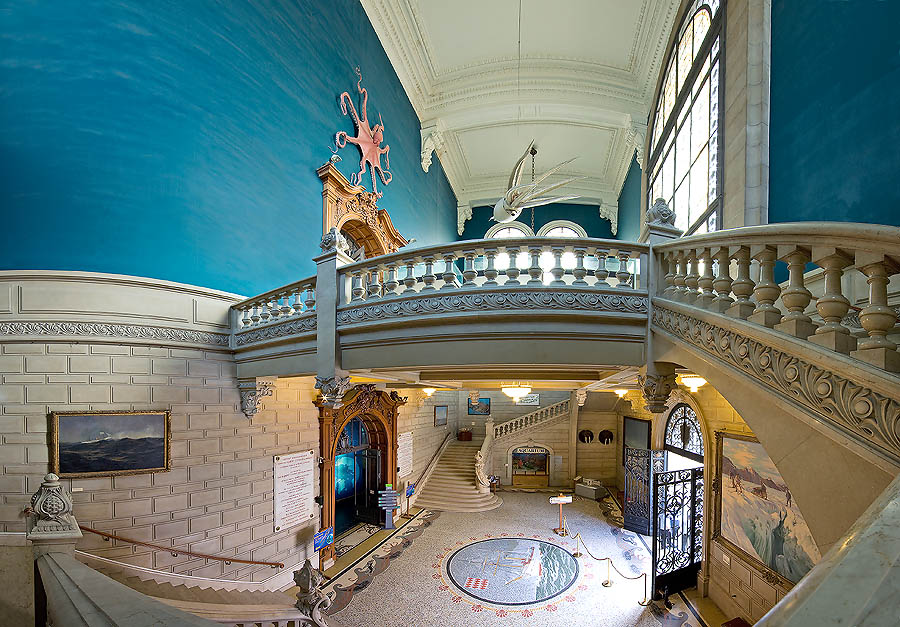 Monaco-Ville: the entrance to the Oceanographic Museum 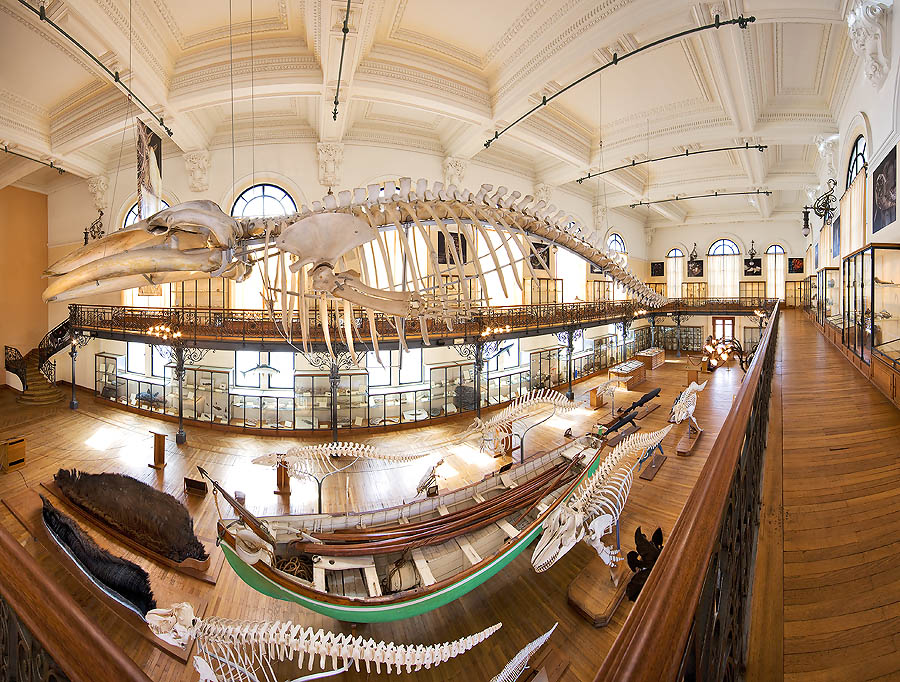 Monaco-Ville: the “hall of the whale” of the Oceanographic Museum with skeletons of Balaenoptera physalus, Pseudorca crassidens, and Orcinus orca. 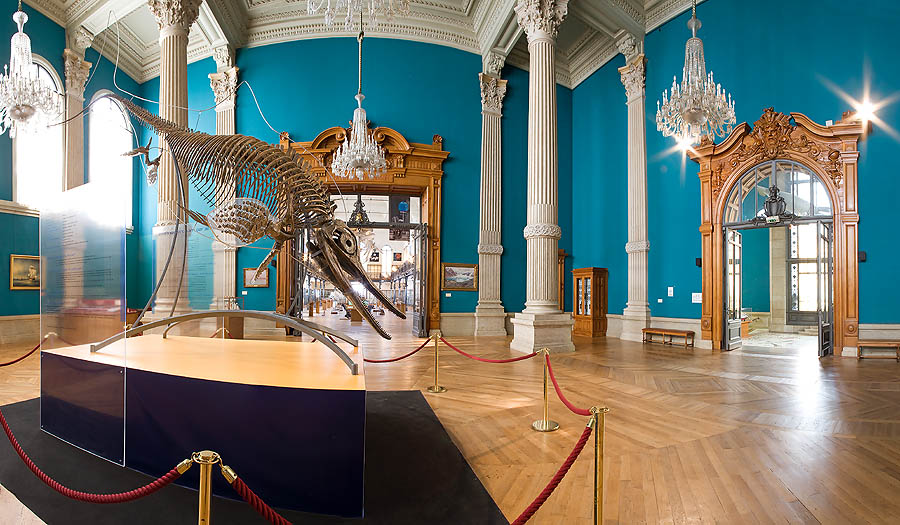 Monaco Oceanographic Museum: exposition of Ophthalmosaurus anna, a fossil of a sea reptile born 150 millions of years ago. Due to its hydrodynamic and morphologic structure, it recalls a dolphin, but it has a vertical fin, like a shark, and a crocodile jaw. 5,40 m long, it weighed 1.000 Kg and had the largest eyes in the animal world. It was hunting the giant cuttlefishes in the great depths. 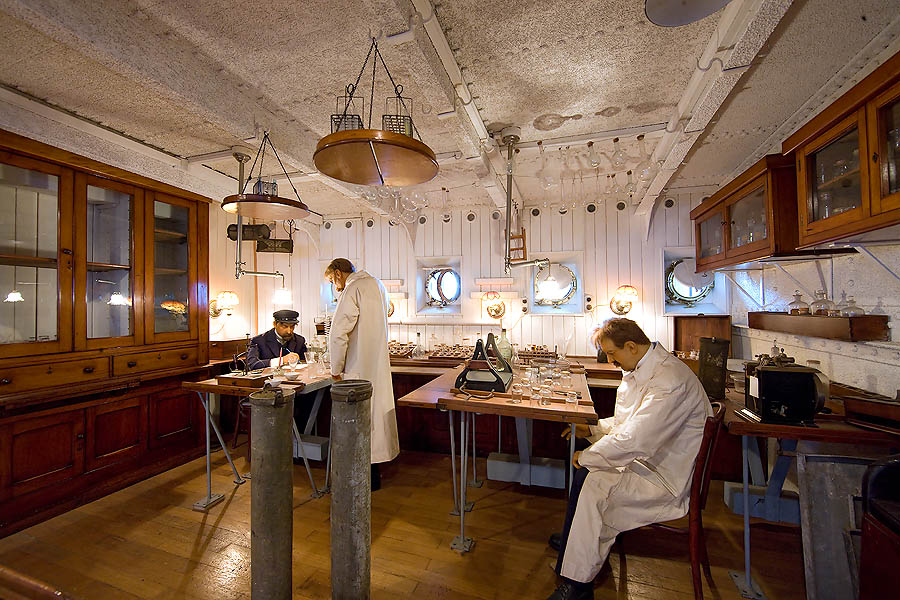 Reconstruction at the Oceanographic Museum in Monaco of the workshop of Prince Albert I vessel, the Hirondelle II 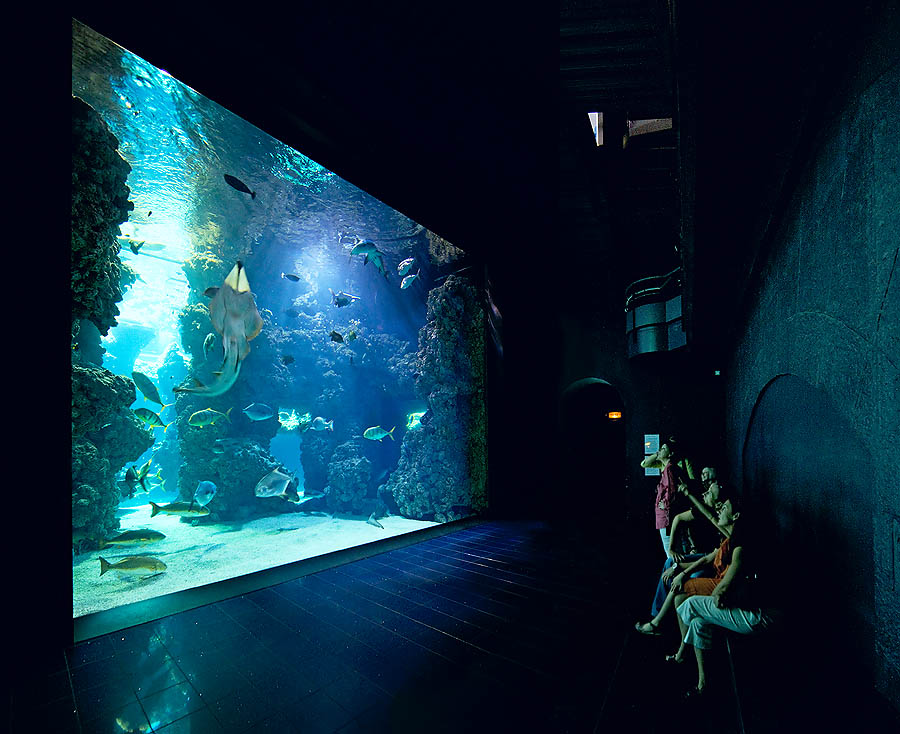 The acquarium of the Monaco Oceanographic Museum holds a 400.000 ltrs pool, 6 mt tall

Other enlargeable panoramic views of the Principality of Monaco

Monaco-Ville and geography – Principality of Monaco was last modified: May 16th, 2022 by Nacho