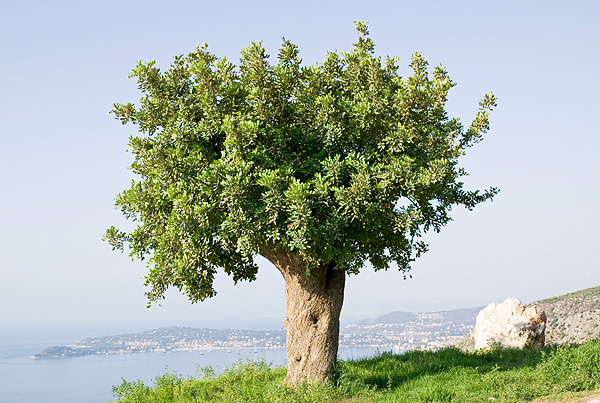 The Carob (Ceratonia siliqua), is the national tree of the Principality of Monaco.

Known also as Bread of St. John the Baptist, Pythagora Bean, or Egypt Fig, it’s a plant which has well adapted to the Mediterranean shrub.

Persistent and tough leaves, thus resisting well to the sun and the drought, 7-10 metres high at the maximum, and a very slow growth, in harmony with the climate and the rocky, difficult soil where it lives.

Sobriety, perseverance and patience. There’s no hurry, seen that a Carob live even 500 years.

Tendentially a dioicus species, it appears with male, female or hermaphrodite specimens.

The flowers, reduced to the minimum, show the signs of an ancient striptease.

During millennia of evolution, they have lost all their petals, opting for an intensely sweetish scent, perceptible metres far away, which irresistibly attracts the bees. What remains of flowers, is today accumulated in bristly bunches. 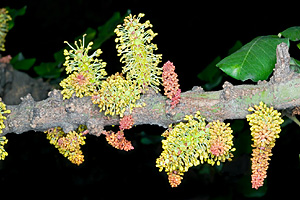 Those of male plants show many small disks imbued of nectar with 5 stamens around; for the ladies, no anthers, but many small parabolic antennas to catch the pollen; and in the plant with uncertain sex, the two structures live together. However things go, the small fecundated flowers leave the room to showy flat siliques long even 15 cm.

Similar to the “flat beans” found at the market, but bigger and more pulpy, in a word, a “maxi pod”, which does justice to a specimen belonging , like the wisteria, the mimosa, the broad beans or the tamarind, to the huge family of → leguminous plants.
At the beginning, these odd, bent fruits, are yellow-greenish, but later, while ripening, the become dark brown. Inside, an edible pulp, fleshy, fat and sweet.
If eaten fresh, it’s quite palatable, but with a mild laxative and diuretic action, whilst after drying shows astringent proprieties. 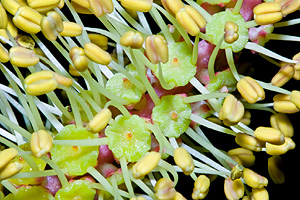 Important component of decoctions, infusions and tasty syrups.
Alcohol can be obtained, through fermentation, whilst the seeds furnish starch and rubbers used in industry.

The production per tree is very important. An adult specimen in good shape furnishes about 1300 kg of fruits each year.

Thus, in the past, the Carobs were dedicated to the feeding of horses and cattle, not to forget the tannery of leathers, seen that tannin can be easily extracted from the bark and the leaves.

And when at the supermarket, or in pharmacy, your read E410 on a label, you can be sure that inside there is some gum extracted from Carob seeds. 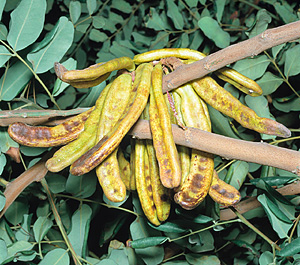 It’s in this way that in the old times the unity of measurement of precious stones was born from the Arabic word “Kerat”, which, rightly, means Carob.

The national flower of the Principality is, on the contrary, a splendid → bellflower : the Campanula medium . Tall even half a metre, with flowers of 3-5 cm, it grows spontaneous on heaps of stones, the landslides and the bushy slopes around Monaco, and, in the hinterland, till 1500 metres of elevation. 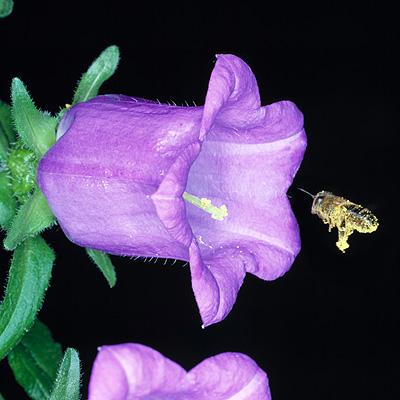 Usually, in nature, it exhibits a blue-violet corolla, but it happens, sometimes, to find discoloured, almost white, specimen.

Lovers of Botany are often confronted with tens of domestic bell flowers, all similar at sight, and not always easy to be classified. 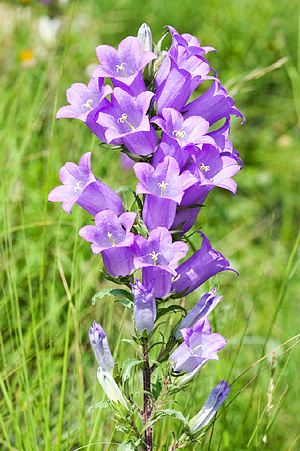 But this one is recognized immediately, because it’s the only one with five stigmas. Five small curls, instead of three, on the top of the female organ of the flower.

A species which attracts the attention, then, but which has been mainly noted by the hot-bed keepers.

As sometimes scientific names do suggest, we might think that the plants of our gardens come from China or South America, or, however, from very far away places. Here, it’s exactly the contrary.

Starting from a domestic species, floriculturists have selected the best species, with more or less open corollas, even obtaining some pink gradations.

The blue-magenta corollas of the wild forms contain in fact a small quantity of red, and if all other pigments are taken off, selecting repeated hybrids with whitish forms, you get an incredible pink colour.

And so, now famous, the Campanula medium has become an ornament of the gardens of the whole world.