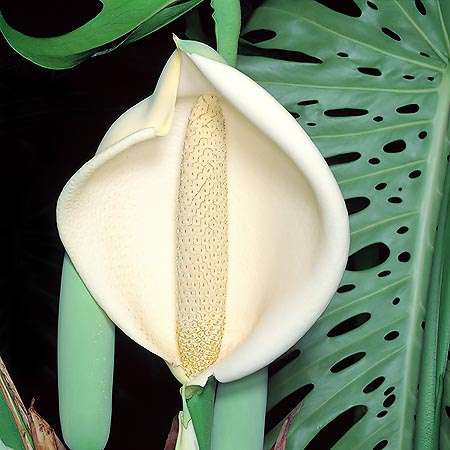 The Monstera deliciosa Liebm. (1849) is native to the humid forests of Mexico (Chiapas, Oaxaca and Vera Cruz), Costa Rica, Guatemala, Nicaragua and Panama.

The name of the genus is of unsure origin, after some it should come from the Latin “monstrum” = wonder, exceptional thing; the Latin name of the species, “deliciosa” = delicious, refers to the taste of the fruit.

Robust, evergreen, hemiepiphytic climber, with stems tending to become semi-woody with the age, with a diameter of 5-7 cm and a length which can be of 20 m and more, with several aerial roots, in particular by the nodes, with which it clings to the trunks of the trees.

The leaves, on 0,7-1 m long petioles, are ovate-cordate, leathery, of an intense glossy green colour and present the phenomenon of the heterophilly (bearing foliage leaves of different forms on the same plant), are about 30 cm long and whole in the young plants, and 60-90 cm long and 60-80 cm broad in the adult ones, deeply cut and irregularly perforated.

The axillar inflorescences are formed by a cream coloured spadix surrounded by a coriaceous cream-white spathe; the small flowers spread on the spadix are protigynous hermaphrodites (the stigma, the female part, is receptive before the ripening of the stamens, thus avoiding the self-fertilization), and the single fruits, separated by thin black membranes, are juicy cream coloured berries, forming a cylindrical composite fruit (syncarp), long 20-25 cm and with a diameter of about 6 cm, covered by hard hexagonal green scales.

The ripening, after 12-14 months from blossoming, goes from the bottom upwards, and is evidenced by the fall of the hexagonal, non edible, scales and by an intense smell; the single fruits, the taste of which recalls the banana and the pineapple, are to be taken off from the spadix and consumed in short time, as they rapidly deteriorate.

The seeds, rarely produced, are green, pear-shaped and have a short lasting germination (a few weeks). It usually reproduces by division, by point cutting, and by portion of stem with at least two nodes, in which case it needs 4-6 years for bearing fruits. 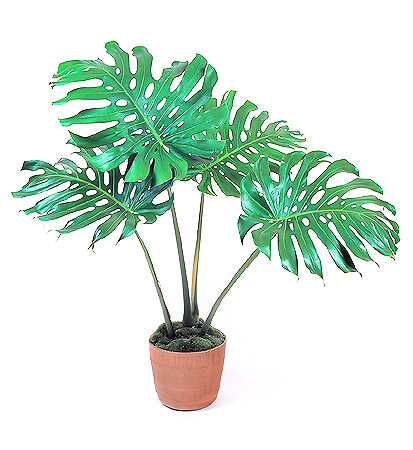 One of the most common indoor plants © Giuseppe Mazza

The plant can be cultivated in open spaces in tropical and humid subtropical regions, where it is utilized, both in shade or in filtered sunlight, to cover the soil, rocks and walls, or left climbing on trees where it adheres with its aerial roots; it can be also cultivated in warm temperate zones, possibly in a sheltered position, as the foliage can get damaged already with temperatures just under the 0°C.

When in pot, it’s, since time, utilized for ample inner spaces decoration, conveniently sustained due to its size, appreciated for the facility of its cultivation, resistance and adaptability to rather dry and shady locations; it is not too demanding about soil, but it is better to employ porous, draining and rich of organic substance substrata.

Watering must be regular in summer, always avoiding water stagnations which can cause rottenness, reduced in winter, but without allowing the substratum to completely dry up.

All the parts of the plant, unripe fruits included, contain toxic substances, in particular calcium oxalate, which can cause even serious reactions; also ripe fruits can reveal to be irritating for particularly sensitive persons.