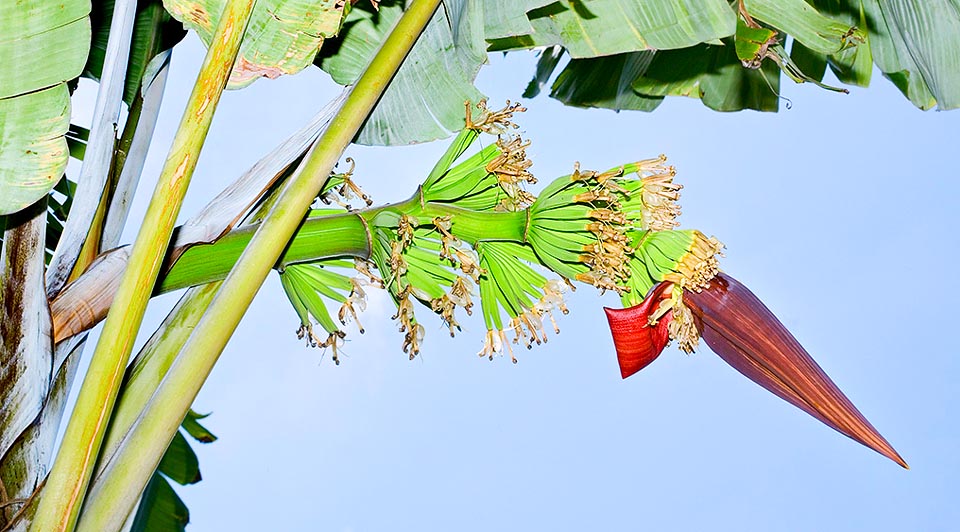 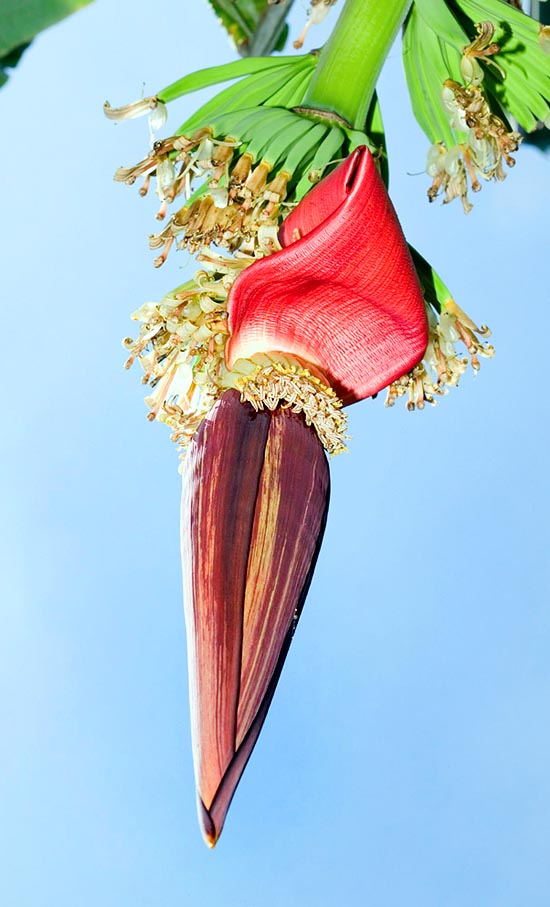 This species is native to Andaman Islands, Borneo, China (Guangxi and Yunnan), India, Java, Malaysia, Myanmar, Philippines, Sri Lanka, Sulawesi, Sumatra, Thailand and Vietnam, where it grows in the humid forests and in the swampy or partly swampy zones, from the sea-level up to about 1200 m of altitude.

After some, the genus was honoured to the Roman physician and botanist Antonius Musa (63 BC – 14 AD), after others, the name comes from the Arabic “mawzah” = banana; the name of the species is the Latin term “acuminata” = acuminate, sharp, with reference to the fruit with its sharp apex.

The Musa acuminata Colla (1820) is a monocotyledon, herbaceous plant, rhizomatous, caespitose, with a short and underground stem and a pseudostem, formed by the foliar bases wrapping strictly one on each other, up to about 4 m of height, of green colour, with wide brown or black spots.

The pseudostem ends in a tuft of oblong leaves, up to 2,3 m long and 50-70 cm broad, of green colour and pruinose on the upper page, yellowish green below, with prominent central venation in the lower page, of yellowish white colour, and thin lateral parallel veins.

The petiole, long up to about 70 cm and covered by a waxy pruinescence, is grooved on the upper side and with the groove margins open.

The inflorescence, on a 30-50 cm long peduncle covered by short and thick hair, is a sub-horizontal terminal spike, long up to about 1,2 m with tubular flowers grouped along the floral axis, with each group covered by a thick lanceolate bract with sharp tip, deciduous, internally yellow at the base, purple at the extremity, externally yellow, red or purple, waxy, bent backward after opening; the scares, trace of the fallen bracts, are prominent.

The flowers at the base are female, united in about 8 groups or more, with even 20 flowers each, about 10 cm long, and placed in two rows, and then there is a zone of hermaphrodite flowers, usually deciduous, with the aborted male and female organs, followed in turn by the male ones, even 20 per bract, placed on two rows, about 6 cm long, of white or cream colour. 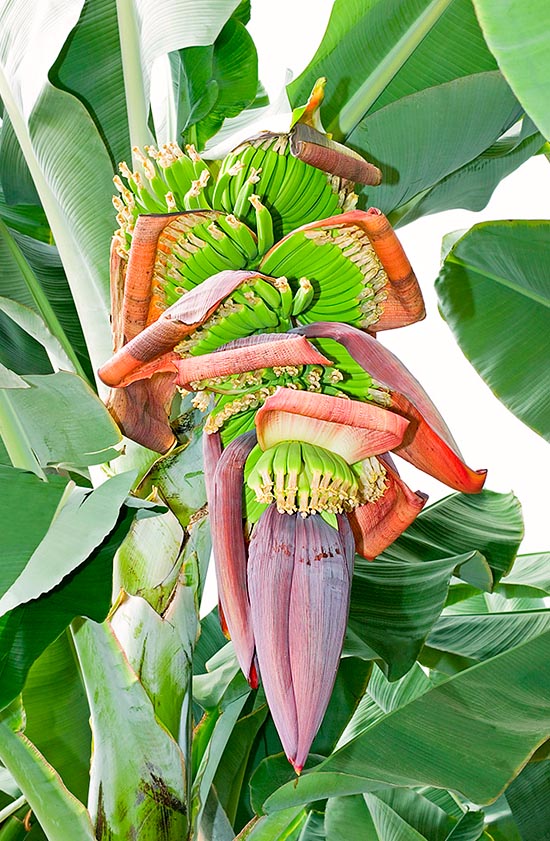 The pollination is done mostly by bats and bees. The fruits, on a short peduncle, are curved cylindrical berries, 10-15 cm long, waxy, green or yellowish green, with thin apex, containing several globose seeds of 5-6 mm of diameter, brown and dipped in a whitish pulp. After blooming, the pseudostem dies, but new suckers continue to generate from the rhizome.

It easily reproduces by division, through suckers equipped with roots, and by seed, in a substratum with 50% of sand or agri-perlite kept humid, which germinates in 2-4 weeks time at the temperature of 22-26 °C and in luminous position. The times may be shortened keeping previously the seeds plunged in water for 3-4 days or scarifying them. The species is diploid (in the somatic cells are present two copies of each chromosome), 2n = 22, and is synthetically indicated with AA, where A is its genotype (genetic makeup); in the wild it has also a high variability. Presently following subspecies are recognized:

The species and the subspecies, whose fruits are considered as not edible due to the presence of the numerous seeds, outside from the origin zones are cultivated in botanical gardens and, in a limited extent, for ornamental purpose, but have a great importance in the studies for the genetic improvement of the varieties with edible fruit, those suitable for the fresh consumption, the classical “bananas” as well as those to be consumed cooked, called “plantain” and “platano” in Central and South America (in Spain and in Mexico, “platano” is utilized for both types). 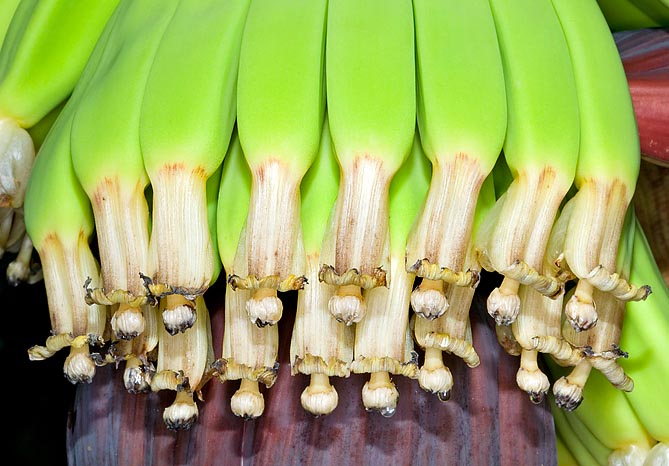 As a matter of fact, species and subspecies are subject to fungal and bacterial diseases, to viruses, insects and nematodes, which have caused in the past very serious damages; the main aim of the researches on the genetic improvement and of the hybridizing programmes is bound to increase the resistance of its varieties and hybrids to diseases and parasites.

In its area of origin are since long time natural diploid forms with seedless fruits having originated from two mutations, the female sterility and the parthenocarpy (production of fruit without pollination and fertilization), with perfumed pulp, soft and sweet for the conversion, when ripe, of the starch into sugars (glucose, fructose and saccharose), suitable therefore for the consumption when fresh, and which have been in the time object of selection and reproduction, of course only in vegetative way. 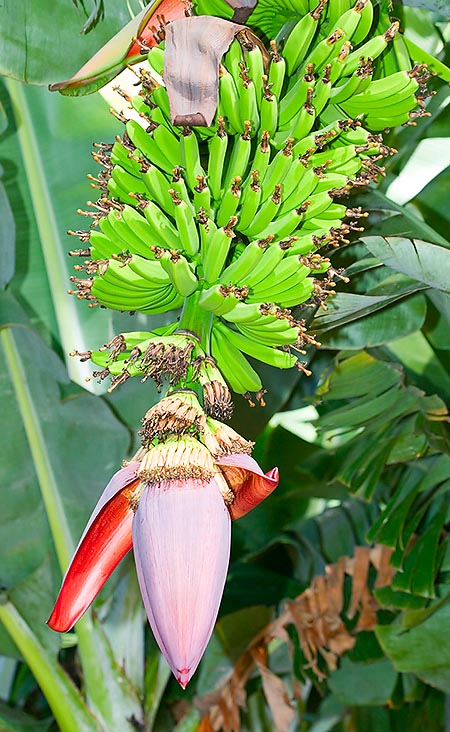 The group 'Cavendish' has seedless and bigger fruits © Giuseppe Mazza

From these ones have originated the triploid forms, AAA, which characterize for a greater robustness of the plants and the greatness of the fruits, to which belong most of the varieties presently cultivated for the fresh consumption, amongst these ones, more than the 90% belong to the sub-group of the Cavendish (‘Antalia’, ‘Dwarf Cavendish’, ‘Figue Rose’, ‘Grande Naine’, ‘Johnson’, ‘Nathan’, ‘Red’, ‘Robusta’, ‘Valery’, ‘Williiams’, etc.).

The variety ‘Dwarf Cavendish’ stands among the most cultivated, the plants are 1,5-2,5 m tall with medium-sized fruits of pale green or yellowish green colour with fine and sweet pulp, easily recognizable because the male flowers and relevant bracts are persistent.

In more recent times, by means of appropriate crossings, they have obtained tetraploid forms, AAAA, to which belong, for instance, the varieties ‘Champa Nasik’ and ‘Golden Beauty’.

In the distant past, there were present already, at the spontaneous state, sterile hybrids with the Musa balbisiana, in the zones where, also due to the man’s intervention, there was an overlapping of the two species, hybrids which had a greater resistance to the diseases, the dryness and to the low temperatures, all characteristics coming from the Musa balbisiana, and, for this reason, they have been at once subject of selection and of reproduction.

To these hybrids (Musa acuminata × Musa balbisiana), botanically denominated Musa × paradisiaca L. (1753), belong most of the varieties nowadays cultivated, with a predominance of those intended for the consumption provided previous cooking.

The hybrids are conventionally designated with the letters symbolizing the genotype (B for the Musa balbisiana), therefore a diploid hybrid with AB, triploid with three letters, AAB and ABB, and tetraploid, AAAB, AABB, ABBB.

Where the genetic makeup of the acuminata (A) prevails, the fruits are usually suitable for the fresh consumption, where that one of the balbisiana (B), is prevalent, they are suitable for the consumption if cooked, due to the presence of the starch which only minimally transforms in sugars when ripe.

The triploid varieties are the majority also in the hybrids field, among these, for instance, ‘Mysore’, ‘Prata Ana’, ‘Pisang Raja’ and ‘Silk’ (AAB) are suitable to the fresh consumption, whilst ‘Bluggoe’ and ‘Topocho Verde’ (ABB) to the cooked one; among the tetraploid, in the first group we have ‘Goldfinger’ (AAAB), whilst in the second, we have ‘Pacovan Ken’ and ‘Tiparot’ (ABBB). 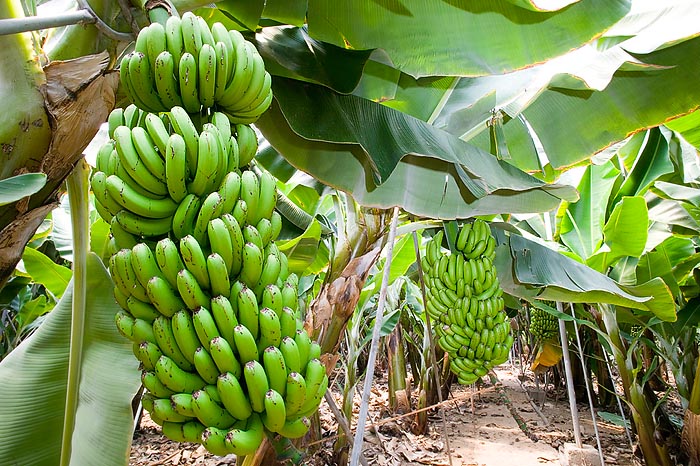 Banana plantation. Bunches are picked up green and yellow only after, while ripening © Giuseppe Mazza

The reproduction of the sterile varieties of Musa acuminata and of its hybrids happens of course only by division or, better, by suckers provided with root, of which two types do exist, those with an initially wide leaf, coming out from the superficial buds of the rhizome, and those with initially lanceolate leaf from the deepest buds; for the reproduc- tion, those with lanceolate leaf are preferred due to their greater vigour.

Industrially, they make an in creasing use of the micropropagation, which is able to furnish plants with uniform characte- ristics and free from viruses and others diseases.

The species and varieties where only the genotype A is present, or prevails, are cultivable in the tropical and subtropical zones in full sun on loose, fertile, draining, sub-acidic or neutral, rich of potassium and magnesium soils, periodically fertilized and with regular and abundant supply of water, as they are much sensitive to the water deficits, therefore, where the rains are not sufficient, irrigations must be effected. 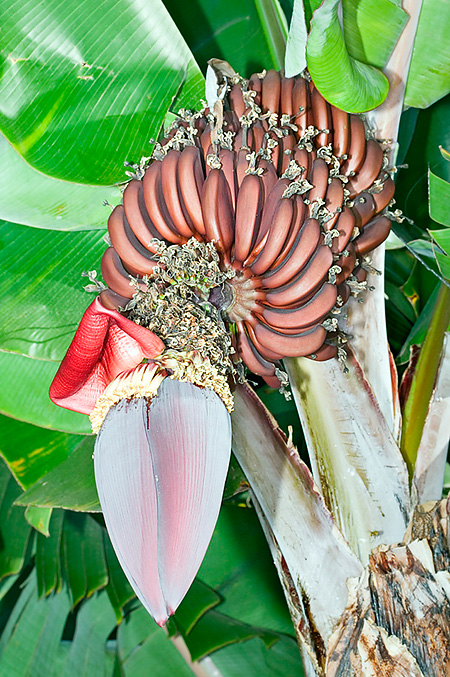 Pink varieties such as the 'Figue Rose' do exist © Giuseppe Mazza

For what the temperatures are concerned, the best ones for the growth stand between 26 and 30 °C, temperatures below 20 °C cause a slowdown of the growth, temperatures around the 15 °C, are supported for a short time, but in the long term they may cause deformations in the emerging inflorescence, between the 10 and 12 °C the plants stop to vegetate, by the 5 °C irreversible damages may occur and finally a prolonged period around the 0 °C, or little less, is usually fatal.

For what the high temperatures are concerned, the stoppage of the vegetation takes place starting from the 38 °C, whilst the leaves are destroyed by around the 47 °C.

The hybrids where the genotype B prevails have a better resistance to the low temperatures, to insufficient or irregular water input, thus being more suitable to monsoon climates, and have a greater tolerance in respect to the characteristics of the soil.

The plants, due to the vast foliar surface, are very much sensitive to the wind, which damages the leaves and may even break the pseudostems or root out the whole plant.

The growing times vary depending on the tropical or subtropical climate, the variety and the cultivation conditions, from 6 to 12 months till the emergency of the inflorescences and 3-10 months from this one to the harvesting.

Among the interventions to be done in cultivation, it is necessary the removal of the suckers, continuously produced, in order to avoid that they compete with the mother plant, leaving only those needed for ensuring the continuity of the production, the cutting of the male part of the inflorescence is useful for conveying all the resources of the plant into the formation of the fruits.

The fruits, notoriously perishable, destined to the exportation, in the overwhelming majority varieties belonging to the group Cavendish, are harvested when they have reached a level of maturity of the 75%, after having been carefully washed up, in order to remove residues of pesticides, insects and other foreign materials, and a treatment for minimizing fungal attacks, are despatched to their destination place where they are treated with ethylene, for getting a uniform ripeness, before being sold.