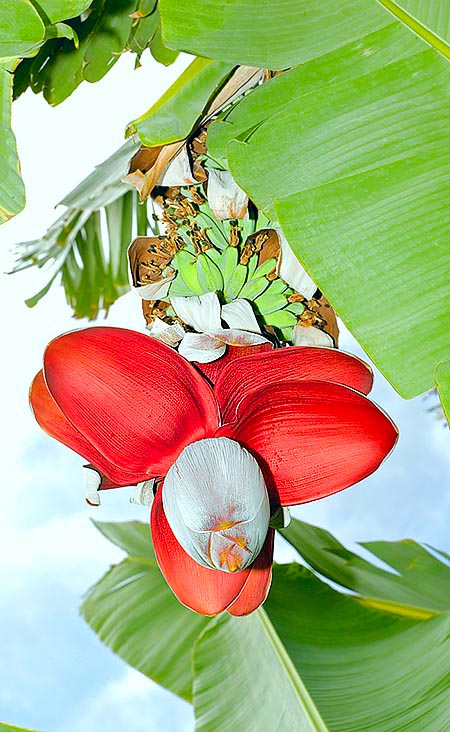 The exact area of origin is unknown; it is thought to be China (Guangdong, Guangxi and Yunnan), India, Indonesia, Malaysia, Myanmar, Nepal, Papua New Guinea, Philippines, Sri Lanka and Thailand, where it grows in the tropical forests up to about 1000 m of altitude in mainly monsoon climate.

The Musa balbisiana Colla (1820) is a monocotyledonous, rhizomatous, caespitose, herbaceous plant, with short and underground stem and a pseudo-stem, formed by the foliar bases strictly wrapping each other, up to about 5 m of height and 30 cm of diameter at the base, of greenish yellow colour with possible thin blackish dots.

The pseudo-stem ends in a tuft of oblong-ovate leaves, up to 3 m long and 70 cm, or more, broad, of green colour, at times slightly pruinose on the upper page, with prominent central venation in the lower page and thin parallel lateral veins; the petiole, even about 70 cm long, is grooved on the top with the groove’s margins closed.

The inflorescence, on a glabrous, 30-60 cm long, peduncle, is a pendulous terminal spike, even more than 2 m long, with tubular flowers united in groups along the floral axis, with each group covered by a thick ovate bract with obtuse apex, uniformly of bright purple red colour on the inner surface, purple brown and pruinose on the outer one, which does not bend backward after opening.

The bracts of the female flowers are deciduous, those of the male flowers are persistent; the scars, mark of the fallen bracts, are not prominent. The flowers at the base are female, united in about 8 groups of even 16 flowers each, placed in two rows, then follows a zone of hermaphrodite flowers, usually deciduous, with aborted male and female organs, followed in turn by the male ones, up to 20 per bract, placed in two rows, of a cream colour suffused with pink. The pollination is mainly done by bats, nectariniids and bees. The fruits, on a 1-2 cm long peduncle, are angular ovoid berries, 13 x 4 cm, waxy, of green grey colour tending at times to the yellowish when fully ripe, containing several globose seeds, of 4-8 mm of diameter, of brown colour, dipped in a whitish pulp rich in starch. After the flowering, the pseudo-stem dies, but from the rhizome continue to produce new suckers. It easily reproduces by means of suckers equipped with roots, by division and by seed, in a substratum with 50% of sand or agri-perlite kept humid, which germinates in 2-6 weeks at the temperature of 22-26 °C and in full light; the times may be reduced by previously keeping the seeds in water for 3-4 days or by scarifying them.

The Musa balbisiana is diploid (in the somatic cells are present two copies of each type of chromosome), 2n = 22, and is synthetically indicated with BB, where B is its genotype (genetic constitution). 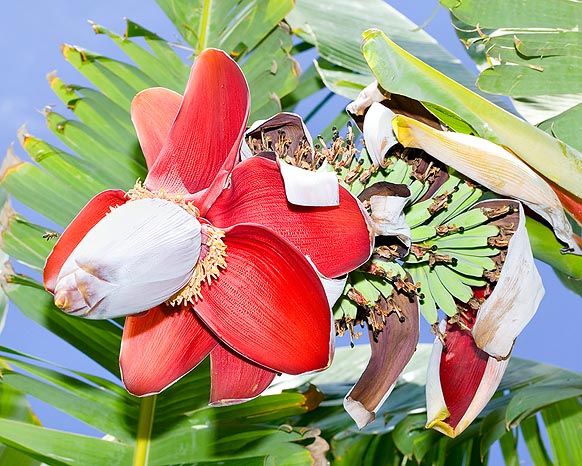 Bracts are red, and fruits, full of seeds, are not deemed edible © Giuseppe Mazza

The species, whose fruits are deemed as not edible due to the presence of the numerous seeds, outside from its origin zones is cultivated in botanic gardens and, in a limited extent, as ornamental due to the big leaves and the coloured inflorescences, but it holds a great importance in the studies for the genetic improvement of the edible bananas being, as known, one of the progenitors (the other being the Musa acuminata) from which many descend.

In the hybrids between the two species (Musa acuminata × Musa balbisiana), botanically denominated Musa × paradisiaca L. (1753), already present in the wild state in remote times, the species confers some of its characteristics, in particular a greater resistance to dryness, sicknesses and to low temperatures.

The hybrids are conventionally designated with the letters which symbolize the genotype (A for the Musa acuminata), therefore a diploid hybrid with AB, a triploid one with three letters, AAB and ABB, and tetraploid, AAAB, AABB, ABBB.

Where prevails the genetic constitution of the acuminata (A), usually the fruits are suitable for the raw consumption, where prevails that of the balbisiana (B), to the consumption previous cooking, due to the presence of the starch which transforms in sugars only in a very small extent when ripe; the first ones are the classical “bananas”, the second ones are called “plantains” and “platanos” in Central and South America (in Spain and in Mexico, the term “platano” is utilized for the two types). Among the diploid varieties, ‘Ney Poovan’ (AB) is suitable for the consumption as fresh, as well as the triploid ‘Lady Finger’ (AAB), whilst are to be consumed cooked the triploid ‘Horn Plantain’ (AAB) and ‘Bluggoe’ and ‘Topocho Verde’ (ABB) as well as the tetraploid ‘Klue Teparod’ and ‘Tiparot’ (ABBB).

Finally, there have been selected also diploid forms, BB, and triploid, BBB, sterile, suitable, of course, to the consumption only if cooked; among these ones the most cultivated is the variety ‘Saba’. 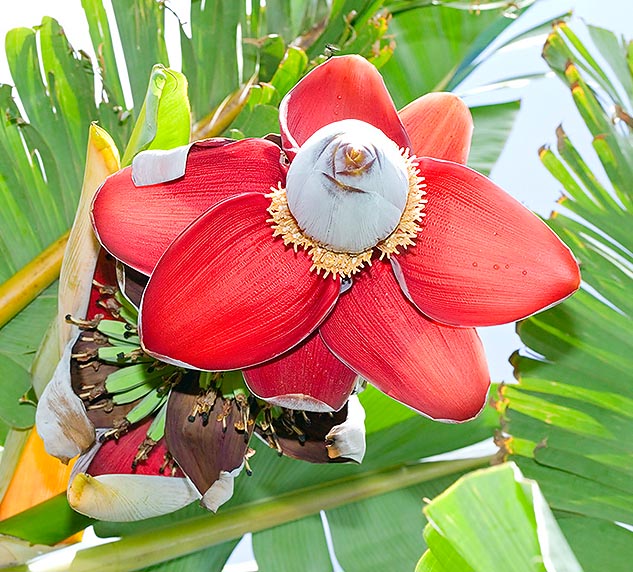 Flowers are on several rows. Hybridized with Musa acuminata has generated the edible bananas © G. Mazza

In industry, the micro-propagation is increasingly common, as this is able to furnish plants with uniform characteristics and free from viruses and other sicknesses.

The species is cultivable in the tropical and subtropical zones in full sun on fertile soils, draining, sub-acidic or neutral, rich in potassium and magnesium, periodically fertilized, with abundance of water for better growing, even if it is able to stand periods of dryness, as those taking place in the monsoon climates, even if with slowdown of the vegetation, characteristic which is conferred also to its hybrids.

The cultivation in the warm temperate zones may be tried, with lengthening of the growth times; concerning the behaviour at low temperatures, the vegetation stops at around the 10 °C, the leaves are destroyed around the -2 °C and all the aerial part at about -4 °C, but revegetating from the rhizome in spring.

The plants, due to the vast foliar surface, are much sensitive to the wind, which causes damage to the leaves and may be capable to break the pseudo-stems or to root out the whole plant.

The growth times vary depending on the climate, tropical or subtropical, the variety and the cultivation conditions, from 6 to 12 months till the emerging of the inflorescence, and 3-10 months from this one to the harvest. Among the interventions to be done in the cultivation of the varieties and the hybrids, stands the removal of the suckers, continuously produced, in order to avoid that they get into competition with the mother plant, leaving only those which are useful for the continuity of the production; useful is the cutting of the male part of the inflorescence thus conveying all the resources of the plant into the formation of the fruits.

The fruits of the sterile varieties and of the hybrids where prevails its genetic constitution (B), intended therefore for the consumption as cooked, are commercialized almost exclusively at local level, as a matter of fact, only the 15% of the whole world production (2010) of all varieties and hybrids is meant for the exportation, formed almost exclusively by varieties intended to the fresh consumption belonging to the group Cavendish of the Musa acuminata.  In addition to the fruits, in some places the consume cooked also the male inflorescences, as vegetable, and the leaves are utilized as fodder for livestock; in southern Japan, the fibres obtained from the pseudo-stem are variously employed.