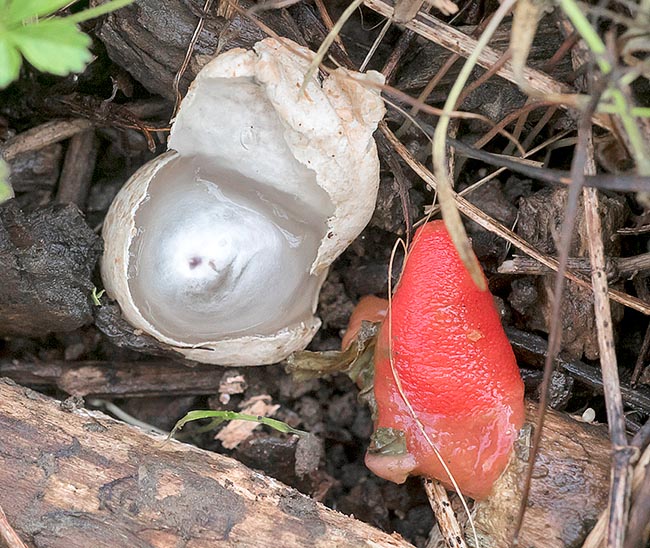 Description of the family: the family of the Phallaceae includes fungi that characterize for having their development inside a casing having a globular form called “peridium”, made by two layers (endoperidium and exoperidium) that enclose the gleba, defined as the fertile component in charge of the formation of the spores.

The carpophores develop in the first phase inside the peridium then, taking off the membrane, in the phase close to the maturation of the spores. This genesis, defines a development of emiangiocarpic type.

The hymenium is formed by sporangia called basidia, from the Greek “bàsis” (base), with usually unicellular structure club-shaped, with on the top small appendages calld sterigmata, that support the spores during their evolutionary cycle, up to the maturation and subsequent separation.

Description of the genus: the genus gets its name from the Latin divinity Mutinus Titinus: a phallic marriage deity that until the first century before Christ helped the young Latin wives to have sex with their husbands. To the genus Mutinus belong fungi that are born under ground shaped like a whitish gelatinous egg 2-4 cm tall and 1-2 cm broad, that, after the breakage of the peridium, develop in a spongy and hollow cylindrical body (receptacle). 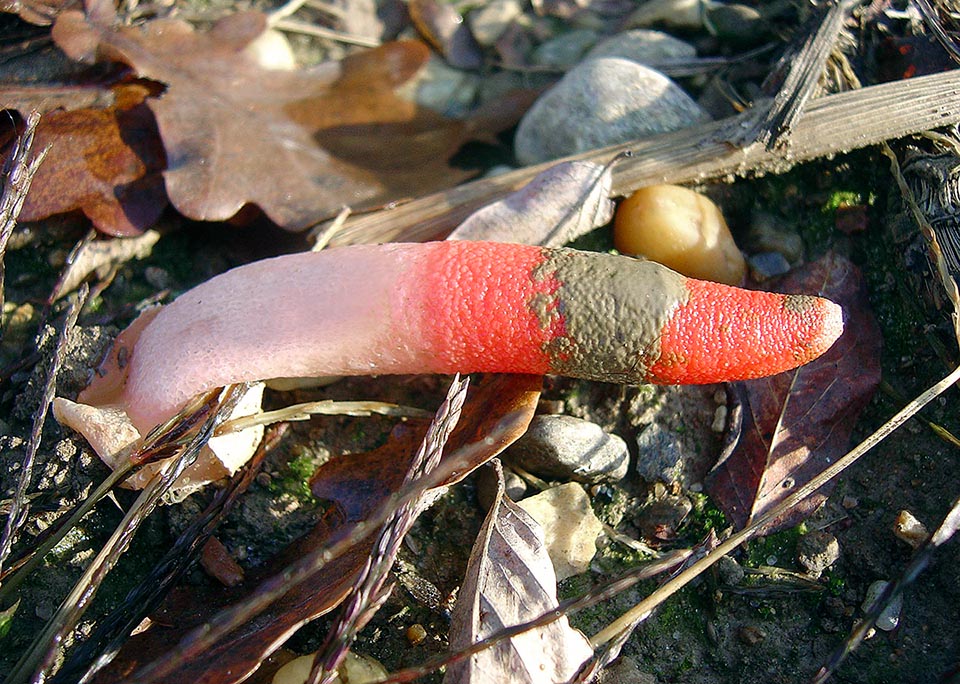 The cap is conical, bright red, differing from the stipe only at chromatic level. It emerges from a sort of volva, residue of the peridium © Gianfranco Colombo

Description of the species: to describe the Mutinus elegans commonly known as Devil’s dipstick, with scientific name coming from “mutinus” (the above cited deity), following the traditional examination criteria of the morphological components is not easy, because the carpophores they produce do not have the classical shape with defined and differentiated stipe and cap, but in spite of this we shall say:

Cap: is identifiable in the upper extremity of the stipe, of conical shape almost pointed holed at the apex, of bright red colour, not differentiated in respect to the stipe, if not on a chromatic level.

Hymenophore: it presents as a greenish mucilaginous layer (gleba), wholly covering the cap. 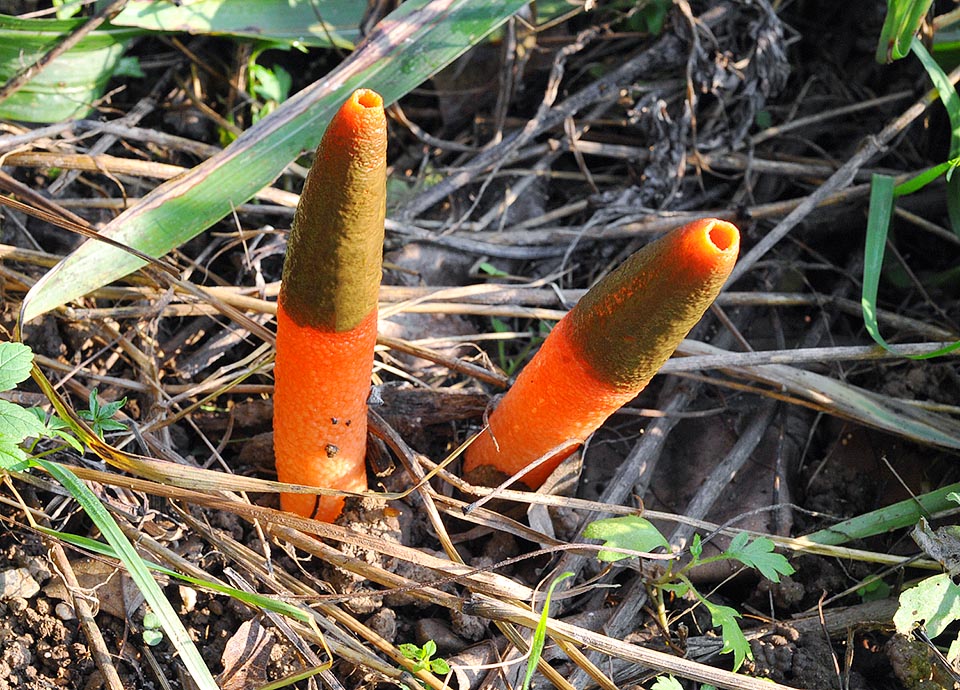 The hymenophore is a greenish mucillagineous layer. Contains the spore, entrusted to flies and other necrophagous insects attracted by a strong smell of rotting meat © Gianfranco Colombo

Stipe: is formed by a slightly elongated cylindrical body, that from the red colour, fades in pink towards the base, that presents a sort of volva, residue of the torn off peridium, from which depart very developped mycelial cords (rhizomorphs), pseudo roots formed by a very thick weaving of mycelial hyphae. The carpophore so defined, has averagely the size of 8-12 cm in height, of which the cap represents about 1/3, with 1-2 cm of diameter.

Smelling: it has a strong cadaverous smell, to attract the flesh flies or other necrophagous insects that landing on the sticky fertile gleba, containing the spores, take away the whole surface, becoming in this way carriers for the propagation of the spores themselves. 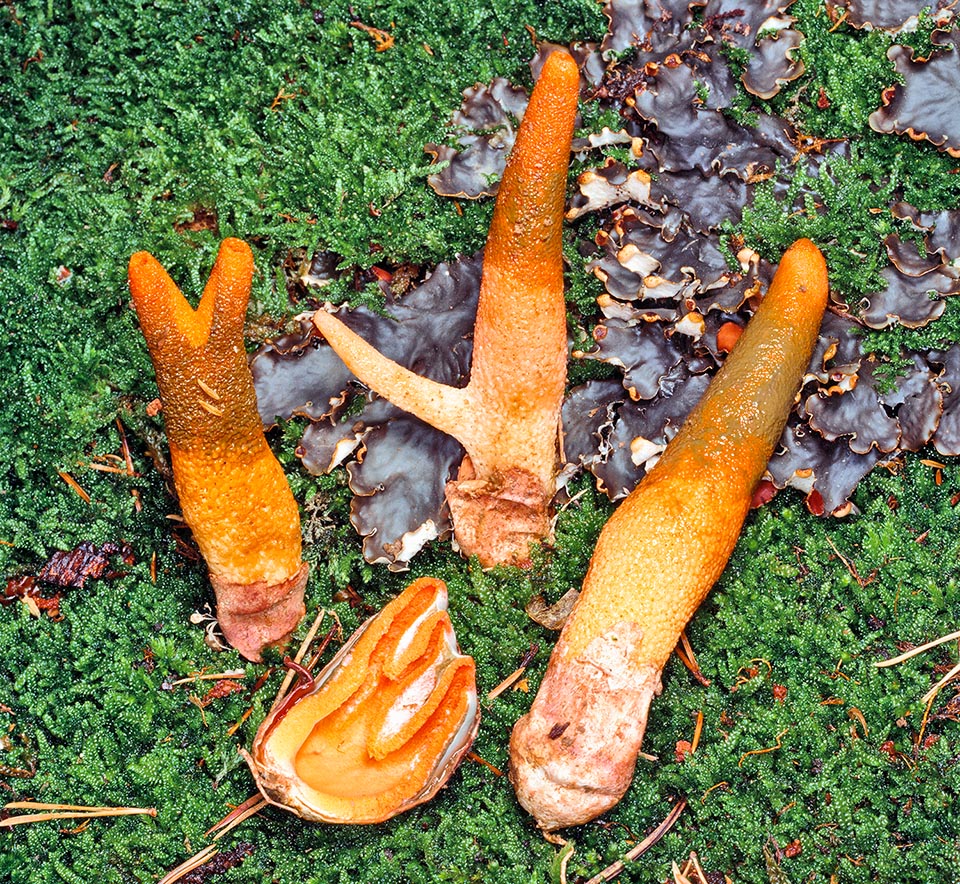 A normal specimen (right) and others with the stipe ramified like a “deer’s antler”. This curious phenomenon, already well visible during the phase of primordium in the bottom left section, is a rather frequent anomaly that has earned this species even the no less imaginative common name of “Headless stinkhorn” © Giuseppe Mazza

Habitat: saprobic fungus from the Greek “sapròs” (rotten) and “phytòn” (plant), it nourishes consequently of dead or decomposing organic substance growing in the woods or in the grassy clearings from spring to autumn, on vegetable organic residues. Present in Europe and in Japan, but also in North America where it has been discovered in 1679 by the English missionary John Banister.

Microscopy: yellowish spores, ellipsoidal, bi-guttulate (they contain two tiny oily drops in their interior) 4-6 x 2-3 µm, present a hilar scar at one tip (diameter of 0,2-0,3 μm ), a sort of incision most probably formed during the detaching of the spore from the sterigma.

Remarks: laboratory tests have shown that this fungus holds antibiotic properties against some bacteria and fungi particularly aggressive for the man: such as: Bacillus cereus, Bacillus subtilis, Staphilococcus aereus, Escherichia coli, Salmonella typhimurium and the yeast Candida albicans.