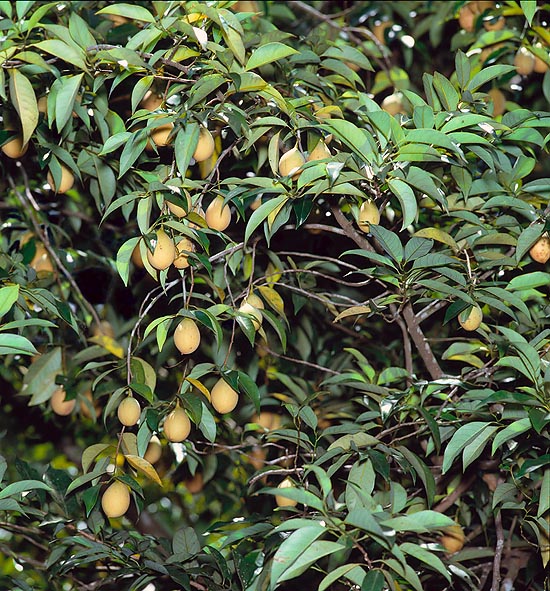 The place of origin is unsure; probably it’s the Moluccas (Indonesia).

The name of the genus comes from the Greek “myristicόs” = odorous; the name of the species is the Latin term “fragrans” = fragrant, perfumed, with obvious reference.

The Myristica fragrans Houtt. (1774) is an evergreen, dioecious (each individual carries only male or female flowers), tree, with blackish grey bark, longitudinally fissured, up to about 18 m tall, even if, in cultivation, it rarely exceeds the 10 m, with thick crown and thin branches.

The leaves, on short petiole, are simple with entire margin, alternate, of almost elliptic shape with sharp apex, 4-15 cm long and 2-6 cm broad, of an intense bright green colour on the upper page, paler below, rather coriaceous and aromatic.

The female inflorescences are axillary cymes carrying few (1-3) cream yellow perfumed flowers with fleshy corolla, of about 7 mm of diameter and 12 mm of length, urn-shaped with 3-4 lobes.

The male inflorescences are compound racemes carrying from 4 to 15 flowers, they too perfumed and of cream white colour, with similarly shaped corolla, but smaller, 5-8 mm long and with a diameter of 3-5 mm.

The fruits, which ripe in 8-9 months, are fleshy, oval drupes, piriform or subglobose, 5-8 cm long, of yellow or orange colour, which open spontaneously in two halves when ripe exposing the ellipsoidal seed, 1-4 cm long and 0,5-2 cm of diameter, blackish and glossy. 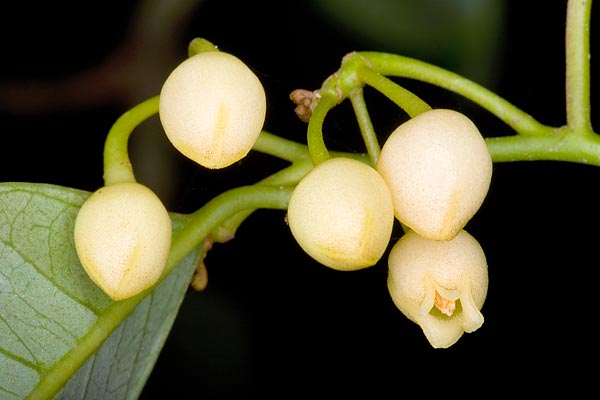 The seed is irregularly covered by a reticulum of fleshy tissue of bright red colour (aril).

It reproduces by seed which is to be planted in a sandy soil as soon as possible, as the germination capability is very short-lasting; the seeds germinate between 4 and 10 weeks and the first blooming happens between the sixth and the tenth year of age.

In order to be sure to keep in the plantations the best ratio between male and female plants, between one to ten and one to twenty, it is necessary to proceed to the vegetative reproduction, by cutting, air layering or grafting, but it is increasingly frequent the recourse to the micropropagation.

It is a species cultivable in the warm and humid tropical climate zones, with abundant rainfall, around the 2000 mm per year, distributed almost uniformly, on fertile soils, draining, in case even sandy, as it does not bear the dry periods as well as the water stagnations; for what the temperatures are concerned, it may resist to exceptional, and very short-lasting, temperatures in the order of the 0 °C.

It prefers a slight shade, especially when young; it is therefore cultivated in association with other trees, like, for instance, the Canarium indicum, or palms, in particular, Cocos nucifera and Areca catechu. 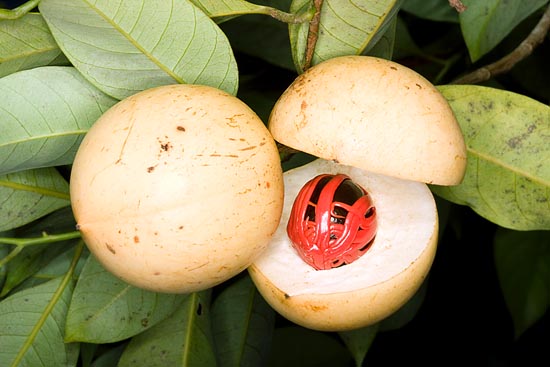 The plant supplies two types of spices of high commercial value, one called “macis”, “mace”, or “nutmeg flower”, that is the dried aril, entire or ground, the other is the dried seed, also entire or pulverized, commonly called “nutmeg”. The main producers are Indonesia, Malaysia, in particular Penang Island, and the Caribbean island of Grenada.

The seed is extracted from the pulp as soon as the fruit opens spontaneously, then the aril, the macis, is detached from the surface of the seed, washed, smoothed and dried in the sun for 1-2 weeks, or, better, in warm air ovens, till when it does become fragile.

The seed is also dried up in the sun, or artificially during the rain season, for 3-6 weeks, then the hard outer surface is mechanically broken for taking off the endosperm, the “nutmeg”, which is further dried up. This one has a surface irregularly grooved by thin depressions and before being commercialized whole is at times covered by a thin layer of lime for protecting it from the parasites.

Macis and nutmeg are much similar as constituents, but the first one has milder smell and taste, and therefore is more prized, and are utilized for aromatizing pastries, drinks, sauces and dishes in general; they are to be employed in small quantities due to the presence of two toxic substances, the myristicin and the elemecin. 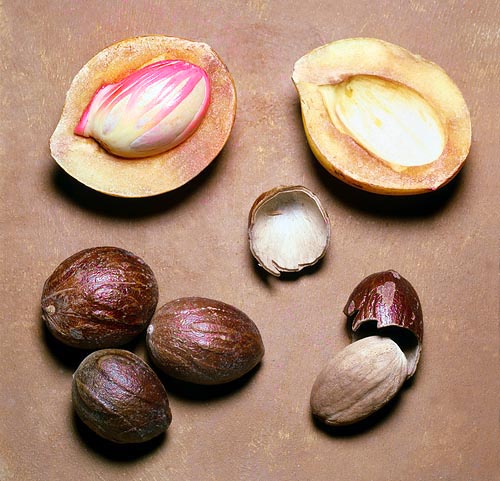 The seed contains the 25-40% of non volatile oil, solid at ambient temperature, yellow or reddish yellow, known as nutmeg butter, which is obtained by warm pressure, and the 5-15% of essential oil, extracted by steam distillation, which is colourless or light yellow with the same smell and taste as the nutmeg and which contains, among the other components, eugenol, widely used in dentistry as antibacterial of the oral cavity.

The macis contains the 4-16% of essential oil similar to that of the nut.

The oil is utilized in the food industry for aromatizing foods and drinks, in the cosmetics industry, and, in a lesser extent, in the pharmaceutical one.

Also the oil is to be cautiously employed due to the presence of myristicin and elemecin.

The pulp of the fruit is locally consumed candied or is employed for preparing preserves.

The nutmeg is used, since the remote times, in the popular medicine as anti-inflammatory, astringent, carminative, stimulant of the circulatory system and as aphrodisiac, but its utilization is increasingly not recommended because of the collateral effects caused by the aforementioned toxic substances.

→ To appreciate the biodiversity within MYRISTICACEAE family and find other species, please click here.