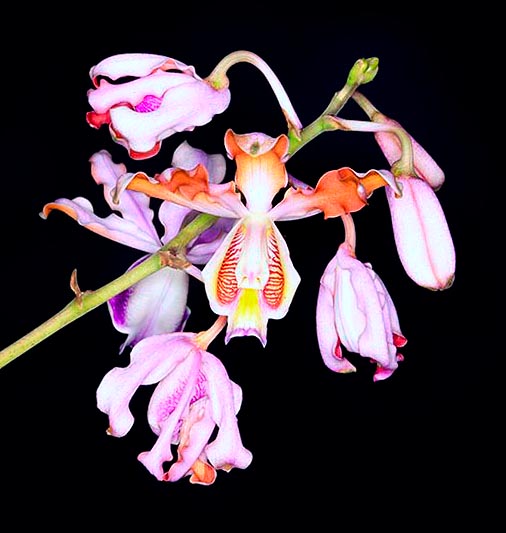 The Myrmecophila tibicinis is quite rare in cultivation © Giuseppe Mazza

The species is native to Belize, Costa Rica, Guatemala, Honduras, Mexico, Nicaragua and Venezuela, where it grows, mainly along the coasts, in the deciduous forests at low altitudes, in zones characterized by seasonal climate.

The Myrmecophila tibicinis (Bateman ex Lindl.) Rolfe (1917) is an epiphytic, at times lithophytic, with robust fusiform pseudobulbs, rather enlarged at the base and tapered towards the apex, grooved longitudinally, hollow with a small opening at the base, often plagued by the ants, 30-45 cm long, provided at the apex with 3-4 persistent leaves, ovate-elliptic, coriaceous, 10-30 cm long and 3-7 cm broad.

Terminal paniculate inflorescence, erect, on purple, 1 to 4 m long peduncle, carrying on the top numerous flowers of 8-9 cm of diameter, close each other, opening in succession in groups of 3-5 with progressive elongation of the inflorescence; the flowers emit a slight scent. The sepals are oblong, of reddish purple colour, 4-4,5 cm long and about 1,2 cm broad, waved at the margins, petals having the same colour, oblanceolate with waved margins, about 4,5 cm long and 1 cm broad; the labellum is trilobed, 4,5-5 cm long and 4,5 cm broad, with the lateral lobes curved upwards around the column, whitish, having thick, purple red venations, and median lobe with a yellow spot at the base and flabellate magenta apex; the column is arcuate, whitish and 3 cm long.

It reproduces by seed, in vitro, by micropropagation and by division, with each section provided with at least 3-4 pseudobulbs; the section may take some years before flowering.

It is one of the most spectacular orchids, rather rare in cultivation; it is thought, in fact, that many plants commercialized under this name are actually other quite similar species not easy to distinguish, in particular, the Myrmecophila christinae and Myrmecophila grandiflora.

In the tropical and subtropical climate zones, where it is possible to cultivate it in open spaces, it is to be placed in full sun for the best growth and flowering, elsewhere, it is fairly difficult to accommodate it in a normal greenhouse, due to the dimensions the floral scape may reach. It requires medium-high temperatures, with winter lowest ones not under the 15 °C, even if it can stand, for a short period and if dry, some degree less, high humidity, 70-80% and constant good ventilation.
The waterings must be abundant and regular all over the vegetative period, reduced when the growth of the pseudobulbs is completed. For the waterings and the nebulisations it is to be utilized rainwater, or water obtained through reverse osmosis or demineralised; the fertilizations, duly distributed in function to the vegetative status of the plant and alternate, in way to avoid salts accumulation at the roots, are to be done preferably with hydrosoluble balanced products, with microelements, at half dosage than what suggested on the package.

It can be mounted on bark, trunks, cork or arborescent ferns roots rafts of the right size in way to accommodate and allow the plant to expand freely as long as possible, being particularly sensitive to the transplants, or placed in capacious pots or baskets with much draining and aerated compost, which may be formed by medium-sliced bark fragments with possible addition of inerts for improving the drainage.