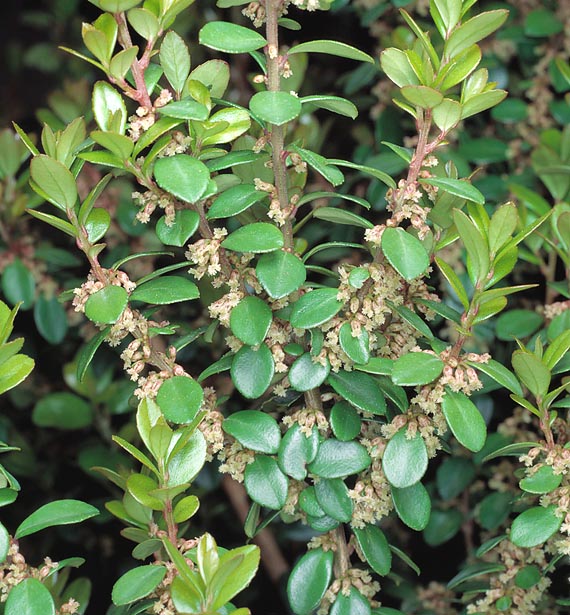 This plant is native to Africa (Azores, Angola, Ethiopia, Kenya, Malawi, Mozambique, Namibia, Somalia, Tanzania, Zambia and Zimbabwe), Asia (Afghanistan, China, India, Pakistan and Yemen), where it grows in the forests as well as on open arid and sunny slopes.

The name of the genus comes from the Greek term “myrsine” with which the common myrtle (Myrtus communis L.) was indicated; the Latin name of the species “africana” = African, refers to one of its places of origin.

The Myrsine africana L. (1753) is a dioecious (each individual carries either male flowers or female ones only), evergreen, much ramified and compact, shrub, up to about 1,5 m tall, with thin ascending branches, greyish, tomentose in the apical part, marked by the scars of the fallen leaves.

The leaves are simple, alternate, almost sessile (without petiole), from obovate to lanceolate, 0,6-1,5 cm long and 0,4-1 cm broad, coriaceous, with the margins often slightly dentate in the upper half, glossy dark green above, pale green below, at times spotted by glandulae, aromatic; the new leaves have an intense red colour. The inflorescences are axillar, often on the part of the branches without leaves, with yellowish-white flowers with 4 lobes of 2 mm of diameter; the male flowers have red stamina longer than the petals. The fruits, present naturally only on the female plants, are globose drupes, persistent for some months, of red or blackish purple colour, of about 6 mm of diameter and containing one seed only.

It propagates by seed and by semi-woody cutting in summer in soil with 50% of agri-perlite kept constantly humid. It is a very ornamental species, for the foliage as well as for the flowers, in the female plants, with a rather slow growth, cultivable in full sun or partial shade in the tropical, subtropical climate zones and also in the warm temperate ones, where it can resist to temperatures as low as -6 °C for a short time.

Of easy cultivation, it is not particular about the type of soil, provided well drained, and once well rooted it can resist to periods of dryness; it is therefore suitable also for rocky gardens and Mediterranean type ones, as isolated specimen, in group or for edgings, even low. It stands well the prunings and can be easily shaped, it is therefore also an excellent subject for the topiary art; finally, it resists well to the saltiness and so can be utilized close to the sea also as protective fence. When in pot, it requires soils rich of organic substance with addition of coarse sand or agri-perlite around the 30% in order to improve the drainage. The cut branches are often utilized in the floral compositions.

The green leaves and the dried fruits are used in the traditional medicine for various pathologies, in particular, the fruits due to their antihelmintic (vermifugal) and laxative. In the countries of origin, the leaves are utilized as fodder for livestock.