The Myrtillocactus geometrizans (Mart.) Console (1897) is native to central and southern Mexico (Federal district and states of Hidalgo, Oaxaca, Puebla, Queretaro, San Luis Potosi, Tamaulipas, Tlaxcala and Veracruz), where it grows in deciduous tropical woods and xerophilous wood lands, between the 1000 and 2000 m of altitude.

The name of the genus is the combination of the Latin word “myrtillus” = bilberry and cactus, with reference to the fruits similar to those of the bilberry (Vaccinium myrtillus); the name of the species comes from the Latin “geometria” = geometry, with possible reference to its symmetrical structure. 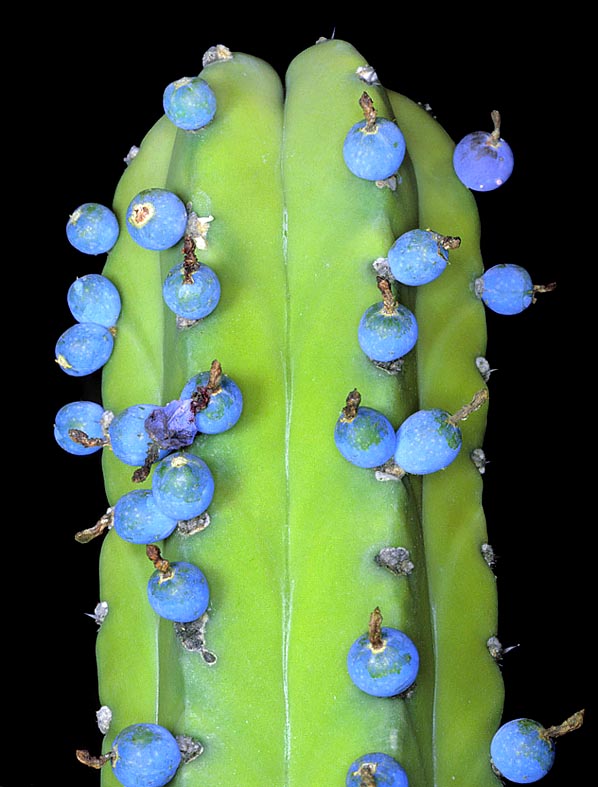 Columnar, very ramified, plant which, with the time, forms a thick candelabrum-like structure, tall and broad up to 5 m, with arcuated, ascending, stems of about 10 cm of diameter, of a bluish green colour.

The stems have 5-6 ribs with rounded margin and elliptical, 5-19 mm long areolas, spaced of 2-3,5 cm; these last are provided with 5-9 rigid radial thorns of 2-10 mm of length, of a brown-red, tending to grey with the time, colour, and one central, present at times, thorn, long 2-6 cm, black tending to grey.

The flowers, 2-3 cm long and 2,5-3,5 cm of diameter, originate in groups of 5-9 from each areola; they have oblong tepals of 8-15 mm of length and 4-7 mm broad, the outer ones being yellowish green with serrate margin, the inner ones yellowish white.

The fruits are globose, 10-20 mm long, with a colour similar to the bilberries, with edible pulp containing 1-2 mm long seeds.

It reproduces by seed and by cutting, to be placed for rooting when well dry in full summer.

Plant of great ornamental and landscape value, due to its shape and colour, ideal complement of vast “desert” gardens in areas with mild and dry winters. It is to be cultivated in full sun, or, however, in the maximum possible luminosity, on particularly draining soils, as it is rather sensitive to root rottenness due to stagnating humidity, soils which can be formed by about the 50% of common manure garden earth and for the rest, in equal quantity, by sand (agri-perlite) and crushed stones.

It can bear, in dry soil and for short time, temperatures as low as -4 °C, but it is better not to expose it to temperatures lower than +8 °C, in order to avoid the formation of anti-esthetic dots and suberifications on the surface of the stems; therefore, where the climate does not allows its cultivation in open spaces, it is to be cultivated in rather capacious pots with the same aforesaid instructions. In summer, during its vegetative period, it is to be regularly watered, but allowing the mould to dry up completely before watering again; in winter it is to be kept dry. The plant is one of the most utilized by collectors as rootstock and the crested forms are much appreciated and sought for.

The flowers, boiled or fried, as well as the fruits, fresh or dried, are eaten in the origin places. The plant is inscribed into the appendix II of the CITES (plant for which the trade is ruled at international level).

Myrtillocactus geometrizans was last modified: May 8th, 2018 by Giuseppe Mazza