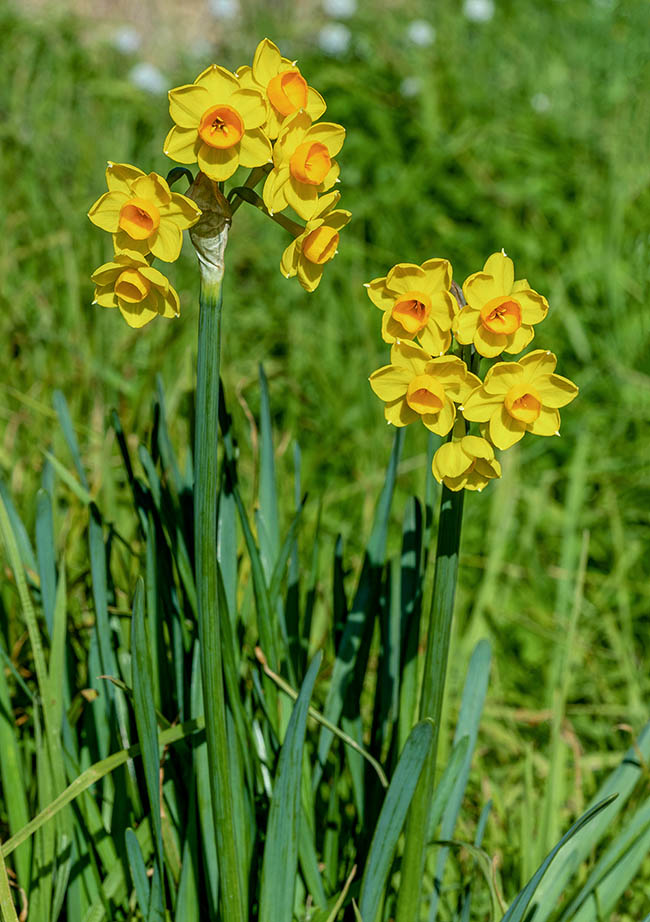 Narcissus tazetta L. subsp. aureus (Jord. & Fourr.) Baker   is a bulbous herbaceous plant belonging to the family of the Amaryllidaceae.

The genus Narcissus, whose etymology is probably referring to the old Greek ναρκάω, “nàrke” = numbness, referring to the effects caused by its intense fragrance (or, alternatively, linked to the mythological character of Narcissus (Νάρcισσος, Narkissos) too beautiful and in love with himself), includes a number of species variable between 16 and about 160, according to the different taxonomic treatment utilized by the various Authors and to their concept of “species”.

One of the most diffused daffodils in the Mediterranean area is surely Narcissus tazetta L., where the epithet of the species, “tazetta” refers to the corona whose shape recalls a “cup”.

The species has a distribution range quite vast, extended in a good part of the entire Mediterranean basin.

From the taxonomic point of view the treatment of the remarkable morphological variability of the species has found different interpretations, leading in some cases to the recognition of distinct entities at specific or sub-specific level.

This last entity, originally described as a separate species, is quite well characterized due to its morphological characteristics.

From the etymological point of view, “aureus” comes from the Latin “aurum” = gold, referring to the colour of the flowers.

It is a 20-40 cm tall herbaceous plant, glabrous and having a big ovoid bulb. The leaves are 4 to 6, green or glaucous, 10-15 mm broad, flat and with obtuse apex. The leaves have the same, or greater length compared to the stem. The flowers, often scented, blooming from February and March, are umbelliform inflorescences with 8-15 elements, supported by an erect multiflorous stalk.

The perigone, of about 30 mm of diametre, is formed by yellow oval-lanceolate tepals, whilst the corona, with its characteristic shape of a “small cup”, is coloured of a little darker yellow and has a diametre of 6-9 mm. 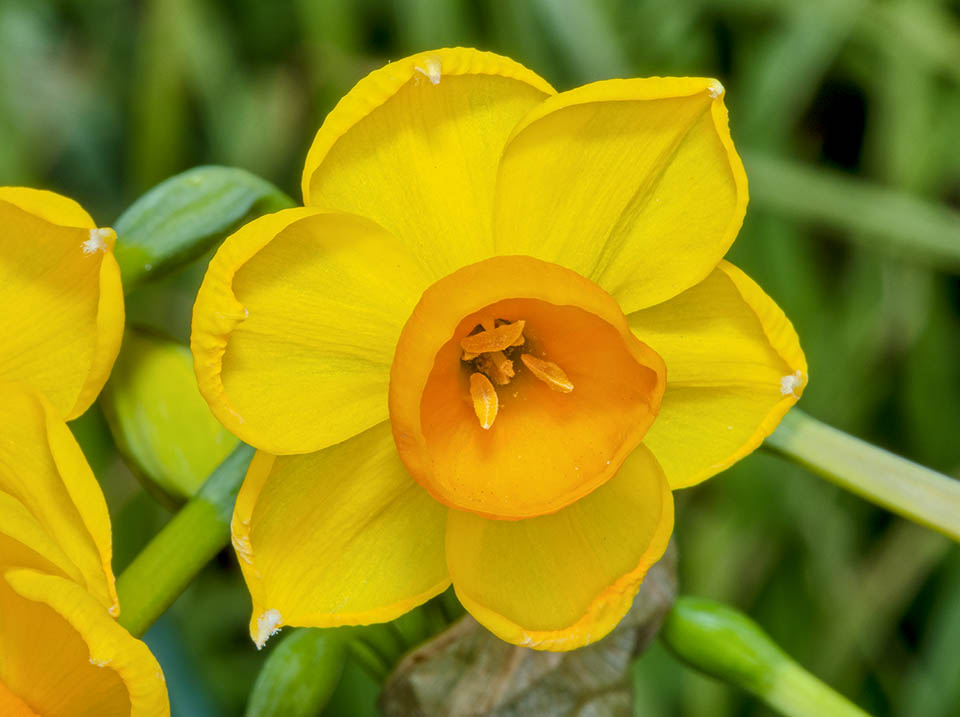 The flowers, with an about 3 cm diametre, have oval-lanceolate yellow tepals. The “cup-shaped” corona is golden, 6-9 mm broad © Giuseppe Mazza

The spathe is broad, longer than the peduncles. The characters permitting to distinguish it from the other subspecies of Narcissus tazetta are mainly the wide and grooved leaves and the flowers with yellow laciniae, slightly shorter than the tube, and the corona of yellow golden colour (well distinguished from the colour of the laciniae).

The subspecies is diffused in the western sector of the Mediterranean and in particular in south-eastern France, north-western Italy, Sardinia and north-western Africa, where it is mainly linked with grassy areas, clearings of the woods and also synanthropic environments.

Thanks to its ornamental qualities it is at times cultivated in gardens, preferring sunny expositions and well drained soils