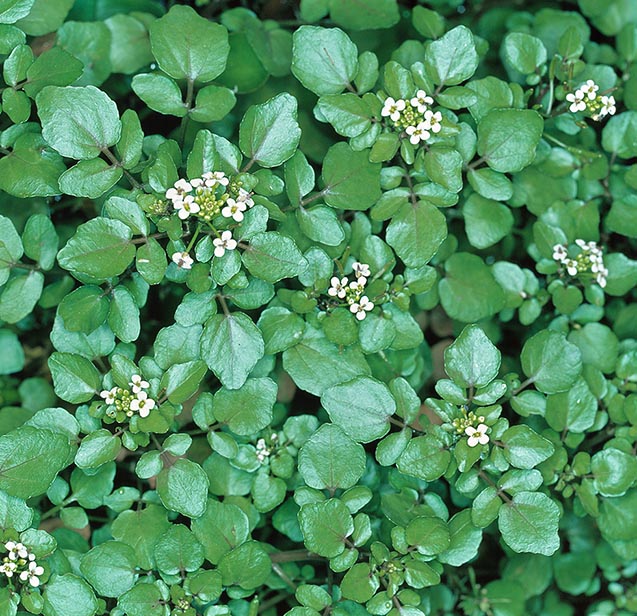 The Watercress (Nasturtium officinale R. Br. 1812) is a species present in almost all the world, but in some zones (Africa, America and New Zealand) it seems only naturalized. The genus Nasturtium includes 20 to 50 species (depending on the systematics of various Authors) scattered in various areas of the planet.

The name of the genus comes from the Latin “nasus”, nose and “tortus”, crooked “nasi tortio”, or “nasum torcere”, to turn up the nose (Pliny) due to the sour taste of leaves and seeds of this and of others of similar genera containing mustardy substances.

The specific name “officinalis” comes from the Latin substantive “officina”, used for most plants having medicinal properties employed in the “officinae” as were called the pharmacies of yore.

The fruits (siliques) of 2 x 13-18 mm containing two series of tiny seeds (4000 in one gram!) ovoid, brown-reddish, per valve, with about 25 areoles (polygonal depressions) on each face (the alike Nasturtium microphyllum, with later flowering and 16-18 mm siliques usually with one row of seeds per valve, has about 100 areoles on each face of the seed).

The flowering prolongs, depending on the climatic zones, from March to July. This species is common, and almost always in dense colonies, in the still waters or little moving, sources and resurgences, banks, from the plain, as an average, up to 1500 m of altitude (<2460 m). Its presence is sign of good quality water. 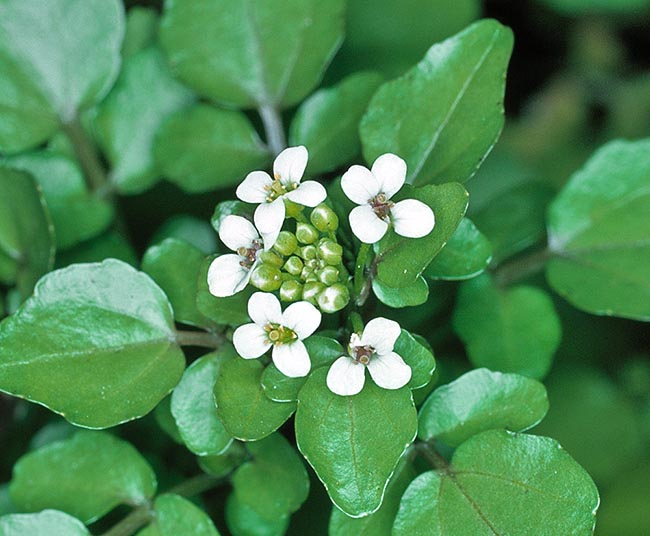 Edible and medicinal, it's often grown, but collection in nature is not advised due to hygienic reasons © G. Mazza

The whole plant, harvested in April, devoided of the roots, contains a sulphide glucoside (gluco-nasturtin) which by hydrolysis induced by the myrosin enzyme splits in glucose and isosulphocyanate of phenethyl, besides iron, zinc, copper, manganese, magnesium, iodine, phosphorus, nicotinic acid, traces of arsenic, vitamins A, B1, B2, C, E and enzymes. The mentioned vitamins confer anabolic and antiscorbutic properties. It is used in the cases of exhaustion, anemia and vitamin deficiencies, in the skin diseases deriving from them, in the eczemas and alopecias of the scalp (concentrated juice) as diuretic and draining depurative, fluidizer and expectorant of the phlegm of the airways.

The frequent consumption of this vegetable, present during the whole year is suggested to the heavy smokers because it is able to depurate the organism from the nicotine and to the diabetics because it decreases the blood glucose levels. The consumption of cress is not advised to the persons suffering from recurrent cystitis.

It is highly recommended for this as well as for other plants growing in the water, to avoid the zones with presence of chemical or organic pollution and to carefully wash the leaves and other edible parts in order to eliminate the small molluscs they usually host (especially Lymnaea palustris), vehicle of dangerous parasites (Fasciola hepatica) of the liver, and the disastrous infections of icterus-haemorrhagic leptospirosis (Weil’s disease or spirochaetosis) transmitted by the mice.

The Greek mythology reminds that the watercress was contained in the box given by the gods to Pandora for her marriage along with other useful gifts and manifold misfortunes.

From the gastronomic point of view, this species is much appreciated and cultivated in Germany and in France, where it is, in addition, deemed to be an aphrodisiac plant. It was the French Cardon in 1811, who introduced its cultivation in artificial cressonières. 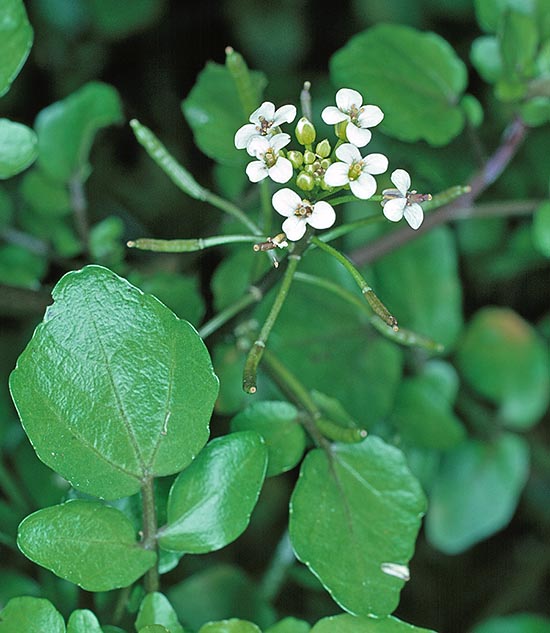 The flowers are followed by siliquae with tiny seeds: about 4000 per gram © Giuseppe Mazza

The acidulate, spicy and slightly sour young leaves of watercress, besides in salad, can be consumed crushed and put on buttered bread croutons, on fresh cheeses, on the grimed meats, in the spicy and peppered sauces.

The cultivation is very simple, it can be done also at home in small pools with 10 cm of good loam covered by 3 cm of pebble in which are to be transplanted the small plants born from the seed (easily found in the market) in small pots with equal parts of always humid earth, sand and peat. Whereupon, the pebble is to be covered by two fingers of water and the small pool is to be placed in a semi-shaded locations and, in winter, at home close to a window.

Preparations
(Warning: some sensitive persons may get gastric problems, in this case it is better to avoid the consumption of watercress, as well as of plants rich of sulphorate glycosides such as garlic, horseradish, radishes, mustard, etc.) :

To simply consume 100 g of fresh leaves in salad every day, alone or mixed with other salads for one week. Alternatively, to consume the juice of the whole plant (150 g) obtained by blending and filtering.

To chew for aphthous ulcers and weak and bleeding gums

You need two fresh leaves of watercress and one fresh leaf of sage. Put the in the mouth and chew slowly for about ten minutes, then rinse with cold water and lemon. Twice a week when needed, in the evening before going to bed.

200 cl of concentrated juice of watercress gotten passing the aerial parts of the plant in a mixer and filtering with a strainer, to be mixed in equal parts with decoction of nettle (obtained boiling in 300 cl of water 200 grams of tops or leaves foe 10 minutes and filtering as above).After having washed the hairs with a neutral shampoo (having no sodium laurilsulfate!), to dry up a little and then rub with the above mentioned preparation leaving to act for 15 minutes covering the head with a towel. Then rinse. To repeat this operation twice a week until the lotion is finished (to be kept in the fridge).

Nasturtium officinale was last modified: May 13th, 2018 by Giuseppe Mazza