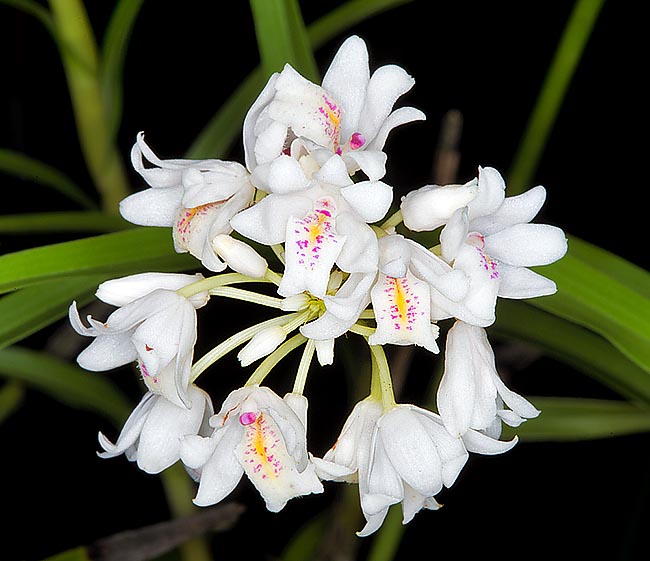 Endemic to Tanzania, the Neobenthamia gracilis is a terrestrial species with 0,5-1,2 m stems. Almost spherical inflorescences of 12 cm of diameter. Robust species rich of perfumed flowers lasting even one month © Mazza

The species is native to Tanzania where it grows on rocky slopes up to about 2000 of altitude.

The genus is honoured to the English botanist George Bentham (1800-1884) with the Greek prefix “νέο-” (neo-) = new, in order to distinguish it from the genus Benthamia previously establi- shed; the name of the species is the Latin adjective “gracilis” = delicate, thin, with reference to the appearance of the stems.

The Neobenthamia gracilis Rolfe (1891) is a terrestrial species with thin ramified stems, of a rather disorderly look, 0,5-1,2 m long or more, with alternate, distichous, curved, linear, with bitoothed apex, 13-20 cm long and 1-1,5 cm broad.

Compact racemose terminal inflore- scences, almost spherical, of about 12 cm of diameter, bearing numerous close flowers, of about 2 cm of diameter, which do not open completely, produced in succession for a long period, up to 4-5 months.

It reproduces by seed, in vitro, division and easily through the new plants, abundantly produced, which form on the nodes of the old stems (in jargon “keiki”, which in Hawaiian means “sons”), that can be detached when they have formed a good rooting apparatus.

Robust species that clumps quickly, floriferous, with tiny flowers delicately perfumed singularly of long duration, about one month, requires full sun, medium-high temperatures, 20-30 °C, and high atmospheric humidity; can grow in open air in the tropical and subtropical zones and is not particular about the soil, provided it is draining and maintained almost constantly humid. Elsewhere, it can be cultivated in pot in order to be sheltered during the colder months in particularly luminous ambient, aerated, like a veranda or behind a window looking south, with lowest night temperatures preferably not under the 14 °C, using a perfectly draining loam rich of organic substance with addition of sand for a 30% or a compost formed by medium sliced fragments of bark and sphagnum to maintain the humidity. For the waterings it is good practice to utilize rainwater, demineralised or from reverse osmosis, and for the fertilizations, every 2-3 weeks during the growth period, hydrosoluble balanced products, with microelements, at half the dosage suggested on the package.

The species is reported in the appendix II of the CITES (species whose trade is internationally ruled). Due to the progressive reduction of its habitat, caused by the expansion of the agriculture, has been inserted in the red list of the species endangered of extinction of the IUCN (International Union for the Conservation of Nature) as “vulnerable”.