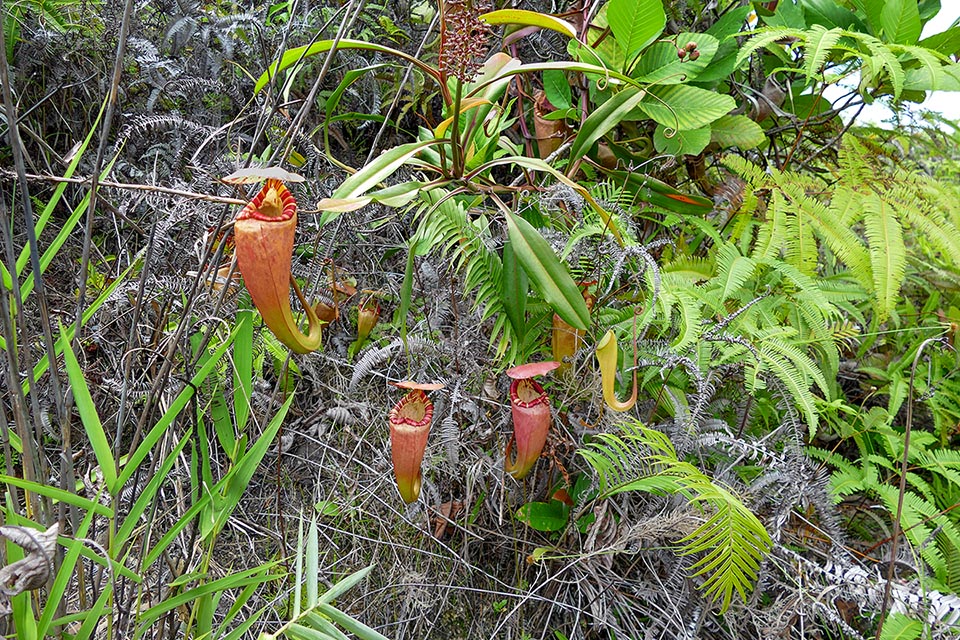 Nepenthes sumatrana (Miq.) Beck (1895) is a carnivorous plant of the family Nepenthaceae endemic to the northern and western region of Sumatra (Indonesian Archipelago). It is known especially on the hills around Sibolga, where it was collected for the first time in February 1856 by Johannes Elias Teijsmann (1808-1882).

Günther Beck von Mannagetta und Lerchenau (1856-1931) was the first to call it with its present binomial combination, considering it, however, a variety of Nepenthes maxima. 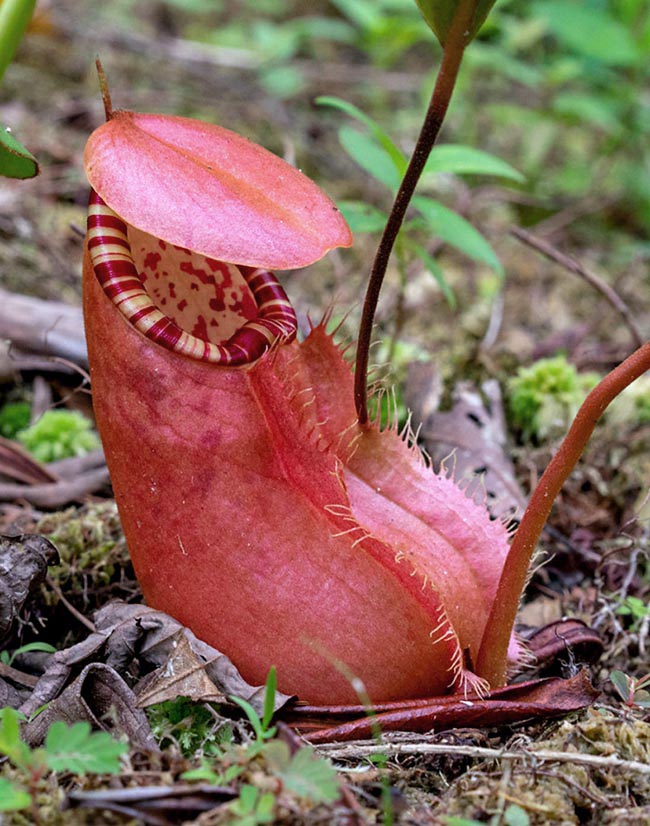 Inferior ascidium with the typical ovate shape in the lower half and cylindrical in the upper one. The wide wings help the crawling preys to climb, attracted by the peristome, that then makes them slide inside © Tom Ballinger

In 1986, Rusjidi Tamin and Mitsuru Hotta (1935-2015) recognized Nepenthes sumatrana as a species distinct from Nepenthes treubiana due to significant morphological differences.

For instance, Nepenthes sumatrana does not have teeth on the inner edge of the peristome, the hairs on the margins of the leaves are absent, and, if present, are simple and the nectariferous glands of the cover are bigger than Nepenthes treubiana.

The binomen Nepenthes sumatrana has been formally reinstated by Matthew Hilary Peter Jebb (1958 -) and Martin Cheek (1960 -) in the treatise “A skeletal revision of Nepenthes (Nepenthaceae)”published on the Journal Blumea (1997), even if the included this taxon in Nepenthes longifolia Nerz & Wistuba.

The name of the genus Nepenthes comes from the old Greek adjective “νηπενθής” (nipenthos), formed by the negative prefix νη, “nê, not, and the name πένθος, penthos “sadness, pain”. Adjective used by Homer to indicate the beverage “Nepenthes pharmakon” that Helen, furtively, has poured into the wine that Telemachus, son of Odysseus, and Menelaus, Prince of Mycenae and her husband, were drinking in order to soothe, thanks to its action of deleting the memories, the pain and the nostalgy for the distance from their native country. Linnaeus in his opus “Species Plantarum, 1753” named Nepenthes distillatoria L. a plant coming from Sri Lanka imagining that the sight of this wonder of Nature, after such a long voyage, would make them forget the hardships they had gone through for finding it.

The specific epithet refers to Sumatra, the origin distribution area of the taxon.

Nepenthes sumatrana grows on sandstone substrata in the humid plain forests with Dipterocarpus (Dipterocarpaceae, Malvales), on steep cliffs and slopes of hills and crests, in mottled shade, whilst rarely is found in open areas. 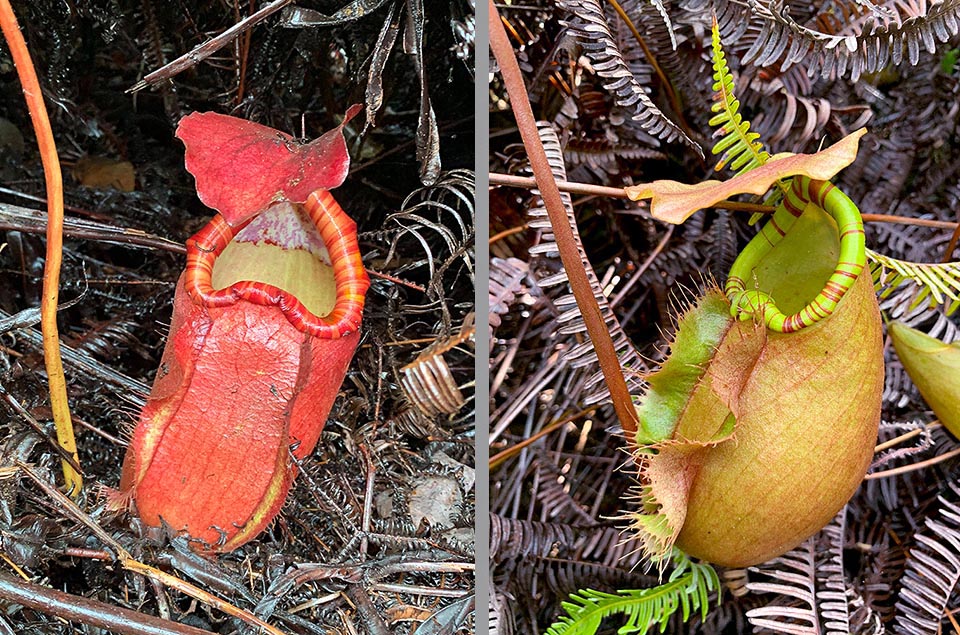 Inferior ascidia are yellow, orange, flesh pink or red, at times with reddish streaking. The inside is cream white or yellow, often with big red or violet spots © François Mey

The deforestation for agriculture and the plantations have strongly reduced the number of individuals with the consequent risk of extinction. As a matter of fact, after the IUCN Red List, the conservation status of this species has been classified since 2013 “under critical risk” (Critically Endangered CR).

It is also to be noted that its distribution area is still uncertain also due to the difficulty to distinguish it on the field from the cognates Nepenthes beccariana and Nepenthes longifolia. It could be also mistaken with Nepenthes rafflesiana.

This makes all the projects aimed at its conservation quite difficult. It is thought, however, that Nepenthes sumatrana could be found in other regions of Sumatra and as it is not possible to examine all the places on the island, recently an approach has been advanced, through the use of modelling of the habitat, which is an alternative and valid method for individuating the presence of a species in not explored areas. 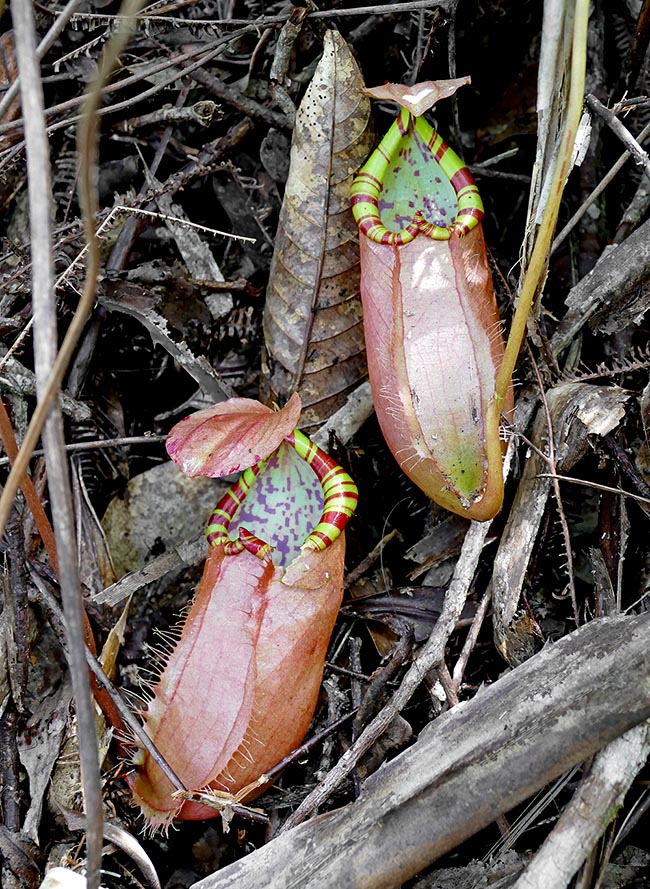 As the plants grow, from the basal trunk may form buds and basal rosettes that generate another type of inferior ascidia. These ones are taller than the previous (up to 20 cm and 10 cm broad) usually of cylindrical shape, with a slight constriction just under the peristome. They too serve to trap crawling preys © François Mey

In order to predict suitable habitats to Nepenthes sumatrana, a study has been done based on a maximum entropy algorithm (MaxEnt) that has taken into consideration three important biophysical variables: soil organic carbon, annual rainfall and gradient. The results have shown that suitable habitats exist in the Bukit Barisan mountain range, 1.700 km, located on the western coast of Sumatra that runs from the extreme south (Lampung) up to the northernmost part of the island (Aceh).

Thanks to these results it will be possible to effect targetted field research.

Nepenthes sumatrana has yellow, green or grey stems, climbing, sub-cylindrical, up to 15-18 m long, 0,9 cm thick, with 20 cm onternodes. The lamina of the leaves is green, oblong or lanceolate, occasionally ovate in the young plants, up to 55 cm long and about 9 cm broad. The margin is bordered by short brown-reddish hairs. The tendrils, that may reach the 60 cm, are yellow, green or, if exposed to the sun, reddish. The apex of the leaf is sharp, obtuse, rounded or emarginate, whilst the base is attenuate, with winged petiole, up to 8 cm long, that wraps the stem and that, at times, prolongs under its insertion becoming decurrent.

The adult plants are mainly hairless, only rarely can be found some of them of grey or brown colour but they get off easily.

A particularity typical to Nepenthes sumatrana is given by two types of inferior ascidia.

The young plants produce ascidia ovate in the lower half and cylindrical in the upper one. They are up to 14 cm tall and 6 cm broad with up to 10 mm wide wings, bordered by narrow filaments, up to 6 mm long. The peristome is cylindrical, up to 8 mm broad and covered with thin veins spaced up to 0,3 mm each other. The fore part of the peristome is raised to form a short crest. The cover is orbicular or ovate, with a cordate base, often with wavy margins. The spur is not ramified and is up to 15 mm long. 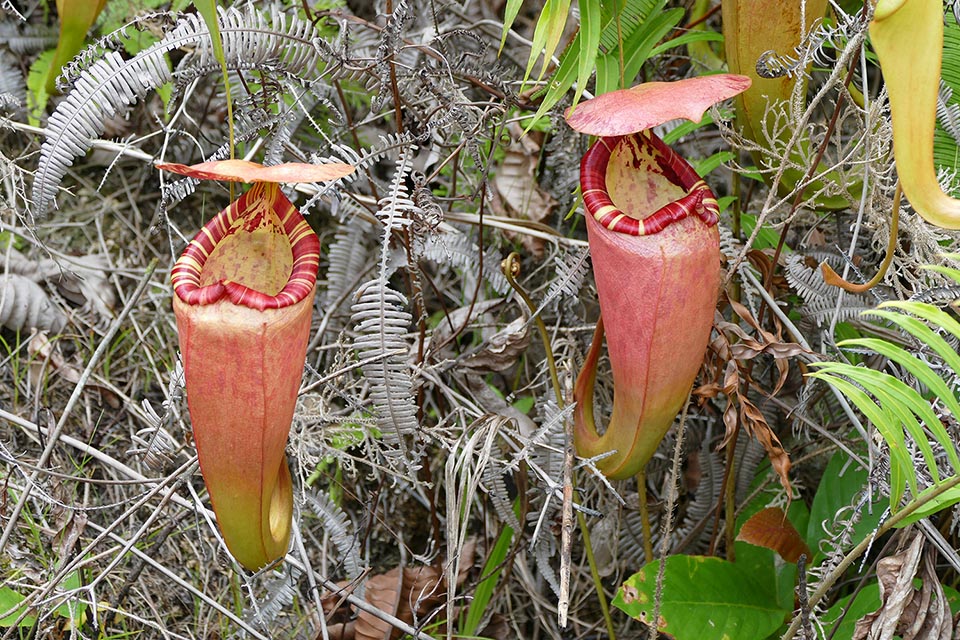 No less colourful superior ascidia, are up to 30 cm tall and 15 cm broad. Their base, at the tendril, bends brusquely backwards and the wings are reduced to narrow crests. The cover emits abundantly a very fragrant nectar for attracting the flying preys in addition to the crawling ones caught by the inferior ascidia © François Mey

As the plants grow, from the basal trunk may form shoots and basal rosettes that generate another type of inferior ascidia.

These are up to 20 cm tall and are 10 cm broad and are of ovate or cylindrical shape, with a slight constriction just under the peristome. The wings are up to 12 mm broad, bordered with filaments of about 10 mm, and go down along the fore part. The peristome is up to 14 mm broad.

The colouring of both types of inferior ascidia can be yellow, orange, flesh pink or red, sometimes with reddish speckles. The inside is cream white or yellow, often dottedby big red or violet spots. The peristome is yellow, orange or red, streaked with purple bands. 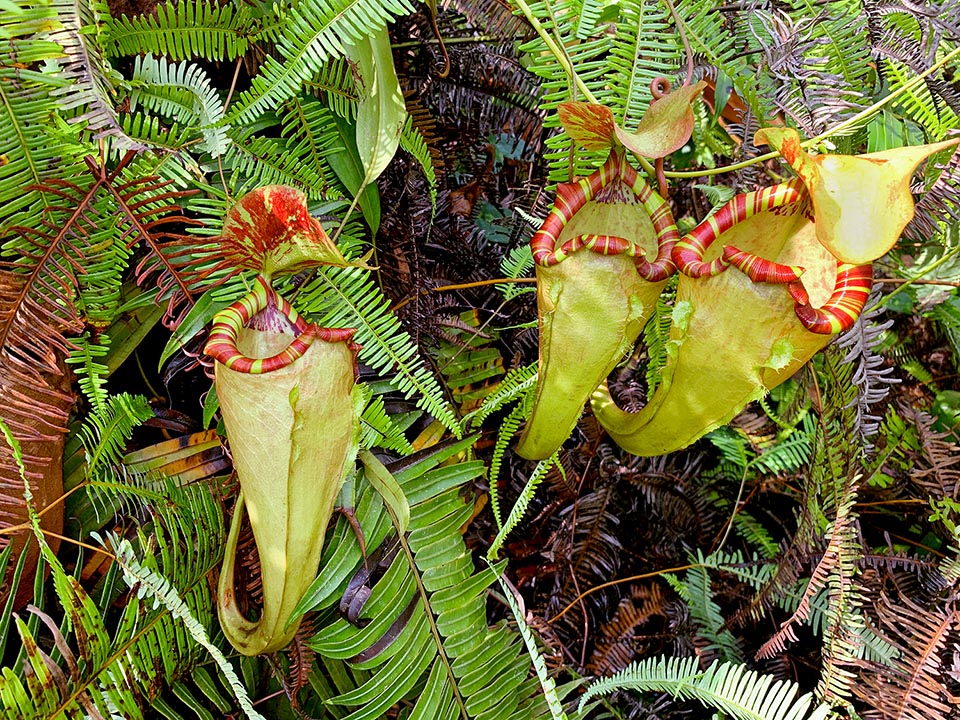 Distinctive characteristic of the species is the presence of superior ascidia totally infundibular and cylindrical peristome expanding forward, towards the palpebra, with two high protuberances. In the traps of this species have been found ants, larvae of mosquitoes, crickets, cockroaches, spiders and small insects of the Rhyparochromidae family © François Mey

When the plants get longer and climb, they generate the superior ascidia that are wholly infundibular, up to 30 cm tall and 15 cm broad. However, shape and size may vary. In fact, some may be shaped like a funnel, others are elongated.

Their base, at the tendril, curves sharply backwards. The wings are reduced to narrow crests. The opening of the ascidium is oblique and often is raised in the front. The peristome is cylindrical, up to 10 mm broad, and is covered by thin veins up to 0,3 mm tall, spaced up to 0,3 mm each other.

The peristome is often raised brusquely in the fore part of the opening to form a short and ample crest. The nectar is secreted abundantly on the lower surface of the cover and is quite fragrant. The ascidium externally can be green, yellow, orange or red, whilst inside is cream white, pale yellow or orange, often spotted with dark red or violet. 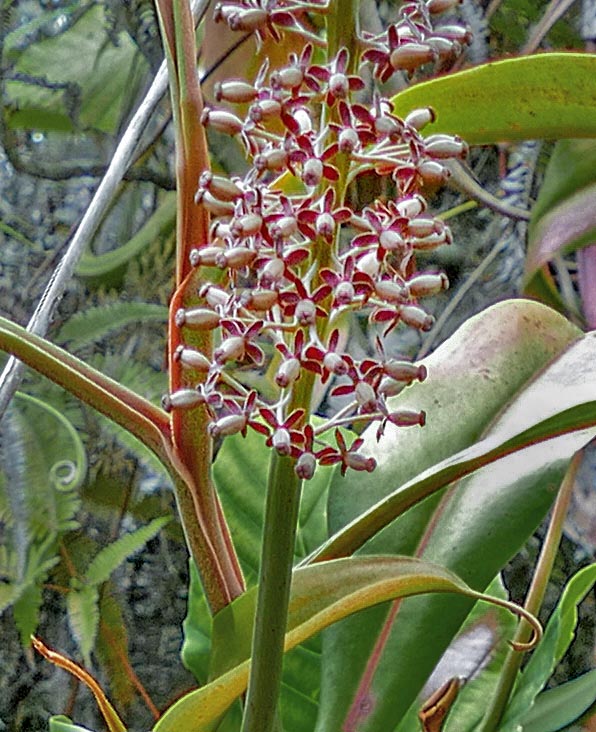 Particular of female inflorescence supported by a long peduncle and with a rachis usually shorter than male inflorescences. The pedicels bear 1-2 flowers with the perianth formed by 4 free tepals © François Mey

The peristome is yellow, green, orange, red or violet and often streaked with pale yellow or bright red.

The function of both types of inferior ascidia is to trap crawling prey, chiefly wingless, whilst the upper ones attract the flying prey.

In the ascidia of Nepenthes sumatrana have been found several arthropods, in particular: ants (Formicidae), larvae of mosquitoes (Culicidae), crickets (Gryllidae), cockroaches (Ectobiidae), spiders (Araneidae) and small insects of the family Rhyparochromidae.

Some Authors believe that the two distinct types of inferior ascidia are a specific adaptation as a nutrition stress response that characterizes the habitat where the plant grows. In fact, for a more efficient capturing of the prey, Nepenthes sumatrana has the peristome moderately developed, little wax, and the ascidium liquid rather viscous able to immobilize the captured prey.

The flowers are grouped in racemose inflorescences up to 90 cm long. Their peduncle is up to 20 cm long and the rachis up to 70 cm.

The female inflorescences have a longer peduncle, up to 30 cm, and a rachis, usually shorter, less than 40 cm.

Nepenthes sumatrana is a fast growing plant loving the heath and the shade and is much sought after by the collectors. The specialized market offers seeds as well as clones obtained in cultivation. For this a terrarium is necessary that will have to restore the conditions of the tropical plant with humidity above the 80% and constant temperatures both day and night, usually 25-28 °C.