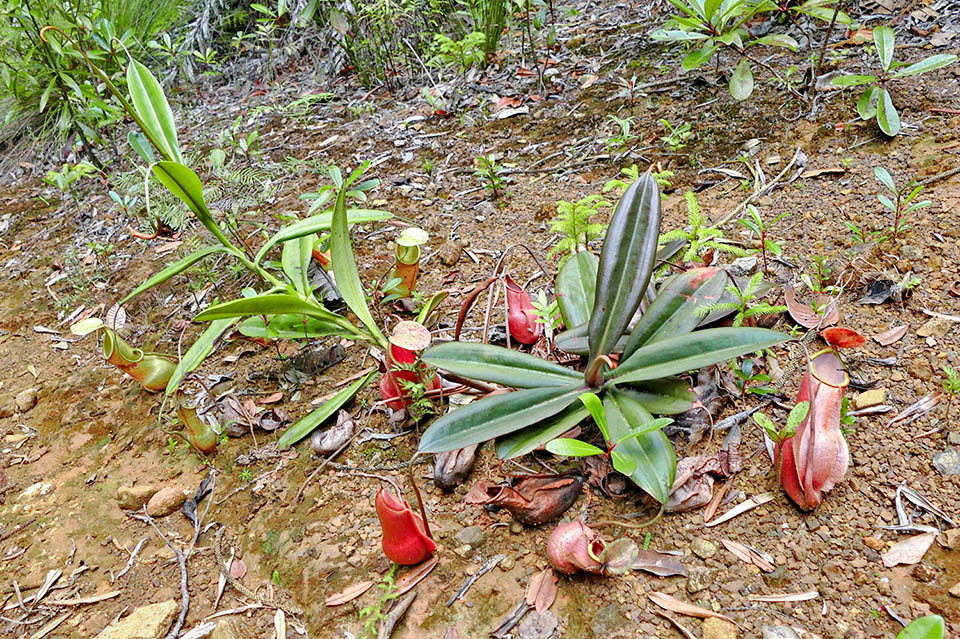 Endemic to New Caledonia, Nepenthes vieillardii marks the eastern limit for the carnivorous plants belonging to the Nepenthaceae © Benoît Henry

Nepenthes vieillardii Hook. f. (1873) is a carnivorous plant of the family Nepenthaceae diffused in New Caledonia where it is found on the plain, at the edge of ponds, in the dry thicket-forest and in the open areas up to 850 m of altitude.

Its distribution is the easternmost of all the Nepenthes species because it is found in the south-western zone of the Pacific Ocean at about 1500 km east to the Australian coast.

The islands of New Caledonia were born as part of the Gondwana supercontinent and were separated from Australia between the Triassic and the end of Jurassic to then move adrift in the north-east direction, reaching their present position about in the Eocene (50 million years ago).

The isolation has preserved the original species and in the same time favoured the formation of many endemisms. As a matter of fact, among the more than 3000 species of flower plants present, 79,5% are endemic species. 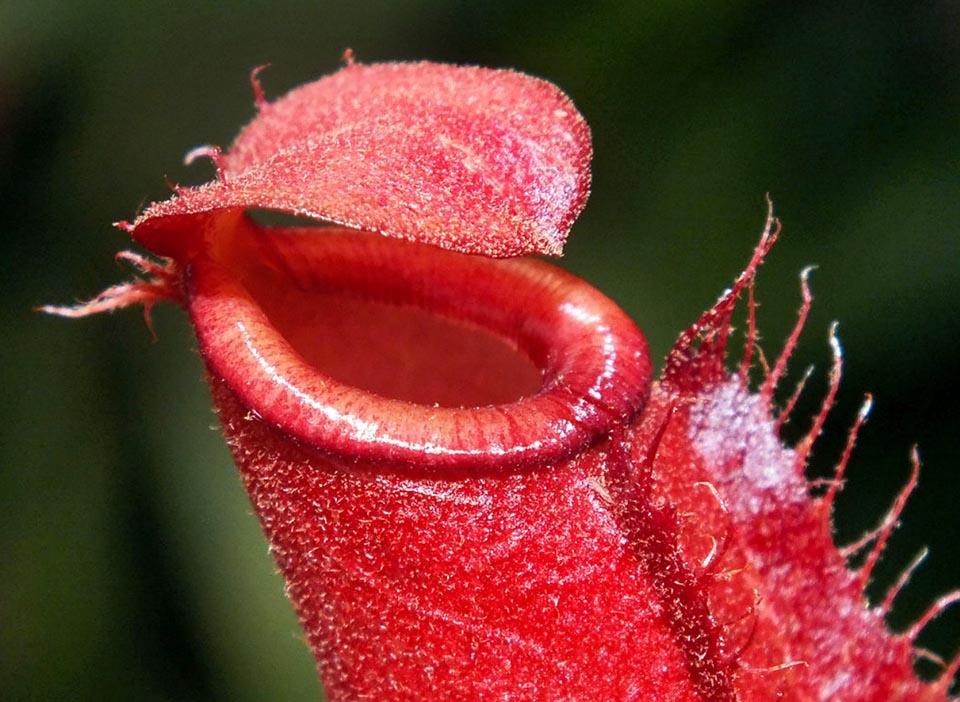 Close-up of a flaming lower ascidium. 4 to 11 cm tall, it has two prominent veins or, as in this case, two fringed wings © Shadowshador

It is hypothesized that the ancestral types of Nepenthes vieillardii presented edaphic tolerance to the serpentine soil and so their descendants should have been able to expand their range on the ultrabasic soil rich in ferrous oxides. Therefore, it is probable that the substratum of serpentine has favoured the increase of the range of the Nepenthes vieillardii, being a carnivorous plant that does not need to draw nitrogen from the substratum.

The name of the genus comes from the old Greek adjective νηπενθής, nipenthos, formed by the negative prefix νη, “nê, non”, and the name πένθος, penthos “sadness, pain”.

Adjective used by Homer to indicate the drink “Nepenthes pharmakon” that, after the legend, Helen poured secretly into the wine that Telemachus, son of Odysseus, and Menelaus, Prince of Mycenae and her husband, were drinking as it was capable to soothe the pain, erasing the memories and the nostalgy caused by the distance from their hometown. 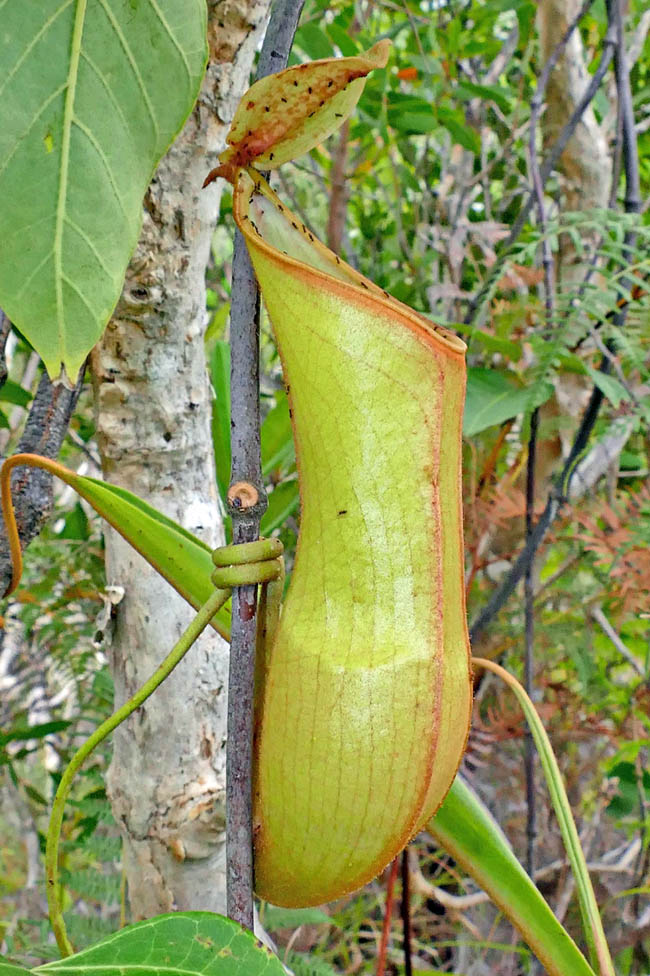 The ascidia may be red or yellowish. The upper ones, infundibuliform to the opening, are usually tubulous, somewhat narrowed in the central part and 4 to 14 cm tall. We note several small ants, present on the cover and the peristome, that attracted by sugary substances, risk to fall with no escape into the digestive liquid well © Benoît Henry

Linnaeus in his opus “Species Plantarum, 1753” called Nepenthes distillatoria L., a plant coming from Sri Lanka imagining that the view of this wonder of the Nature, after such a long voyage, would make them forget the toils sustained for finding it.

The specific epithet vieillardii is honoured to Eugène Vieillard (1819-1896), French physician and botanist who from 1855 to 1857 collected plants in Tahiti with the gardener-botanist Jean Armand Isidore Pancher (1814-1877)

and later in New Caledonia where he was colleague to the naturalist Émile Deplanche (1824-1874). Once back in France he was director of the Botanical Garden of Caen from 1871 to 1895.

Nepenthes vieillardii has climbing stems with 6 cm to much shorter internodes bearing leaves mostly 5 to 20 cm long, and 1 to 4 cm broad. Those at the top are coriaceous, lanceolate whilst those below are oblong or spatulate. The base of the leaves is sessile, ample and decurrent in two opposite wings. The tendrils are usually longer than the leaves, with or without curling.

The lower ascidia, when differing from the upper ones, have an ovate or campanulate shape, 4 to 11 cm tall, with 2 prominent veins or with 2 laciniate wings over the whole length, with oblique opening and peristome, cover and spur like those of the upper ascidia, but with the inner margin of the peristome with teeth wider than long.

The upper ascidia may have a variable shape and originate gradually from the hanging extremity of the tendrils. They are mainly more tubulous, ventricose below, somewhat narrow in the central part, infundibuliform towards the opening. They are 4 to 14 cm tall, 1 to 3 cm broad with oblique opening and 4 to 2,5 cm broad cylindrical or flattened peristome.

The ascidia can be yellowish or reddish.

The male inflorescence is a 5-25 cm long raceme supported by a 2-6 cm peduncle. The flowers have no bracts, the loser ones are 5 to 10 mm long, the upper ones being shorter. The tepals are orbicular, elliptic, 3 to 5 mm long. The stamens, with filaments merged in column, are 2 to 4 mm long, anthers included, and do not exceed the perigone.

The female inflorescence is similar to the male one, but shorter and with floral pedicels averagely thicker. The tepals are oblong to lanceolate. The ovary is sessile and ripens a 10 to 18 mm long fruit. Pollination is done by moths.

The plants may present tomentum on the youngest parts and in the lower pagina of the leaves, but at times only on the ovary and in the inflorescences. 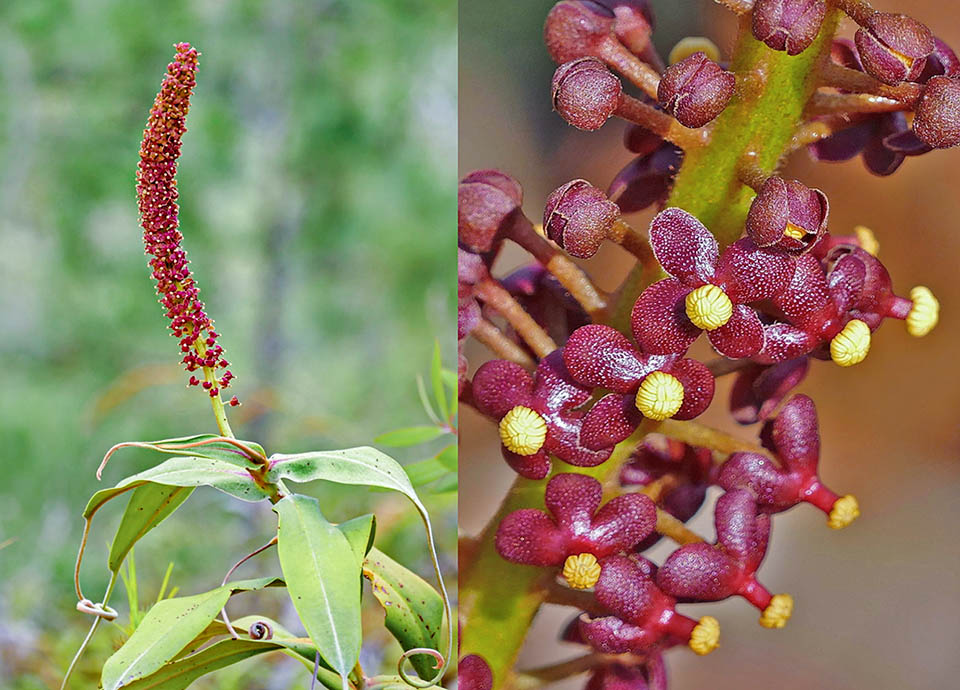 The male inflorescence is an even 25 cm long raceme. The flowers, right, have no bracts: the lower ones are 5 to 10 mm long, the upper ones are shorter. The tepals are orbicular, elliptic, 3to 5 mm long. The stamens, with filaments merged in column, , are 2 to 4 mm long, anthers included, and do not exceed the perigone © Benoît Henry

Classified in the IUCN Red List as species with minimum risk (Least Concern, LC), Nepenthes vieillardii is a species very variable in the morphology of the ascidia, of the inflorescences and of the flowers. As a matter of fact, during the last century have been described various species and varieties, but at present they are deemed not valid by the botanists.

The cultivation is not the simplest as it grows on soils formed by ultramafic rocks. However, it is recommended a substratum made by a clayey mixture (akadama), like that employed for preparing loam for bonsai or quartz gravel.

It is good to let the loam dry well between one watering and the next.