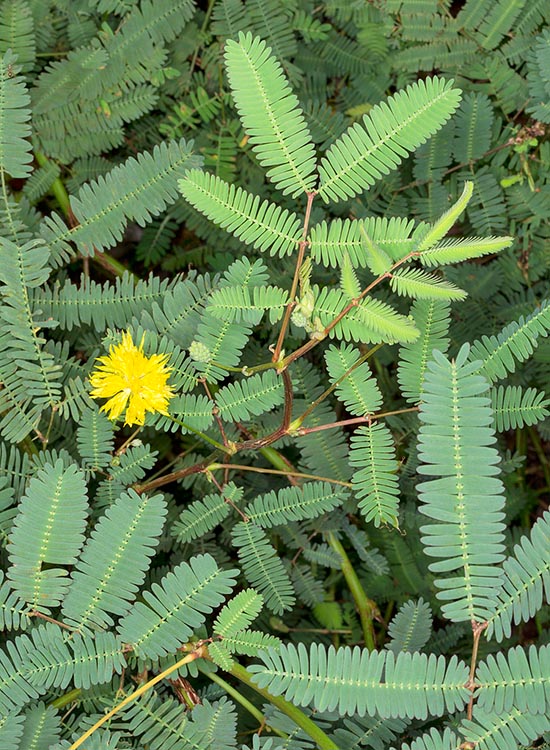 Neptunia oleracea is a tropical perennial aquatic species, floating, at times rooting in the sediment and on the banks. The leaves, sensitive like the Mimosa pudica ones, fold if touched. Can become a weed, so much that its import is forbidden in some nations © Giuseppe Mazza

The generic name comes from the Latin “Neptunus” = Neptune, god of the sea in the Latin mythology; the specific name is the Latin adjective “oleraceus, a, um” = of the same nature as the legumes.

The Neptunia oleracea Lour. (1790) is a perennial unarmed aquatic species, little ramified, floating, at times rooting in the sediment and on the banks, with prostrate stems, up to 1,5 m long, provided with fibrous roots at the nodes, capable to fix the atmospheric nitrogen, and internodes covered by a cylindrical spongy layer of white colour, of 1-2 cm of diameter, formed by a particular tissue, aerenchyma, provided with ample intercellular spaces filled of air.

This tissue, besides allowing the floating, facilitates the transportation of the oxygen in all the parts of the plant, the loss of this tissue, for whatever reason, causes its sinking.

The plants germinating on humid soils do not have the spongy tissue, have smaller leaves and flowers and die easily in the absence of water. The leaves, on a 2-7 cm long petiole, are alternate, bipinnate, about 6 cm long, formed by 2-3 pairs of pinnate opposite leaves with 8-15 couples of oblong leaflets, with obtuse apex and entire margin, 0,5-1,6 cm long and about 2 mm broad, particularly “sensitive”, like in the Mimosa pudica, of dark green colour. 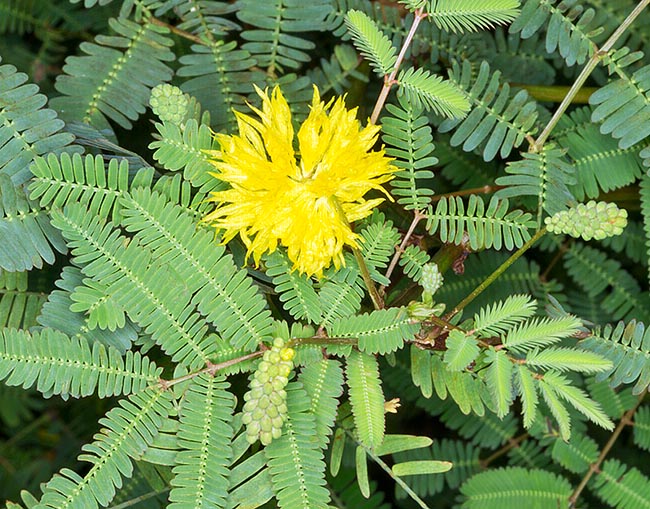 Inflorescences with tiny greenish flowers, those at the base are sterile with showy petaloid yellow stamina. Fruits are small legumes, edible raw or cooked like vegetative apices. Proteins, minerals, vitamins and medicinal virtues © Giuseppe Mazza

The inflorescences are axillar solitary spikes, on 6-18 cm long peduncle that elongates further in fruit, compact, oblong or subglobose, of 1,5-2,5 cm of diameter, formed by numerous tiny sessile close flowers with 5 greenish petals; the flowers at the base are sterile, with 10 petaloid stamina, 0,7-1,5 cm long, of yellow colour, those at the apex bisexual, with 10 stamina, 0,6-0,9 cm long, whitish and orange yellow anthers. The fruit is a flat oblong legume with pointed apex, 2-3 cm long and 1 cm broad, containing 4-9 slightly compressed obovoid seeds, about 0,5 cm long and 0,3 cm broad, of brown colour.

It reproduces by seed, but more frequently and easily by stem portions.

Species of easy and fast growth in the humid tropical and marginally subtropical climates, where it can bear temperatures up to about 5 °C during the dormancy, in full sun or at the most with a slight shade, often behaving as a weed in the rivers, canals, lakes and rice fields, for such reason in some countries its introduction is forbidden. It is cultivated, in particular in South-East Asia, at times as annual, due to the vegetative apices, the leaves and the young legumes, rich of proteins, minerals and vitamins, that are consumed raw or cooked. All parts of the plant are utilized in the traditional medicine, especially the Indian one, for various pathologies.