Oleanders to discover. All about these plants fit for Mediterranean climate. 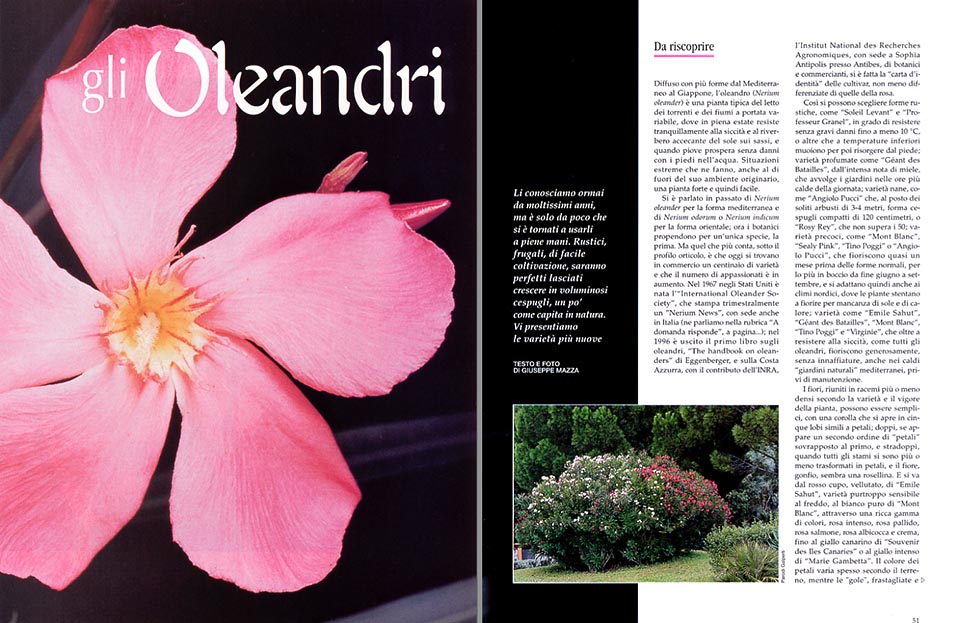 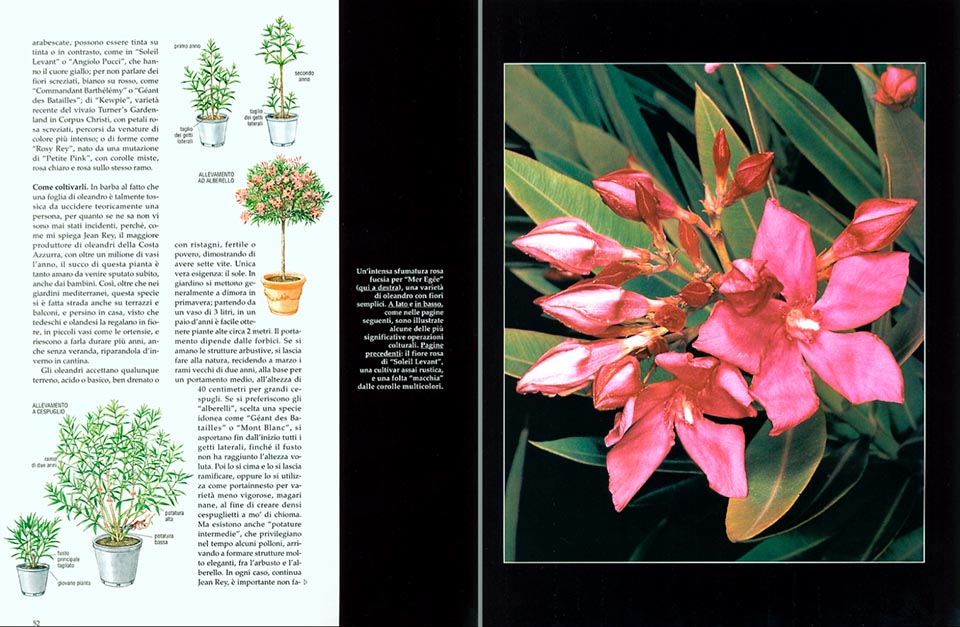 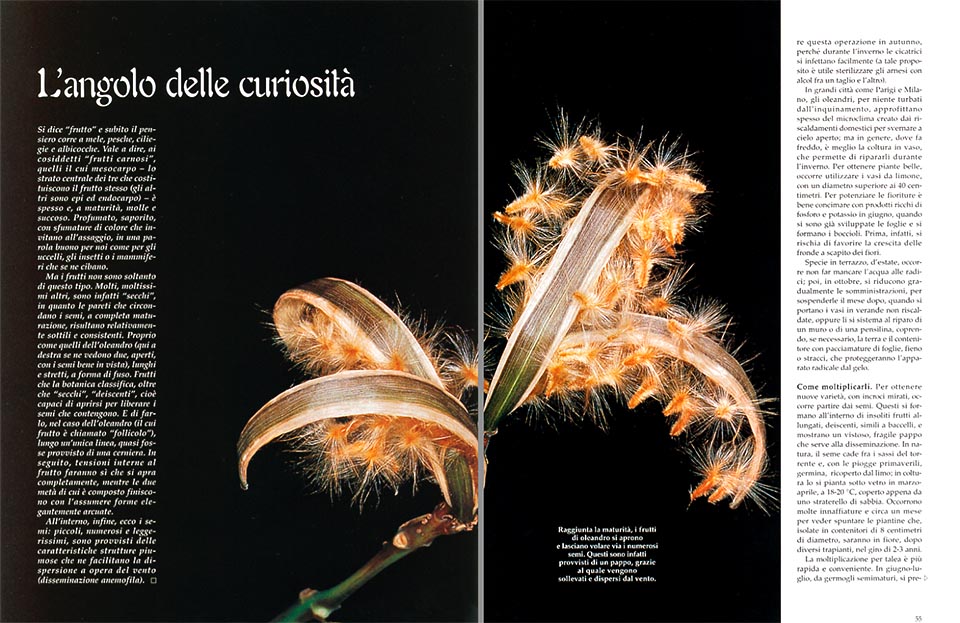 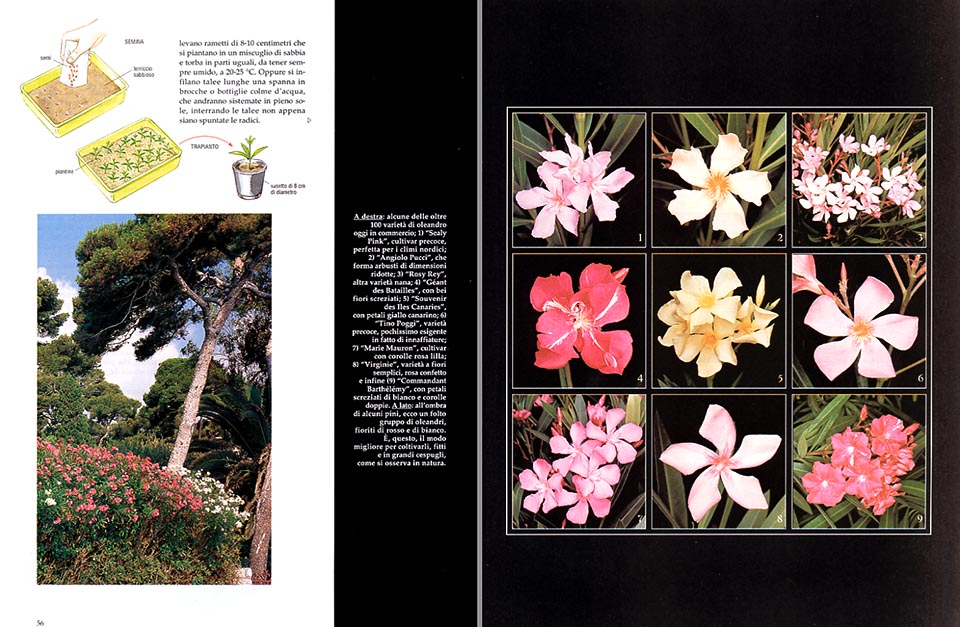 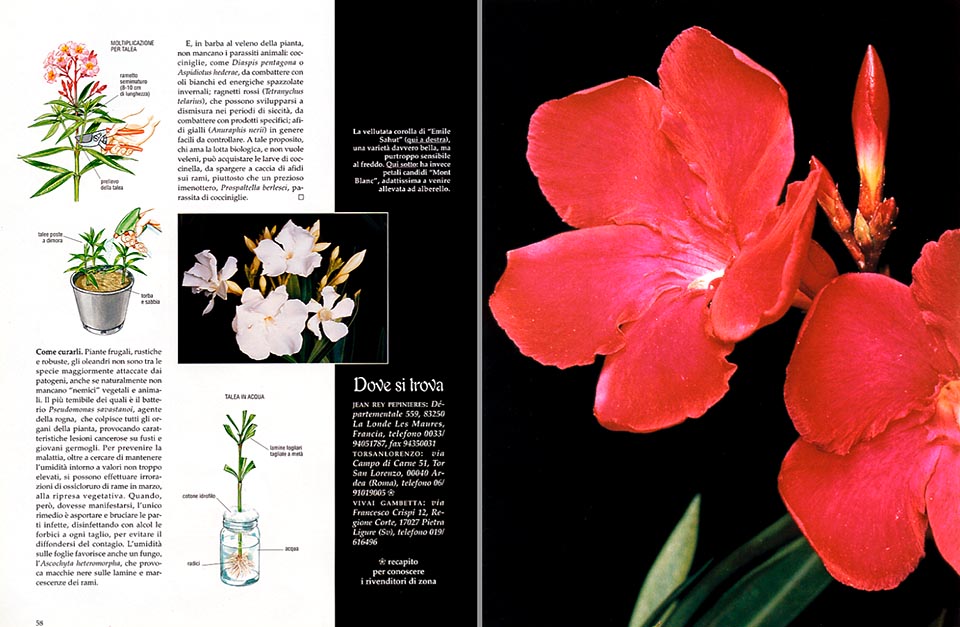 Spread, under various forms, from Mediterranean to Japan, the Oleander (Nerium oleander), is a plant native of the stream-beds and the variable flow rivers, where, in full summer, it resists, tranquil, to the drought and the blind glare of the sun on the stones, and when it is raining, thrives, without any damage, with the feet in the water.

Extreme situations, which render it, even outside from its typical habitat, a strong, and therefore easy, plant.

In the past, they were talking about Nerium oleander for the Mediterranean form, and of Nerium odorum or Nerium indicum for the eastern one; now, botanists are inclined for a unique species, the first one.

But what is more important, under the horticultural point of view, is that, nowadays, we find in the market about one hundred of varieties, and that the number of lovers is increasing.

In 1967, in USA came to life the International Oleander Society, which edits, on a quarterly basis, a “Nerium News”, with an office also in Italy, at Collegno, by Turin; in 1996, it has been published the first book about oleanders, The handbook on oleanders, by Dr. Eggenberger; and in the Côte d’Azur, with the contribution of INRA, the Institut des Recherches Agronomiques of Sophia Antipolis, close to Antibes, and of botanist and dealers, they have created the “identity card” of the cultivars, nowadays very differentiated, like the roses.

So, we can choose rustic forms, such as ‘Soleil Levant’ or ‘Professeur Granel’, capable to resist, without major harms, to -10 °C, and spring up again, from the foot, at lower temperatures; odorous varieties such as ‘Géant des Batailles’, with the intense note of honey, which wraps up the gardens during the warmest hours of the day; dwarf varieties, like the ‘Angiolo Pucci’, which, instead of the usual 3-4 metres shrubs, forms compact bushes of 120 cm., or ‘Rosy Rey’, which does not overcome the 50 cm.; early varieties, like the ‘Mont Blanc’, ‘Sealy Pink’, ‘Tino poggi’ or ‘Angiolo Pucci’, which blossom almost one month before the normal forms, mostly in bud from the end of June to September, and therefore are suitable also for the northern climates, where the plants have difficulty to bloom, due to the lack of sun and of warmth; and varieties such as ‘Emile Sahut’, ‘Géant des Batailles’, ‘Mont Blanc’, ‘Tino Poggi’ and ‘Virginie’, which, in addition to their resistance to the drought, like all oleanders, blossom generally, without watering, also in the warm Mediterranean “natural gardens”, without any care.

The flowers, united in more or less thick racemes, depending on the variety and the energy of the plant, can be simple, with a corolla which opens in five lobes similar to petals; double, if a second order of “petals” appears superposed to the first one; and hyper-double, when all the stamens have more or less transformed in “petals”, and the flower, swollen, looks like a small rose.

And we go from the dark, velvety, red of ‘Emile Sahut’, variety unfortunately sensitive to the cold, to the immaculate white of ‘Mont Blanc’, through a rich range of colours: intense pink, pale pink, salmon pink, apricot pink, and cream, up to the canary yellow of ‘Souvenir des Îles Canaries’ or the deep yellow of ‘Marie Gambetta’.

The colour of the “petals”, often varies after the soil, and the “throats”, indented and arabesque, can be dye over dye, or in contrast, like the ‘Soleil Levant’ or ‘Angiolo Pucci’, which have a yellow heart; not to talk about the variegated flowers, white over red, like ‘Commandant Bartélemy’ or ‘Géant des Batailles’ ; of ‘Kewpie’, recent variety of the nursery Turner’s Gardenland of Corpus Christi, with variegated pink petals and run through by veins of deeper colour; or of forms such as ‘Rosy Rey’, born from a mutation of ‘Petite Pink’, with mixed colours, light pink and pink, on the same branch.

In spite of the fact that one leaf of oleander is so much toxic to kill, theoretically, an adult, for what we know, explains to me Jean Rey, the biggest producer of oleanders of the Côte d’Azur, with more than one million of pots per year, accidents never happened, because the juice of this plant is so sour, that it is spat immediately also by the kids.

So, besides the Mediterranean gardens, this species has made its way also on terraces and balconies, and even at home, as Germans and Dutchmen give it, as a present, in small pots, like the hydrangeas in flower, and succeed in having it lasting for several years, even without a veranda, sheltering it, in winter, in the cellar.

The oleanders accept whichever soil, acid and basic, well drained or with stagnations, fertile or poor, and prove to have seven lives.

Only true requirement: the sun.

In spring, they are, usually, to be settled at their place in the garden; and starting from a 3 litres pot, in two years, it will be easy to obtain 2 metres plants. The appearance depends on the “scissors”.

If we like shrubby structures, we have to leave the nature doing as it wishes, cutting off, in March, the two years old branches at the base, for an average structure, and at the height of 40 cm., for getting big bushes.

If we prefer the “saplings”, after having chosen a suitable species, like the ‘Géant des Batailles’ or ‘Mont Blanc’, we have to take off, since the beginning, all lateral shoots, until when the stem has reached the desired height. Then, we have to poll it, and we leave it to ramify, or we can utilize it as a graft carrier for less vigorous varieties, maybe dwarf, to create thick small bushes, just like a head of hair.

But also “intermediate pruning” do exist, which privilege, in the time, some scions, in very elegant structures, halfway between the shrub and the sapling.

In any case, Jean Rey continues, it is important not to effect this operation in autumn, as, in winter, the various healing get easily infected, and it is good to sterilize the tools with some alcohol between the cuts.

In large cities, like Paris and Milan, the oleanders, absolutely not disturbed by the pollution, take often advantage of the micro climates created by the house heatings, and can spend the winter in open air; but, where it’s cold, usually, the cultivation in pot is to be preferred, as it allows to shelter them in winter.

The smallest container is for 20 litres, but later, in order to get nice plants, they must be placed in pots for lemon trees, with a diameter of 40 cm., and more.

For strengthening the flowering, it is good practice to manure, in June, with produces rich of phosphorus and potassium, when the leaves have already developed and the buds are forming. Before, in fact, we would risk to encourage the growth of the foliage to the prejudice of the flowers.

Especially in balcony, in summer, it is important to water the roots; then , in October, we shall have to gradually reduce the administrations, and to stop them in November, when the pots are carried in unheated verandas, or at the shelter of a wall or a roof, covering, if it’s the case, the soil and the fragments, scattering over them, leaves, hay, or rags, which will protect the plant from the frost.

In order to get new varieties, with aimed cross breeding, we have to start from the seeds.

They come out, in autumn, from strange, long fruits, dehiscent, similar to pods, and exhibit a showy, frail pappus which is useful for the sowing.

In the wild, the seed falls down between the stones of the stream, and, with the spring rains, germinates, covered by the slime; in pot, it’s to be planted under, the grass, in March-April, at 18-20°C, just covered by a thin layer of sand.

Many watering are necessary and about one month of time, to see the small plants come out. Once isolated in 8 cm. containers, they will bloom, after several transplantations, in about 2-3 years.

The multiplication by cutting is faster and more convenient. We have to take off in June-July, from half-ripe sprouts, small 8-10 cm. branches, and we shall plant them in a mixture of sand and peat, in equal parts, to be kept always wet, at 20°-25°C.

Or, with our grandmothers’ method, we place tiny cuttings, in jugs or bottles full of water, and we inter them as soon as the roots come out.

The Achilles’ heel of the oleanders is the water on the leaves. When they are reached, systematically, by the automatic sprayers used for watering the grass, they grow up deformed, the flowers abort, and the fruits assume monstrous, tumorous forms. It is the most frequent disease caused by a bacterium.

It can be prevented with spraying of copper oxychloride in March, at the time of the vegetative revival, and when, unluckily, the disease is visible, the only remedy is to cut and burn the infected parts, plunging the scissors into the alcohol upon each cut, in order to avoid the diffusion of the contagion.

The humidity on the leaves can also encourage the growth of a fungus, the Ascochyta, which causes black dots on the laminae, and rottenness of the branches.

And, in spite of the toxicity of the plants, the animal parasites are not missing: scale insects, like the Diaspis pentagona, or the Aspidiotus hederae, to be fought with “white oils”, and vigorous winter brushes; red small spiders, which can develop
immoderately, during the drought periods, to be fought with special products; and the yellow aphids (Anuraphis nerii), usually easy to extirpate.

And for those loving the biologic struggle, and do not want to use poisons, nowadays, in the market, are available larvae of ladybirds, to be spread for chasing the aphids on the branches, and a precious hymenopter, the Prospaltella berlesei, hunter of the scale insects.