Night cacti: they bloom as soon as it darkens, and their flowers fall at dawn

We discover the cacti which bloom after the sunset, when the nocturnal butterflies which pollinate them do appear. How to grow them up at ours. 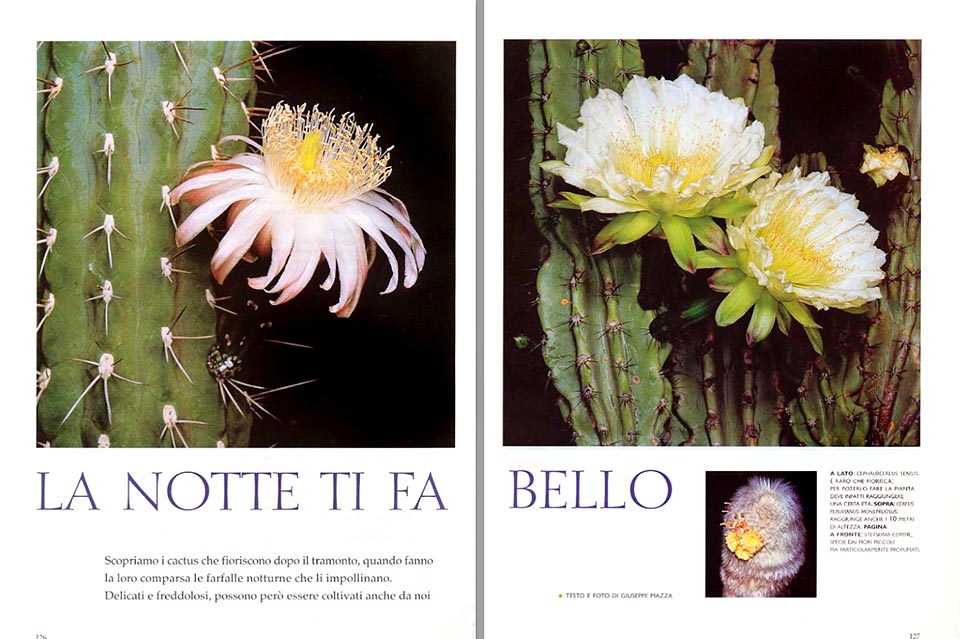 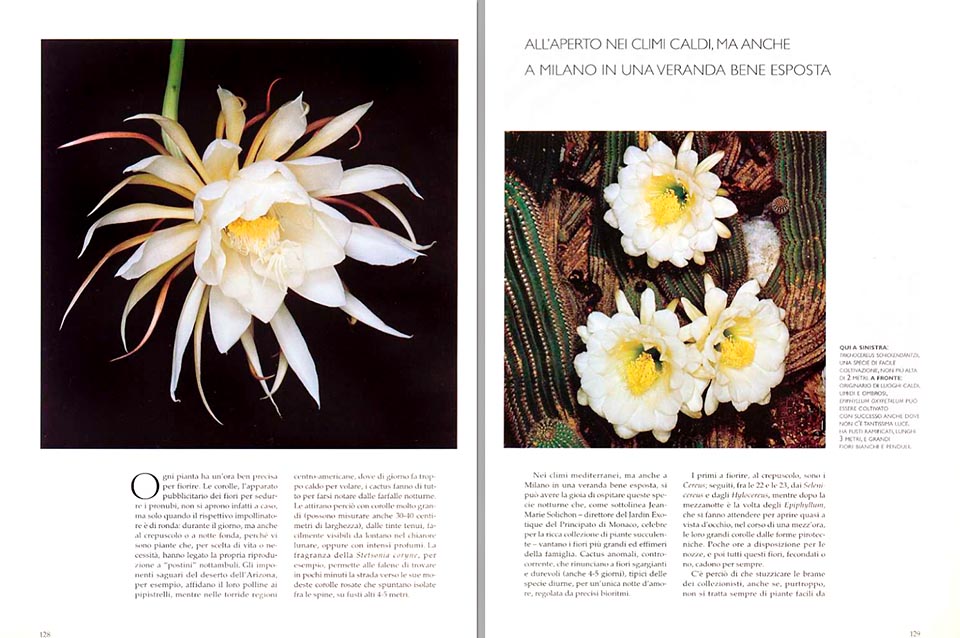 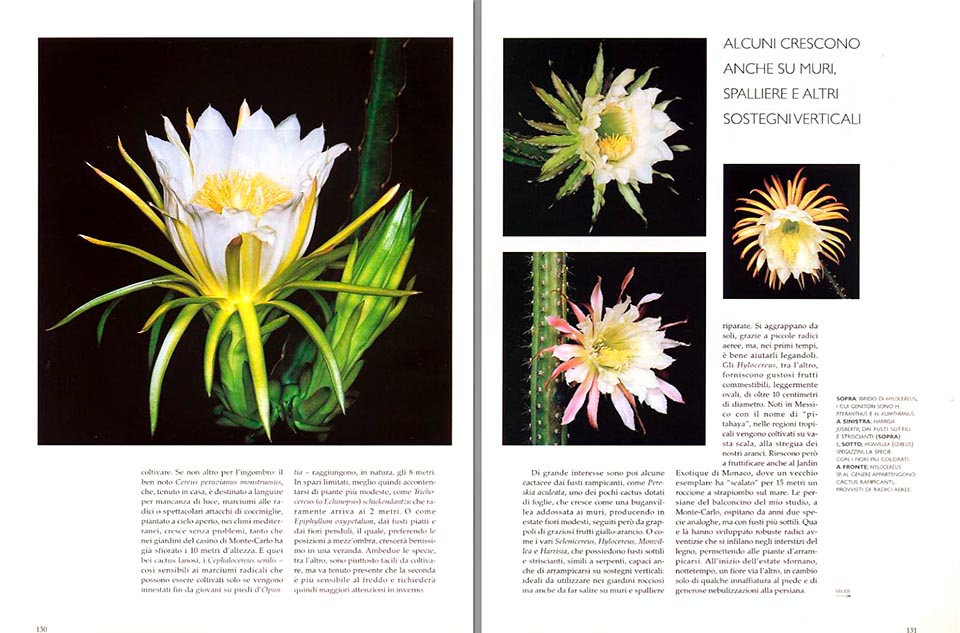 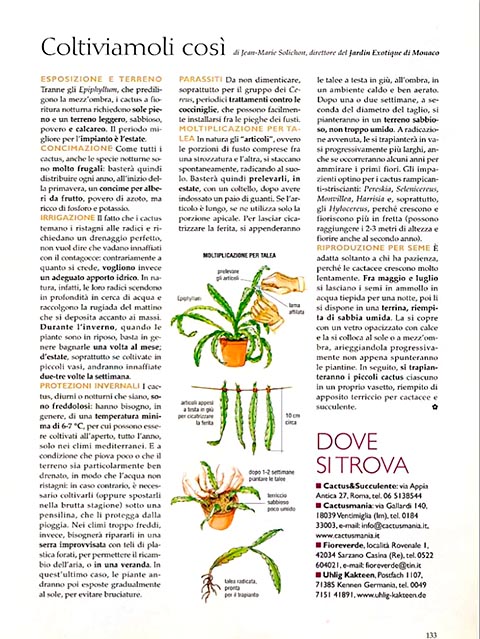 Each plant has its own time for blooming.

The corollas, advertising apparatus of the flowers for seducing the insects which pollinate them, in fact, do not open by chance, but only when the respective pollinator is going around. All the day round, if, as in most part of the cases, it is matter of diurnal insects, but also by the twilight, or by full night, when the “clients” are nocturnal, due to the life chosen, or for their necessity.

So, in the desert of Arizona, saguaros entrust their offspring to the bats; and in the torrid regions of Central America, where the day is too hot for flying, the cacti do all they can to be noticed by night butterflies.

Corollas generally white, wide even 30-40 cm, easily visible from far away under the moonlight, and, odd thing for cacti, intense scents.

The fragrance of the Stetsonia coryne thus enables the moths to find in a few minutes, by their sense of smell, the way towards its modest pinky petals, which rise, isolated, between the thorns, on 4-5 metres high stalks.

In our Mediterranean climates, but also in Milan, in a well exposed veranda, we can have the joy of giving hospitality to these plants, which, as emphasizes Jean-Marie Solichon, director of the renowned Jardin Exotique of the Principality of Monaco, have the largest and most ephemeral flowers of the family.

Anomalous cacti, counter current, which renounce to the typical showy corollas, which last even 4-5 days, opening during the most warm hours, when the sun reaches the zenith, for only one night of love governed by precise bio-rhythms.

The first to bloom, by dusk, are the Cereus; then, between 22 and 23 hours, the Selenicereus and the Hylocereus; and only after midnight, the Epiphyllum, which keep waiting for opening, almost at sight, in thirty minutes, their huge pyrotechnic corollas.

Few hours are available for the wedding, and then these flowers, fecundated or not, fall for ever.

There is enough material to excite the desires of the collectors, even if they are not always easy plants. First of all, the encumbrance.

The well known Cereus peruvianus monstruosus = Cereus hildmannianus, often sold in pots to be later thrown away, doomed to languish at home for lack of light, rottenness to the roots, or spectacular attacks of cochineals, has almost reached, in the gardens of the Casino of Monte Carlo, the height of 10 metres; and those nice woolly cacti, the Cephalocereus senilis, so much difficult to be cultivated, to be grafted since when young, on feet of Opuntia, can reach in nature the 8 m.

In limited spaces, better then to be contented of more modest plants, like the Trichocereus schickendantzii = Echinopsis schickendantzii, which seldom reaches the 2 metres, or the Epiphyllum oxypetalum, with flat stalks, similar to leaves, and relapsing flowers. Born for the positions in mid-shade, it will adapt very well in a veranda.

There is then a vast group of creepers. The Peruslia aculeata, a cactus with leaves and modest small flowers, which transform in bunches of charming yellow-orange small fruits (see photo), grows up like a bougainvillea tied to the walls; and well suitable for the rocky gardens are the Selenicereus, the Hylocereus, the Monvillea, and the Harrisia, with stalks, creeping or crawling like snakes.

The Hylocereus furnish also tasty edible fruits, slightly oval, of more than 10 cm of diameter. Known in Mexico with the name of pitahaya, they are cultivated in wide extent in the Tropics, like our oranges, and fructify also at the Jardin Exotique where anold ramified specimen has climbed, easily, for 15 metres, a big rock over-hanging the sea.

The bent shutters of the small balcony of my workroom, in Monte Carlo, give hospitality, since years, to two analogous species with thinner stalks. They have developed, here and there, some robust temporary roots, which slip into the openings of the wood and allow the plant to climb.

At the beginning of summer, they make a flower after the other, in exchange of some watering to the foot and generous nebulizations to the shutter.

As it applies to all cacti, but Epiphyllum, all these plants need a lot of sun, a light soil, sandy and calcareous, poor of nitrogen, seen that, Pereskia apart, they must not fabricate leaves, but rich of phosphorus and potassium.

Practically, Jean-Marie Solichon recommends, a fertilizer for fruit trees. And, contrary to what is thought, also an adequate quantity of water is needed.

The fact that cacti do not like stagnating water at their roots, and require a perfect drainage, does not imply that the must be watered with a dropper.

In winter, when they rest, generally one intervention per month is enough, but in summer, particularly when in small pots, in a sunny terrace, they must be watered at least 2-3 times a week.

In nature, the roots go down deeply, and in the strategic points, close to the rocks, they collect the morning dew; but when in a few centimetres small pot, dry and solid, they can quickly die for asphyxia.

The more sensitive varieties to cold, especially where it rains in wintertime, need a roof or a temporary greenhouse done with some plastic sheets, duly holed for the aeration. And the plants sheltered in a veranda, will be later on gradually exposed to the sun in order to avoid anti aesthetic burnings.

We must not forget, particularly for the group of the Cereus, periodical treatments against cochineals which can easily settle between the folds of the stems.

The seeds, after having been soaked for one night in warm water, are spread on wet sand, between May and July, at temperatures not lower than 21 °C, in a pan covered by a glass rendered opaque by some lime, which can be even left under the sun. But when the small plants appear, the place must be aired progressively.

Quicker and more advantageous, is the propagation by cutting. In nature, the small articulations of many species, such as the Hylocereus, separate spontaneously, making roots on the ground; and in culture it’s sufficient to take them off with a good pair of gloves and a blade, to have the wounds healed over, in the shade, in a warm and well ventilated place, hanging the stems head down, before of digging them after one or two weeks, depending on the diameter of the cut, in a sandy soil, not too much humid.

But you need a lot of patience for admiring the first flowers, often some years.

→ To appreciate the biodiversity within the family CACTACEAE, please click here.

Night cacti: they bloom as soon as it darkens, and their flowers fall at dawn was last modified: May 24th, 2019 by Giuseppe Mazza