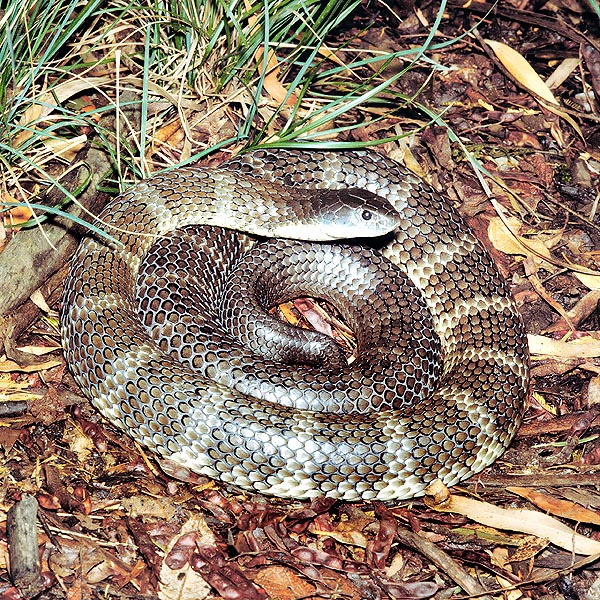 The genus Notechis includes quite a number of highly venomous species going under the common name of Australian tiger snakes, where the adjective Australian is bound to avoid mistakes with other species, such as the Old World catsnakes (Telescopus) moderately venomous and usually not dangerous for the man.

Storr has proposed to include into the genus Notechis also the Australian Lowland copperheads (Austrelaps superbus), serpents which, they too, carry the adjective indicating the continent where they live, in order to avoid confusions with the North American copperheads, which belong to the crotalids and not to the elapids, however, in this text I will treat exclusively about the common tiger snake of Australia.

The fearful Common Tiger snake (Notechis scutatus Peters, 186, famiglia (Elapidae) is present in a small part of Australia,and precisely in south-eastern Queensland, in the eastern part of New South Wales and in Victoria.

It is a robust serpent, usually about one metre long, but with reports of 2 metres, with the characteristic of being able to flatten the body for the whole of its length when irritated as well as, simply, for absorbing more heat when stretched out on a surface for heating (this characteristic is common to all the species, or subspecies, of tiger snakes). The head is short, with rounded muzzle, and, if seen from the top, appears rather sharp, but with blunt apex. The neck is poorly visible.

The colour is much variable, usually grey, or green-grey or olive, with paler transversal bands. The ventral surface is paler, usually yellowish, olive green or pale grey. The scales look like small overlapped and imbricate shields, from where comes the second part of the scientific name: scutatus, and are placed, by midbody, in 15-19 oblique rows. Depending on the size, the ventral scales may be 140 to 190, with single sub caudal ones.

It is a reptilian loving the humid soils, with presence of abundant water, meadows, edges of swamps and banks of watercourses and lakes. In particularly suitable locations several individuals may be found, almost grouped in relatively small areas, as extension, so as to give almost the impression that it is a “sociable” animal. Furthermore, it is not rare to find it in parks, gardens and golf courses, even in the big cities, for instance, in the outskirts of Melbourne.

Of diurnal and terrestrial habits, it ma, however, partially modify such habits and, in particular circumstances or habitats, it may become semi-nocturnal or crepuscular and climbing bushes and trees. A nocturnal activity is more common in periods characterized by warm climate, whilst, with the decrease of the temperature, it will rarely show up during the night. Its diet is formed chiefly of frogs, toads and tadpoles and this explains its preferences about the habitat, but it can predate mice and other small mammals, birds, lizards and even fishes. The reproduction is ovoviviparous, with “delivery” for alive young and perfectly formed (from 35 to 80) and the newborn measure about 12-15 cm.

Like most serpents (also those considered as the most aggressive), it prefers to avoid the confrontation with the man, and, if possible, it tries to vanish into the first available shelter, however, if surprised, cornered or provoked, it reveals very aggressive and ready to bite and the shot of the head, mouth open, is in this case, extremely rapid. Often, when molested, it assumes a threatening position, flattens the body and emits hissing sounds and, if the intruder does not withdraw, it tries to bite repeatedly and violently.

The venom of this species is neurotoxic and coagulant and only little cytotoxic, which results in a mainly paralyzing action which may involve the breathing muscles with resulting asphyxia, compounded by possibility of thrombosis, and in local symptoms of cytotoxic type which are not, however, so much pronounced as is the case of the venoms of many viperids and of the spitting cobras. The power of the venom is 4,25 times greater than that of the Indian spectacled cobra (Naja naja). Even if a polyvalent serum does exist, extremely useful when the species responsible of the bite is not precisely known, in case we are sure of the species, the specific monovalent serum is effective in smaller dosages (3.000 units), with lesser risks of anaphylactic reaction. 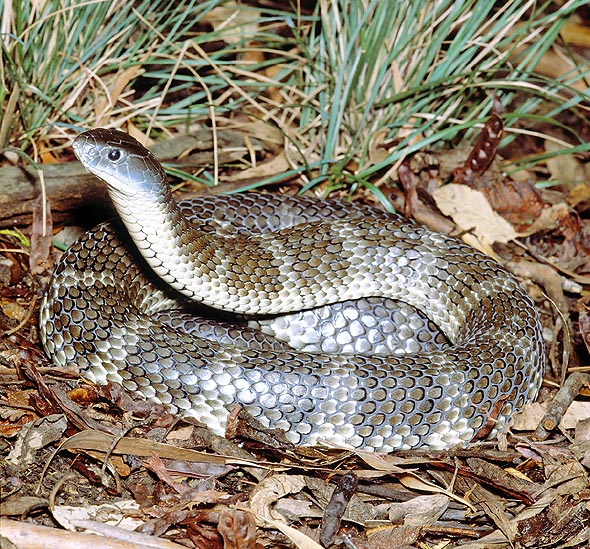 Short note about the serums for treating the Australian elapids bite

This appendix I have added is of general character and might match other species of the continent Australia-Oceania, actually I have matched it to the tiger snake simply because this is the first text on the Australian serpents I am writing and also because the tiger snake is one of the species which may create occasion of incident, for the fact that it frequents even thickly inhabited areas and for its irritability.

My intent is simply to clarify the utility of the serums, the differences between monovalent and polyvalent serums, matter which, among the laymen, seems to me it causes a certain confusion, and not only for what the Australian species are concerned.

In other words, is the serum useful? When is it to be administered? Who has to do so? Is it dangerous?

The matter would require much more than these few lines, however, I hope to be able to give an indication about the utilization of this valuable therapeutic aid. Australia is a special continent with an equally special fauna. For what the serpents are concerned, it has the unique characteristic of having more venomous species than harmless. The Australian venomous serpents belong all to the elapids (once the sea snakes were considered separately), but, also here, the continent provides some surprises. For instance, the three subspecies of death adder (Acantophis), even if resembling to some viperids, are elapids in all respects and have probably taken the place (called ecological niche) of the vipers and the crotalids in a country where they are absent.

Not all Australian elapids are dangerous in the same way, and therefore we go from the almost harmless Bandy-bandy (Vermicella multi fasciata, Vermicella annulata) to the extremely dangerous Taipan (Oxyuranus scutellatus), however the bites of serpent were, before the advent of the serums, an often fatal occurrence. Nowadays, Australia has a very low mortality rate caused by serpents, especially considering its richness in poisoners, and this is due to a series of factors: low population density, high efficiency of the medical structures, but also and mainly because of the production of the serums which have radically modified the prognosis, on the understanding that still nowadays a bite gotten in a zone distant from any assistance is a dramatic contingency.

Although the use of the serums is not to be done too lightly and requires medical knowledge, it is equally erroneous the belief of those who (physicians included, at times), think that the serum is always a mortal danger. In the case, especially, of bite of elapids and big viperids (dry-bites excluded), the serum is a real life saver, even if often other measures are necessary (assisted respiration, etc.).

In 1977, Sutherland performed a study on the allergic reactions, over a period of 15 years, in Australia and did not report any demise due to anaphylactic shock (this does not mean, in any case, that it may not happen), but it is imperative to have adrenalin handy and medical knowledge for fighting an anaphylactic reaction. Lesser serious allergic reactions are more common (serum sickness, for instance). I will not do, obviously, absolute statements, but these data refer to Australia and may differ for the other continents.

One of the reasons of the low impact of reactions reported in Australia stands, after some, in the modality of production of the serum, but, mainly, in the modality of milking the serpents. After an Australian author, the Australian elapids may be easier kept in captivity for years, and are milked with great care, unlike other species in other countries, and the impairment of the venom glands or of the tissues of the oral cavity are shown as one of the possible causes of contamination of the venom with cells and blood, thing which would increase, after the author, the risk of allergic reactions for the receiver.

Furthermore, the greater the purity of the produce is, minor are the risks of allergic reaction. The polyvalent serum, very useful when we are not sure of the species responsible of the bite, requires, as average, much greater doses than the specific monovalent serum and therefore, in Australia, when the species is sure, they prefer to utilize the last one, which needs fewer unities for getting the same effect. The polyvalent would more easily cause, therefore, anaphylactic reactions.

The serum against the venom of the tiger snakes was first synthesized around the 1929, that against the venom of the common taipan in 1955 and that for the death adder in 1959, whilst the polyvalent saw the light in 1962. Not very recent statistics reported about 200 bites per year treated with serum in Australia, but, whilst before 1929 the mortality rate was almost of the 50%, in 1976 it had fallen to 5 or 6 cases per year, in 1979 only one case of death (at least among the treated ones) was reported, and from 1978 to 1981 no deaths at all were known.