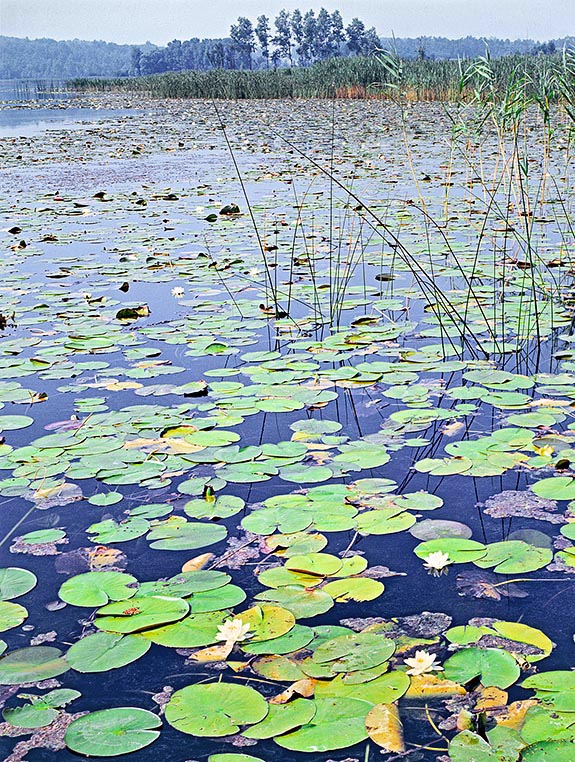 The name of the genus comes from the Latin “nymphae” = nymphs, deities who in the Latin mythology lived in the woods, seas, rivers and lakes; the specific name is the Latin term “alba” = white, with obvious reference.

The Nymphaea alba L. (1753) is a freshwater perennial herbaceous winter resting plant with ramified horizontal rhizome, rooted in the sediment of the bottom.

It has solitary leaves at the extremity of a long and flexible petiole run by channels where air is present to ensure the floating and the gassy exchanges between leaves and roots. The floating leaves, due to the presence of particular tissues where is present air in the intercellular spaces, are orbicular-cordiform of 10-25 cm of diameter with diverging lobes and entire margin, smooth, water repellent and of intense green colour above, reddish below. 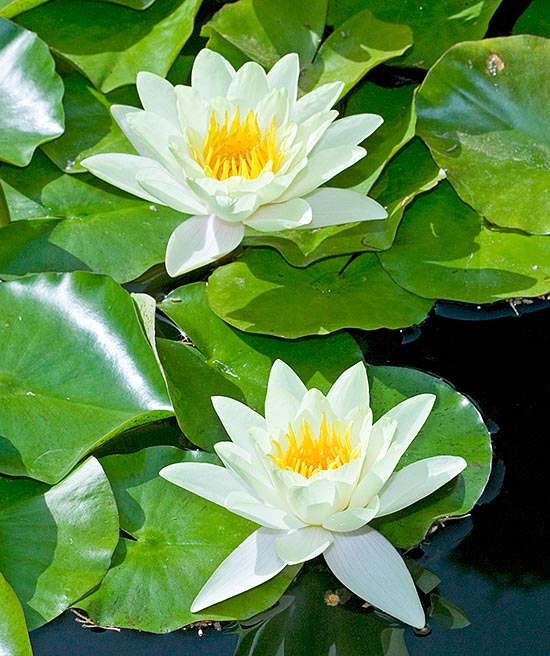 The splendid diurnal flowers, hermaphrodite, self-fertilizing, delicately scented and floating, have a diameter of 10-20 cm. The edible rhizomes and the leaves contain sedative substances © G. Mazza

At the end of flowering the peduncle immerses carrying the forming fruit to the bottom, where it completes its ripening. The fruits are semi globular, green, of 5 cm of diameter, containing several ellipsoid seeds about 3 mm long. The seeds initially float due to the presence of air in the aril (fleshy involucre totally or partly wrapping the seed), that favours their dispersion, until when this dissolves, impregnating of water, makes them deposit on the bottom. It reproduces by seed, that has an intrinsic dormancy that can be interrupted by cold stratification, keeping them immersed in water at a temperature around the 5 °C for 1-2 months, but more frequently by division of the rhizomes in spring.

Once very diffused species all over its origin range, it has progressively reduced in many zones due to the excessive anthropization. It requires full sun and preferably alkaline or neutral waters, even deep, up to 3 m, but can bear short dry periods, with the water level reduced to zero, in which case it produces aerial leaves of reduced size and on a short peduncle.

It can be cultivated, due to its ample distribution, practically in almost all climates.

The rhizomes, rich of starch, are edible, after having taken off the outer layer, and cooked for a long time, with change of water, to eliminate the toxic substances, but with a rather bitter taste, and were consumed in the past during the famine periods.

Rhizomes and leaves have been utilized in the popular medicine since the remote times, the plant contains several substances, among which the nymphaeine and the nupharine, with sedative properties, utilized in extremely low dosages because highly toxic, with effects on the nervous system that can be fatal.

Nymphaea alba was last modified: May 2nd, 2018 by Giuseppe Mazza