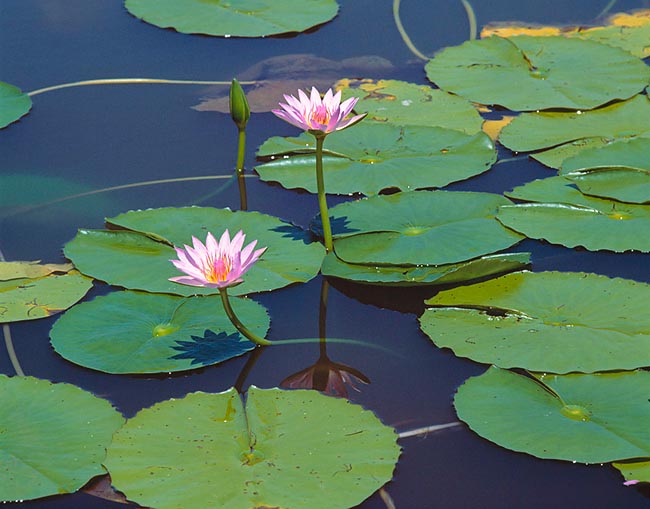 This species is native to Botswana, Kenya, Mozambique, Namibia, South Africa, Swaziland, Tanzania and Zambia, where it lives in lakes, ponds and swampy areas, usually in calm and little deep waters.

The name of the genus comes from the Latin “nymphae” = nymphs, divinities who, in the Latin mythology, lived in the woods, rivers and lakes; the Latin name of the species, “capensis” = of the Cape, refers to one of its origin countries.

The Nymphaea capensis Thunb. (1800) is an herbaceous, freshwater and perennial, plant, rather variable, with erect ovoid rhizome, not ramified, rooted into the bottom sediment.

It has floating, solitary, leaves at the extremity of a green robust petiole traversed by channels where air is present in order to ensure the floating and the gaseous exchanges between leaves and roots. The leaves are from ovate to orbicular, of about 10-30 cm of diameter, with wavy or slightly indented margin, smooth on the upper page, water-repellent and of green colour, suffused of brown below.

Flowers of about 10 cm of diameter emerging from the surface of the water, on a peduncle also provided with channels where air is present, with four green sepals with purplish margins, 12-24 petals long 4-6 cm, of lavender, bleu or purple colour, and numerous yellow stamina, shaded with the same colour as the petals towards the apex. 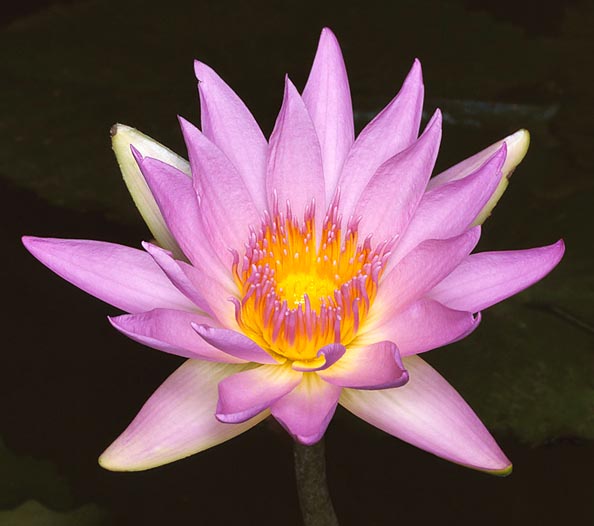 Unlike the other water lilies, the male and female organs ripe at the same time © Giuseppe Mazza

The flowers open in the morning and close late afternoon, usually for 3-4 consecutive days; unlike other species of Nymphaea, they are self-fertile (the male organs and the female ones ripe at the same time).

The flowers are pollinated by insects, mainly bees. By the end of the blooming, the peduncle dips carrying the forming fruit to the bottom, where it completes the ripening.

It reproduces by seed in spring-summer, covered by a thin layer of soil and some centimetre of water, in full sun; the germination takes place in 3-4 weeks, after that the first leaves have appeared, the transplant is to be done into single containers and then they are dipped into the water.

It is a much diffused species, due to its ornamental characteristics, of which several varieties have been selected, for colour and size of the flowers, and which has originated numerous hybrids.

It is cultivable in the tropical and subtropical zones and, marginally, in the warm temperate, where it can be left planted if the temperature of the water does not go below the 10 °C, elsewhere, the plants may be conserved from autumn to spring in a protected environment, at the temperature of 12-16 °C.

It requires full sun, water preferably little acidic or neutral and a substratum rich of organic substance which may be formed by a layer of garden earth, a layer of dung and one of gravel as cover.