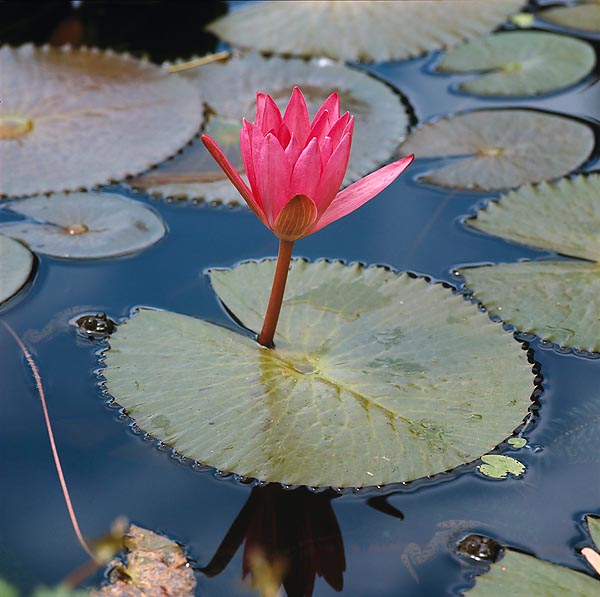 The species is native to Bangladesh and India (Andhra Pradesh, Assam, Bihar, Madhya Pradesh, Tamil Nadu and West Bengal), where is present in ponds, little deep lakes and swamps in 0,2-1 m deep waters.

The name of the genus comes from the Latin “nymphae” = nymphs, divinities who, in the Latin mythology, lived in the woods, seas, rivers and lakes; the Latin name of the species, “rubra” = red, refers to the colour of its flowers.

The Nymphaea rubra Roxb. ex Andrews (1808) is a freshwater perennial herbaceous plant with erect rhizome, rooted into the sediment of the bottom, which produces thin stolons.

It has solitary leaves at the extremity of a robust pubescent petiole, of 1,5 cm of diameter, Traversed at the centre by 6-7 main channels, surrounded by other smaller ones, where the air is present, in order to ensure the flotation and the gaseous exchanges between leaves and roots.

The leaves are peltate (with the petiole inserted almost at the centre of the lamina), ovate, with slightly waved indented margins, of 20-40 cm of diameter, smooth on the upper page, water-repellent, initially of dark red colour then turning to the olive green with the age, pubescent below, floating or little raised with respect to the surface; the submerged leaves are sagittate or cordate of reddish colour.

The flowers, of about 15 cm of diameter, are solitary, over the surface of the water, on a peduncle also provided with channels where air is present, with 4 papery sepals, oblong-lanceolate with blunt apex, of an intense red colour, 16-28 petals from elliptic to oblanceolate, 4-6 cm long, purple red, and 60-90 stamina, 3-5 cm long, of red colour. The flowers, lightly perfumed, opening during the night and closing in the morning for four consecutive nights, have the phenomenon of the proterogyny, the stigma is receptive only during the first day, whilst the pollen is released in the following days, thus inhibiting the self-fecundation and helping the crossed one. Once the flowering is ended, the peduncle wraps spirally on itself, carrying the forming fruit to the bottom, where it complete its ripening.

The fruits are globose berries of greenish brown colour with the persistent traces of sepals and petals, of 4-6 cm of diameter, containing numerous blackish ellipsoid or globular seeds, 1,8 mm long, with a spongy aril. Initially, the seeds float due to the presence of air into the aril (fleshy involucre wrapping totally or partially the seed), what encourages its dispersion, till when this does not decay, soaking of water, and thus depositing them on the bottom.

It reproduces by seed, and, quite easily, by division. It requires full sun, calm or slightly moving waters, weakly acidic or alkaline (pH between 6 and 8), high temperatures, around the 30 °C in order to get the best flowering, and a substratum rich of organic substance which may be formed by a layer of garden earth, a layer of dung and one of gravel as cover. It is a species cultivable in the tropical and subtropical climate zones, where it blooms practically with continuity, and, marginally, warm temperate; elsewhere, the plants may be conserved from autumn to spring in a protected environment, at the temperature of 18-20 °C.

It is much appreciated in aquariophily for the submerged ornamental leaves it produces continuously in presence of high luminosity, paying attention to remove the emerging leaves. The young leaves and the stems are locally consumed as vegetable.