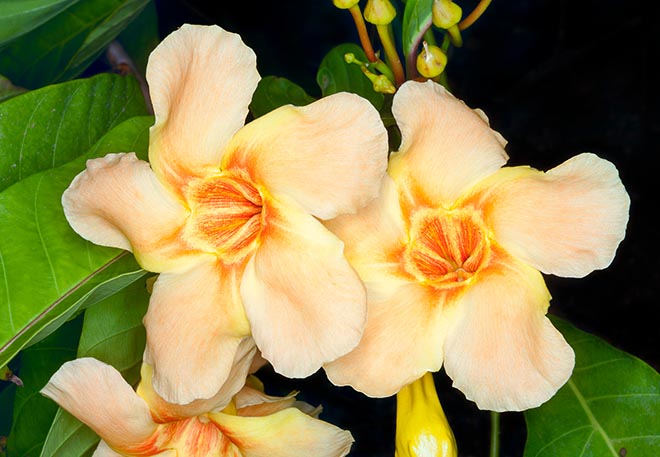 The name of the genus comes from the combination of the Greek terms “odonthos” = tooth and “adén” = gland, with reference to the five toothed glands under the ovary, the name of the species from “makros” = big and “anthos” = flower, with obvious reference.

The Odontadenia macrantha (Roem. & Schult.) Markgr. (1937) is a woody evergreen climbing species with cylindrical stems which elongates up to 6 m and more, and leaves, on an about 2 cm long petiole, opposite oblong-elliptic, 7-22 cm long and 4-10 cm broad, of glossy green colour, ending in a long pointed apex. The inflorescences, on a 4-8 cm long peduncle, are axillary panicles irregularly ramified, 10-12 cm long, carrying numerous flowers with funnel-shaped corolla with 5 lobes, 3-6 cm long and of 6-10 cm of diameter, with colour going from the cream yellow to the apricot with orange hues, which emanate a strong smell considered by some as little pleasant; it flowers during the dry season and by the beginning of the rainy one. The fruits, in pair, are oblong-ellipsoid follicles, up to about 20 cm long and 6 cm broad, containing several fusiform seeds, about 3 cm long, with at their extremity a tuft of numerous white silky hairs (pappus), about 5-7 cm long, which have the function of facilitating their dispersion by means of the wind. White latex exudes from the cuts on all parts of the plant. It reproduces by seed, which rarely produces outside the origin zones, by layering and semi-woody cutting in sandy soils kept constantly humid at a temperature of 26-28 °C.

Vigorous and fast growing climber, relatively little cultivated, in spite of the beauty of the flowers and the decorative foliage, maybe because it results rather difficult to be propagated by cutting, cultivable in full sun or slight shade exclusively in the zones with tropical and subtropical climate, as it does not stand temperature close to 0 °C. It is not particular about the soil, provided the same is draining, it well bears the prunings and, besides as climber, on railings and pergolas, it can be grown as a shrub. Cultivable also in pot, in soil rich of organic substance with addition of sand or perlite for improving the drainage, placed in winter, if the permanence outside is not possible due to climate factors, in a very luminous location with lowest temperatures not under the 14 °C, the waterings in summer must be regular and abundant, reduced, but without allowing the substratum to dry up completely, in winter.