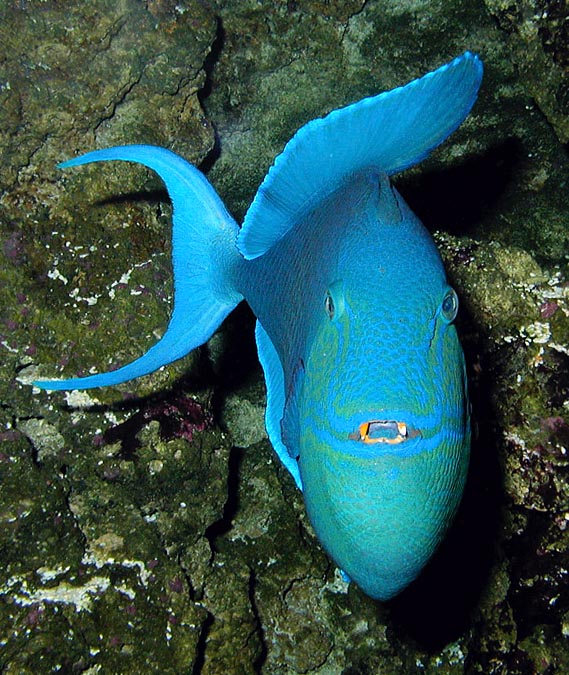 The unusual Red-toothed triggerfish or Blue triggerfish (Odonus niger Rüppell, 1836) belongs to the class of Actinopterygii, the ray-finned fishes, to the order of Tetraodontiformes and to the family of the Balistidae, the so-called triggerfishes.

The name of the genus comes from the Greek “odous” = tooth and “onos” = ass. That is, a fish with ass-like teeth; a tribute to the robust sharp teeth with which it cuts the sponges and does not hesitate, if menaced, to bite.

The name of the species comes from the Latin “niger” = black, due to its dark colour, violaceous-blue, which, in the semidarkness of the seabed appears almost as black.

It is at home in the tropical waters of the Indian and Pacific Oceans. We find it, as an indication, along the whole African coast, from South Africa and Madagascar up to the Red Sea and the Arabian Sea, in the Seychelles Islands, Mauritius, Réunion, Maldives, India, Sri Lanka, Thailand, Malaysia, Christmas Island, Australia, Indonesia, New Guinea, Micronesia, Philippines, Taiwan and China up to southern Japan. Eastwards, it has colonized Kiribati, Samoa and the Marquesas Islands. Southwards, it reaches the New Caledonia and Tonga.

It lives in the madreporic formations between the 4 and the 40 m of depth, usually on the outer side of the reefs in the heart of the currents rich of zooplankton, where it often nourishes in schools exhibiting and exceptional swimming ability. In case of danger and for spending the night it however gets closer to the coast taking shelter in the crevices of the rocks and between the madrepores.

The red-toothed triggerfish may reach the 50 cm, but usually, especially in an aquarium, does not exceed the 30 cm. The body is flat, protected as is the case of all triggerfishes, by a solid coating of bony scales, and the eyes, placed up on the head, are independent from each other in the movements granting an all over vision. 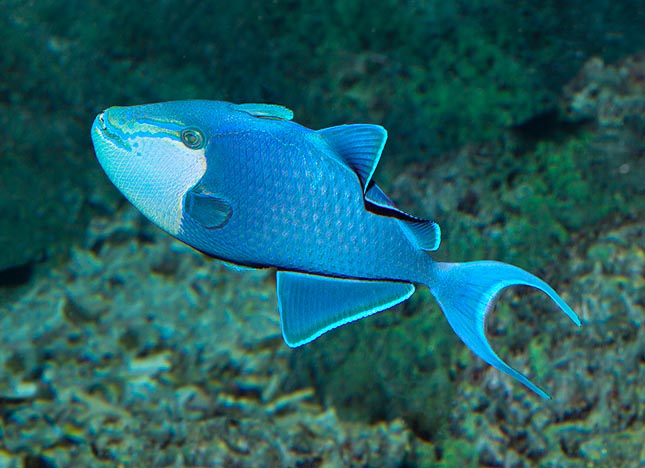 At first in the seabed gloom it looks black, but lighted it shows unexpected colors © Giuseppe Mazza

On the back we note the typical erectile trigger formed by three spines. It is often folded in an appropriate casing, but the fish may snap and lock it, for menace or for defence, in an erect position. Even if less evident than in other triggerfishes it however carries on a deterrent function against the predators, as it keeps open also when dead, causing injuries to whoever swallows it.

The mouth is robust, armed by solid incisors which grow up again in the event of breakage. At the beginning they are white, but then they get a reddish tint, hence the well known English name of “Red-toothed triggerfish”. They are useful for nibbling the sponges as well as for defence with deep bites.

The livery is a mix of blue, violet, green and turquoise, depending on the zone, the age, the mood of the fish, but mainly the illumination. The throat is in any case paler with a bright blue hatching becoming continuous around the lips and then starting again up with two parallel lines reaching the eye. This one, well camouflaged, is placed practically in the middle between the two zones of colour. The body shows a very decorative granular relief and the fins have an elegant pale fine edge. 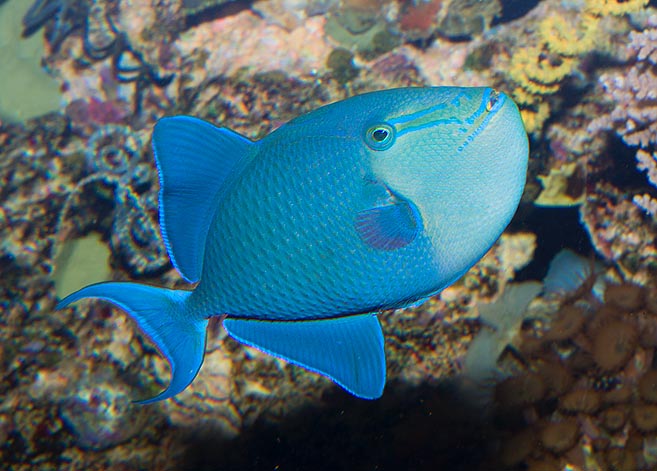 Due to its splendid blue, violet, green and turquoise livery is coveted by aquarists © Giuseppe Mazza

Therefore, it is not astonishing the fact that the blue triggerfish is a frequent guest of the aquaria, where it lives for long time is the sizes of the pool are adequate and the parameters of the water are right.

It nourishes of zooplankton and sponges, but probably also of small crustaceans, so much that in nature it often inspects the rocks and, in aquarium, eats them quite merrily.

The eggs are spawned in a nest, dug in the sand, where the fecundation takes place.

The young, after the larval stages, grow up, like many species, in the crevices of the madrepores.

The blue triggerfish gets often caught in the nets of the fishermen and is consumed fresh or dried up.

Then there is the hunting for the young for the domestic aquaria, and even if presently it is not an endangered species, it is by sure to be kept under control.

Theoretically, the populations might double in 1,4-4,4 years, but the vulnerability index has already increased to 39 on a scale of 100.