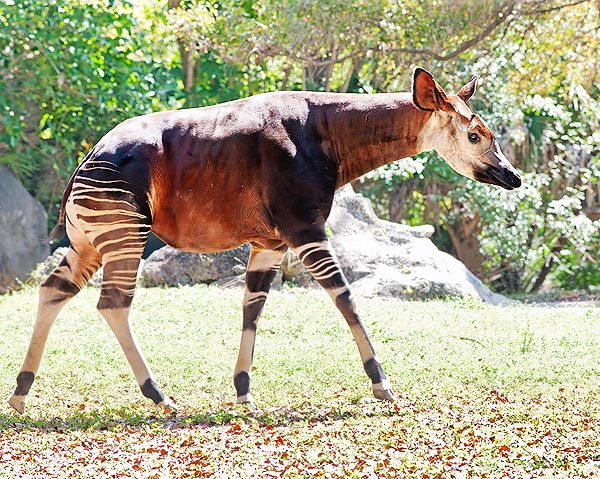 A bit horse, a bit zebra and a bit giraffe, Okapia johnstoni is a living fossil © Giuseppe Mazza

It seemed quite impossible that animals of such a size and with so much outstanding characteristics like the Okapi (Okapia johnstoni Sclater, 1901), could have remained unknown to the official science until the beginning of the XX century; and yet, the discovery of this very much interesting giraffid, as this is the case, dates back to the early twentieth century.

The circumstances determining it are very close to the fiction, almost at the level of the wonderful Emilio Salgari’s stories; for a long time, this animal, of which there were only news from accounts made by the African tribal populations, belonged to that biological discipline, often very close to the fantasy, which is the cryptozoology, founded by the Belgian biologist Dr. Bernard Heuvelmans.

The emersion of this species from the cryptozoological lists, where it was accompanied by the big foot, the yeti, Nessie and the Leviathan, was made by the zoological and ethnological biologist Sir Henry Stanley, to whom should be at least recognized the merit of having mentioned, the first, the okapi, in his famous book “In the darkest Africa”; as a matter of fact, this scientist, in the chapter dedicated to the Bambutis, a group of Congolese pygmies, tells of having learnt about the existence of an “Atti”, term which, in the Bambutis’ language sounds like “ass” or “zebra”, living deep in the pluvial forest and which, at times, ran in the traps utilized by them during their hunting trips.

Intrigued by this description, being he too a zoological biologist, and therefore knowing that wild asses as well as zebras absolutely avoid to enter the forest, Dr. Harry Johnston deduced that, if this was the case, in that region of still virgin forests there had to be a new species of equids, suited to forest life; proposed therefore to clarify personally the matter, as soon as possible, leaving for Africa in an expedition. 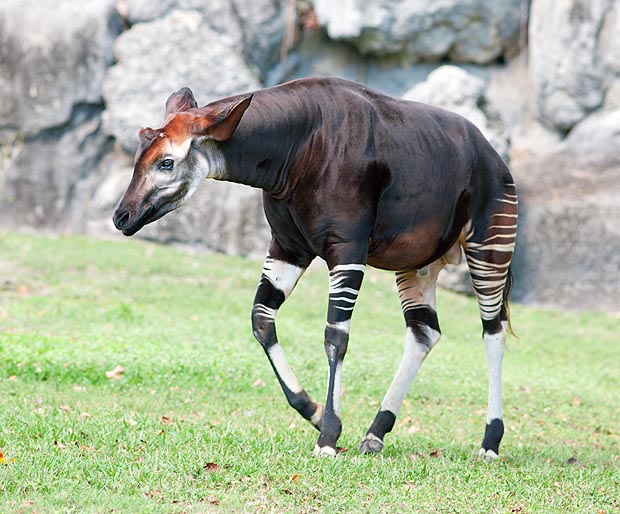 Discovered in 1901 only, surely has an old-times look, with very limited distribution © Giuseppe Mazza

After having reached Congo and having started the researches in 1900, in a letter dated “Fort Portal, Toru, Uganda, August 21st”, and addressed to the London Zoological Society, on the same year, he expressed himself as follows:

“When I was able to converse with the members of tribe of Bambuto Pygmies, they were explicit, when I asked them clarifications about this animal; they said, in fact, That they called it Okapi and gave me also this description: The upper part of the body has the same dark brown colour as the humid soil, whilst the belly and the legs are striated of white; once I finally arrived at the Belgian outpost of Mbeni, I did put many questions to my guide, who admitted that without any doubt such an animal did exist, indeed, he promised me to take me to a place where it should have been possible for me to seize one specimen of it; furthermore, from the Belgians, I learnt that the head of the Okapi was much elongated, especially in correspondence to the muzzle. I did hope also that in the village, as they have ensured me, I might find a skin of the animal, but then I was disappointed in learning that this one, if even had existed, had been destroyed for making belts and bandoliers; luckily, we were able to find still a pair of pieces big enough, which, by the first opportunity, I will despatch to you. It is sure, however, that, of whatever animal is the matter, it is not any of the known species of zebras, neither of a wild ass, even if the shreds of skin, unfortunately, belong to the legs or to the belly as they are striated. It was not possible for us, however, during our short stay in the region, to meet a specimen of okapi, however an officer of the Congo Free State promised to let me have a complete skin and a skull of this animal.”

The two stripes of skin, more than one metre long and a twenty centimetres broad, made in such a way to be attached at the belt at one extremity and fringed at the other, were presented at the December meeting of the London Zoological Society, by the zoological biologist Dr. Sclater, who, by that time, advised that was to be treated as the unmistakable evidence of the existence of a new species of “zebra”, which he proposed to call Equus johnstoni, in honour to the biologist explorer who had discovered the same. 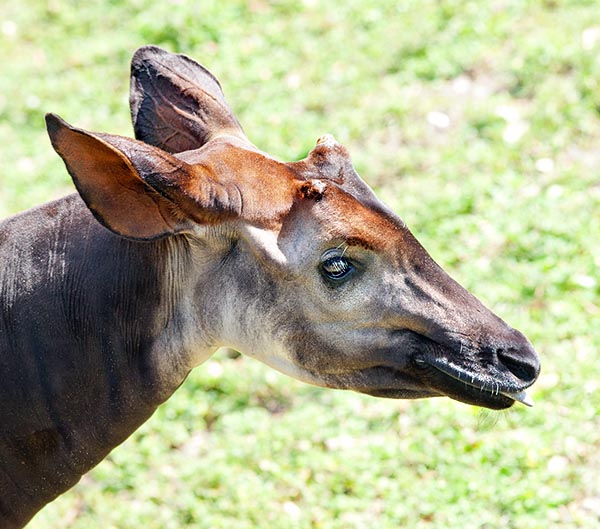 Horns are much smaller than the giraffe. The tongue is extroflexible and prehensile © Giuseppe Mazza

Finally, by the end of the following year, another zoological biologist, the Lankaster, received a complete skin and two skulls of okapi and so it was possible to establish of what animal it was really matter and to give it the name which is still now applied: Okapia johnstoni.

Later on, it was possible to seize some specimens of this rare giraffid alive and the biologists were even able, even if after many unsuccessful attempts, to obtain its acclimatization in the zoological gardens, like that of London and Amsterdam.

To date, the Okapia johnstoni, order Artiodactyla, is considered as a veritable “living fossil” by the scientific zoological community, seen that during the last 20 million of years it has not changed at all its structure.

The geographical distribution is much limited, so much that the zoological biologist Lang, the scientist who led the first American expedition, with the purpose to catch some alive individuals, so wrote: “It lives uniquely in a strip of land, long not more than seven hundred miles and hundred forty broad, placed at about seven hundred miles far from both the African coasts.” In reality, biogeographically, its distribution area is much more restricted, seen that this giraffid lives only in the tropical forests of north-eastern Congo and not far away from the boundary with Uganda; in particular, in a territory included between the rivers Ituri and Uelle, still today covered by impenetrable forests.

After having been discovered, the okapi, which already by itself did not have a numerous population, risked the extinction, due to the catches for commercial purposes (for the usage of the skin or for being sold to western zoological gardens), whilst they ware hunted by the local natives, who nourished of their meats and utilized their skins for their clothes, no more than what they ware doing with other herbivores. Nowadays, the species is protected, and its killing is a crime. 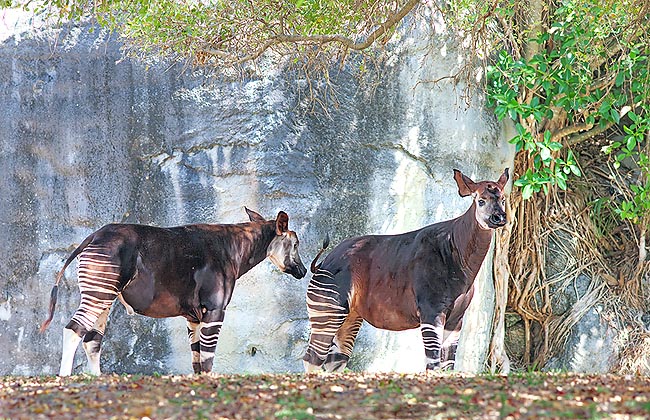 Shy, reserved, isolated, lives in the forest. In the mating time it’s the females to call the males © Giuseppe Mazza

Distribution area limited to a restricted zone of the Congolese pluvial forests.

The alimentation of the okapi is composed by buds, leaves and sprouts which they are able to catch with their long tongue, whilst, on the soil, they eat fungi, grasses, ferns and fruits. The animal nourishes during the day as well as the night.

It has the size of a horse and the somatic characters intermediate between those of a horse, a zebra and a giraffe (as a matter of fact, it is also colloquially called, horse of the Pygmies, tribal population of Congo). These characteristics, intermediate between these two different genera have confused the scientific community for years, leading the same to think that it had to be a biological hybrid. But later analyses of the DNA have shown its characteristics as a species, belonging to the family of the Giraffidae. It has a neck much less long than that of the Giraffe (Giraffa camelopardalis) though it is able, by utilizing an extro-flexible and prehensile tongue, to reach branches even at a height of 3 metres. Correspondingly, it has a greater head, with two well developed pinnae and a pair of small horns (smaller than those of the giraffes), of bony nature, covered by an almost invisible corneous and caduceus case.

It has a more elongated muzzle, a short and glossy mantle, of reddish-black colour, having striations with horizontal white bands of irregular width (zebra-like) on the limbs (fore and hind) on the back quarters. It has a white dot on the muzzle and on the parietal-occipital portion of the skull. It may be 1,5 m tall and weigh 250 kg; the females are rather bigger than the males. Though being a giraffe, it has a less robust trunk and less bent backwards (its morphology is closer to that of a horse or a zebra), has a tail which may be 40 cm long, ending in a tuft. The senses of smell and of hearing are well developed, the sight, less. 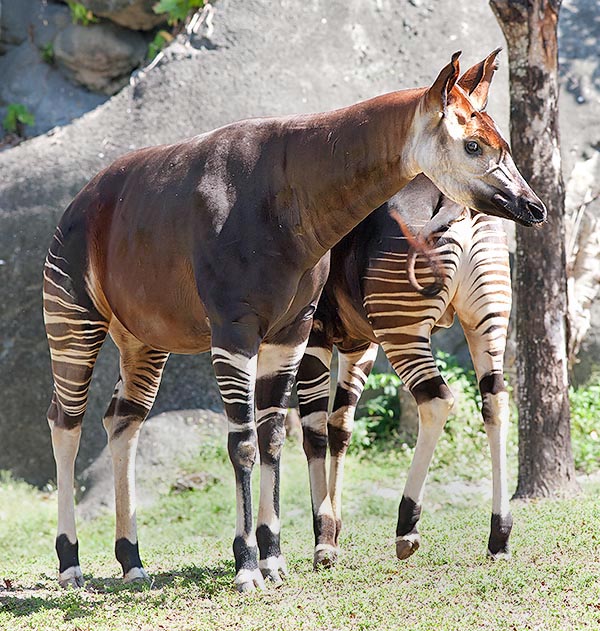 Animal of reserved, shy and solitary nature, not easily observable, it tends to live into the pluvial forest of its specific distribution area.

Usually, they meet specimens of the opposite sex only during the reproductive season, and groups of even three individuals may take form.

During the courting, it’s the females who call the males, with a low timbre sound which resonates inside the thick vegetation. The mating happens usually between May and June and between November and December.

The female has an average gestation period of about 14 months (420-460 days). Always, only one young comes to life, this may be nursed for a period varying from 7 to 10 months, and then is weaned. The horns appear by about one year from the birth and the completion of the development (sexual maturity) is reached by the 4-5 years of age.

Presently, after the great decrease happened between the 1960 and the 1980, the number of individuals of Okapia johnstoni fluctuates between the 5.000-6.000 units only, which is why the IUCN considers this species as highly vulnerable; the census is complicated also by the fact that they are animals much reserved living in the deep of the forest, partly even now not yet explored, where they cannot be easily observed.