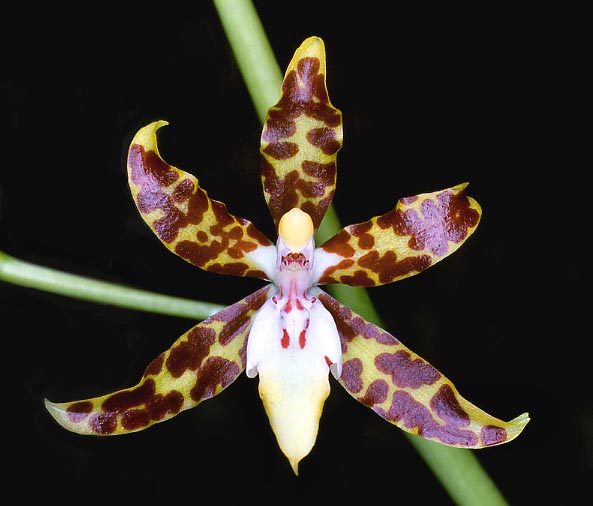 Oncidium maculatum close-up. The inflorescences can even reach the metre © Giuseppe Mazza

The species is native to Belize, Costa Rica, El Salvador, Guatemala, Honduras, Mexico and Nicaragua, where it grows in the forests between the 1000 and the 2000 m of altitude.

The name of the genus comes from the Greek “onkos” = tumour, mass, with reference to the small fleshy excrescence at the base of the labellum of many species belonging to the genus; the name of the species is the Latin adjective, “maculatus,a,um” = spotted, with obvious reference.

Inflorescences from the base of the pseudobulb, erect, up to about 1 m long, carrying several waxy flowers, perfumed, of 4-5 cm of diameter, with greenish yellow sepals and petals with wide spots of brown red colour and white labellum shaded of greenish yellow towards the apex. Sepals and petals are similar, elliptic-lanceolate with retroflexed pointed apex, 1,5-3 cm long and 0,5-1 cm broad, trilobed labellum, about 2,5 cm long with lateral curved lobes and oblong median lobe with at the base two close keels and two small horns at the sides spotted of purple red. It reproduces by seed, in vitro, and by division with each section provided with at least 3-4 pseudobulbs.

Much ornamental species with pleasantly scented flowers and long-lasting, 4 weeks about, it requires high luminosity, but not direct sun, and medium temperatures, with winter night lows around 12-14 °C and summer tops preferably not exceeding the 28-30 °C, high humidity, 60-70% and a good ventilation.

During the growing time of the pseudobulbs, the waterings must be regular, but allowing to dry up almost completely before giving water again, reduced in winter in way to grant a slight resting period till when the new vegetation appears; nebulisations are to be regularly distributed all over the year.

Waterings and nebulisations are to be done with rain water, or with water obtained by reverse osmosis or demineralised, and the fertilizations, during the vegetative period, with hydro-soluble balanced products, with microelements, at half of the dosage suggested on the package, distributed and alternated in way to avoid salts accumulation at the roots.

It can be mounted on bark or cork raft, or cultivated in pot with a draining and aerated compost, this can be formed by medium sliced bark fragments and charcoal; repottings and divisions are to be done by the vegetative re-growth.