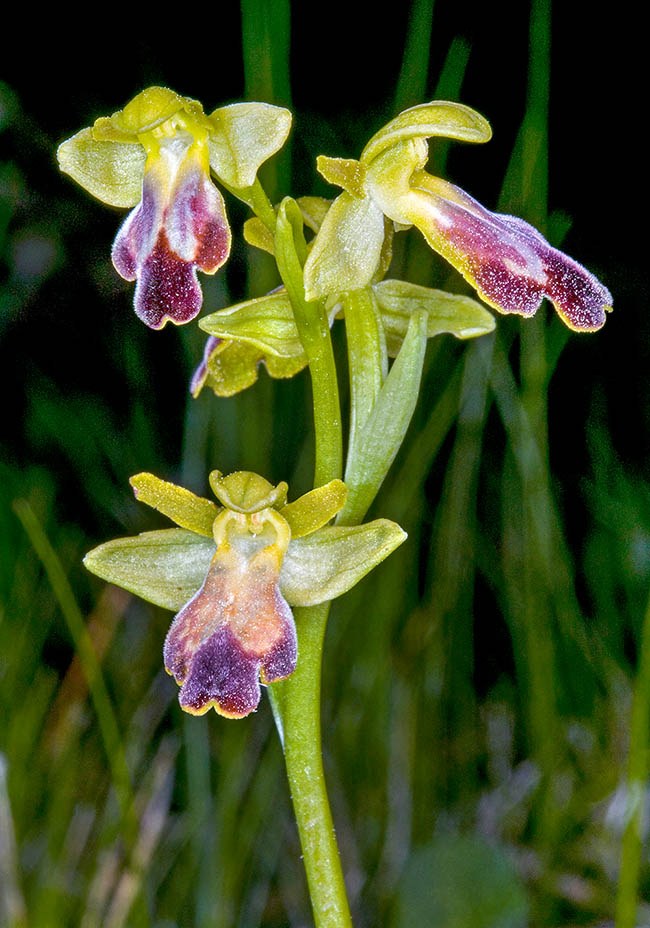 Ophrys fusca is a terrestrial species belonging to the family of Orchidaceae, described by the German botanist Johann Heinrich Friedrich Link in 1799.

The name of the genus Ophrys, described by Linnaeus in 1753, comes from the old Greek “ὀφρύς” (ophrýs), eyebrow, due to the presence of a certain hairiness on the labellum, whilst the specific epithet fusca refers, from the Latin “fuscus”, murky, to the dark colour of the labellum.

However, this raxon has been object of numerous vicissitudes from a nomenclatural and taxonomic point of view, as it presents a remarkable morphological variety that has led to the description of numerous specific and intraspecific entities more or less differentiated from each other, and variously interpreted by the different Authors.

Nowadays, many botanists prefer to consider the typical O. fusca subsp. fusca exclusive to the Iberian Peninsula and in particular to Portugal and to southern Spain where the species has been initially identified by Link, by referring instead the populations of different geographic areas to other subspecies or similar taxa.

It is a bulbous herbaceous plant rather puny and of small size (10-30 cm), characterized by amply lanceolate basal leaves and arranged in rosette, whilst the cauline leaves are few (1-2) and wrap the stem.

The more or less dense summital inflorescence, formed by 2-8 flowers relatively large with greenish sepals and rounded apex, the median being curved on the gynostemium. 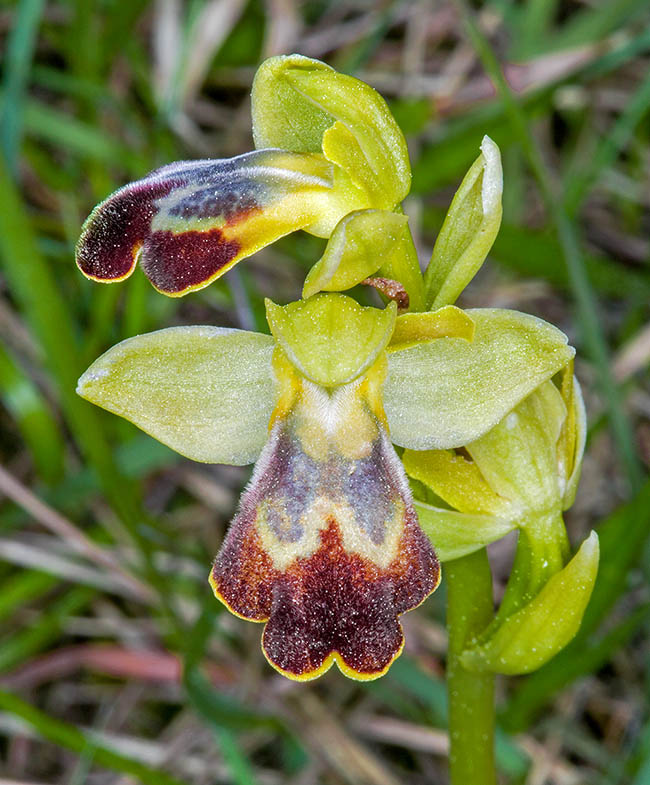 Present from the sea level up to 1500 m of altitude, is early flowering, between January and May © Giuseppe Mazza

The petals are narrower and slightly shorter than the sepals, usually of yellow or brown colour, with obtuse apex and wavy margin.

The labellum is brownish, trilobed towards the apex with little folded lobes (the median slightly convex), with glabrous margins of yellowish colour; the central part is covered by a thick dark velvety hairiness with a bilunulate lead grey or bluish macula.

The stigmatic cavity is fairly large, equipped with a whitish hairiness, that extends in the median sulcus up to the centre of the macula; the stamens and the pistil form a short and obtuse gynostemium.

The reproduction takes place thanks to the entomophilic pollination done by hymenopterans of the genus Andrena.

The fruit is a capsule containing several seeds having no endosperm that can develop only after having been infected by the spores of mycorrhizal fungi.

Flowering is generally early, starting in some areas already from the month of January to continue, depending on the altitude and the geographic area, up to May.

The ecology of the plant is quite similar to that of the other species of the genus Ophrys, loving open surfaces, such as pastures, wood clearings, garrigues and meadows from the sea level up to 1500 m of altitude.