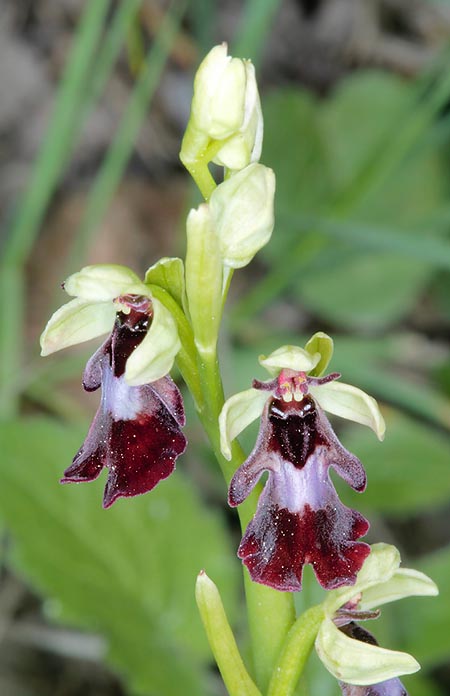 The Ophrys insectifera has a vast European distribution © Giuseppe Mazza

The Ophrys insectifera L. (1753) is a wild orchid growing in the lawns, meadows and grassy clearings of almost all Europe.

It has two underground tubercles, on whose tops start several adventitious roots, surmounted by a rosette of elliptical leaves.

By spring, it develops a green stem, 20 to 50 cm tall, carrying a loose cluster of 2 to 10 small flowers carried by their ovary.

The flower is formed by 3 elliptical green sepals, 2 very small and thin upper petals, of red-black colour, and by a labellum (lower petal), hairy, quadri-lobed, of dark wine red colour at times edged by yellow, and on which centre appears a greyish macula (glabrous and bright dot).

The flowers are obligatory entomogamous, and when fecundated produce a fruit on which develop thousands of small grains devoid of reserves.

The germination is possible only thanks to the presence in the ground of mycorrhizal fungi which will remain in symbiosis with the plant all along its life (several years, even one or two decennia).

This is the first Ophrys described by Linnaeus in 1753 in his famous opus “Species Plantarum” (first edition). It is also the only species of Ophrys having a wholly European distribution, being the others centred in the Mediterranean Basin (from Canary Islands to Iran). This is why Linnaeus, who lived in Sweden, knew it well, and this was in fact the first species he described.

The genus Ophrys, which in Greek means eyebrow, is characterized by its lower petal (the famous labellum of the orchids), somewhat fleshy and wholly covered by thick hairs, but a more or less wide glabrous and bright spot, in a central position, called macula.

All Ophrys look alike on these points, but they differ between them for the size, colour, shape and pilosity of the labellum, as well as for other more discrete characters which concern particularly the upper petals, the shape of the gynostemium (column including the gynoecium and the stamens, typical of the family of the orchids).

But the most original character of the Ophrys is none of the aforementioned, as it cannot be seen: it’s the scent of the labellum!

This one gets excited, even from far away, by chemical signals of sexual type (pheromones) and heads irresistibly towards the flower, as soon as it has identified the same. 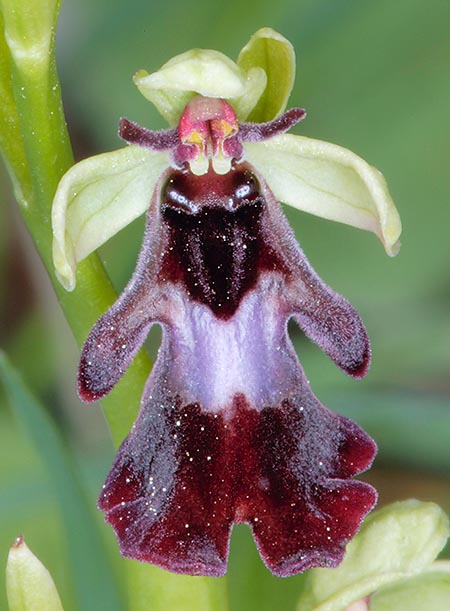 The flower is pollinated by male wasps of the genus Argogorytes © G. Mazza

Once in contact with the labellum, the physical and chemical resemblance is such that the male, fooled, tries a fictitious copulation, called pseudo-copulation, during which it hits the pollinia (groups of pollens typical of the orchids), which will adhere to its body, till the … next flower, which will be, with the same ruse, pollinated!

This mechanism, very rare in the vegetal world, may be often observed in the tropical orchids … and in the Mediterranean ones.

The Linnaeus’ Ophrys insectifera, is in short, literally, the “insect-carrying” Ophrys, which is the same.

We have not to forget that this is the “type-species” of this genus, and therefore its name, emblematic, is more than ever nailed.

Its specific pollinating insect is a solitary wasp of the genus Argogorytes (Hymenoptera, Crabronidae), whilst most of the other Ophrys are pollinated by solitary bees (genera Andrena, Eucera, etc.), or, less frequently, by bumble bees, beetles or flies.

In the case of the Ophrys insectifera, the insect male enters an anterior pseudo-copulation of the flower, which means that its head gets in contact with the pollinia. In such instance, we talk therefore of cephalic pseudo-copulation.

In the opposite case (almost equally frequent), when the insect looks back, it’s its abdomen which gets in touch with the pollinia, and consequently we talk of abdominal pseudo-copulation.

Except the Ophrys apifera Hudson, 1762, the only autogamous species of the genus (it does not need the insect as it may self-pollinate!), all the Ophrys are much polymorphous and their chemical and biologic characteristics vary not only from one species to another, but also among populations and, in quite a small amount, even among individuals.

The insect male and its behaviour are the only regulator of the reproduction and therefore of the associated characteristics.

Thanks to this mechanism, the species evolve quite quickly and multiply throughout space and time.
So today, in the Mediterranean, in Europe and in Middle East, there are several hundreds (their precise number is unknown) of species of Ophrys. Some appear very isolated (in only one location), others are very much diffused (in more countries), but all deserve our attention and protection, as they form part of a complex biologic system in constant evolution, which interacts with the animal behaviour and the ecosystems which host them.