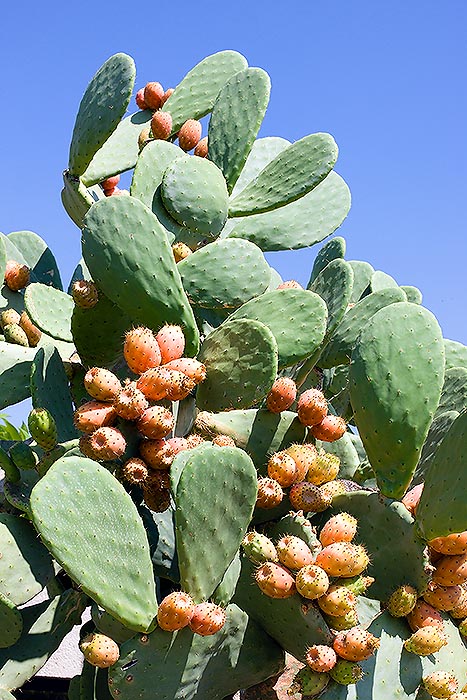 The Opuntia ficus-indica (L.) Mill. (1768), cultivated since remote times and now naturalized in many tropical, subtropical and warm-temperate regions, is thought to be native to Mexico.

Shrubby plant, with stems tall up to 5 m formed by flattened segments, the cladodes, which are modified stems, with an obovate to elliptic form, 20-50 cm long, 10-25 cm broad and 2-3 cm thick, with grey or green-grey epidermis, to which is entrusted the photosynthetic function; a thin waxy coat covers their surface with the purpose to limit the transpiration, and therefore the loss of liquids, and to reflect part of the light.

During its growth the cladodes are provided with rudimental conical leaves, 3-4 mm long, spirally placed, which persist for short time.

At the base of the leaves are present the areoles, almost elliptic structures which can be considered as modified latent gemmae, 2-4 mm long, provided with glochids, tufts of thin, few mm long thorns, with a yellow, hooked apex, they too short lasting, and possibly, also equipped with thorns, one to six, white, 0,5-3 cm long.

With the time, the cladodes at the base of the plant lignify so much to form a robust trunk which can reach a diameter of 35 cm.

The solitary flowers, 5-8 cm of diameter, are hermaphrodite, and originate in May-June, usually from the areoles placed on the upper edge of the one year old cladodes, have ovate or obovate, 20 mm long and yellow sepals, with a green or red central band and obovate or oblong yellow to orange petals, 25-35 mm long and 15-20 mm broad, with rounded or truncate apex; the flowers remain open for 1-2 days. 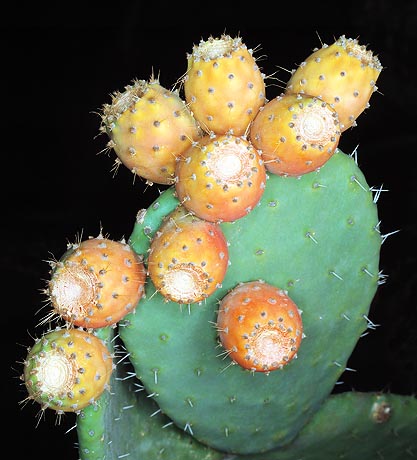 Edible fruits. Cladodes rich in minerals and vitamins A, B6 and K © Giuseppe Mazza

The fruit is an ovoid or oblong fleshy berry, hollow (umbilicate) at the apex, with a length of 5-10 cm, a diameter of 4-8 cm, and a weight of 100-300 g, yellow, orange or purple hen ripe, depending on the variety, with the surface covered by thick groups of glochids; the pulp is juicy, whitish to violet, and contains several seeds (about one hundred), almost elliptic, about 4×5 mm, grey or bronze.

The plant, thanks to its great adaptability to different environmental conditions and the facility with which it disseminates through the animals, has spread and naturalized in various parts of the earth, in particular in the Mediterranean area, Australia and South Africa, often suffocating the autochthonous vegetation.

The best places for the cultivation are the rocky or sandy, dry or semi-dry, soils, even poor provided perfectly draining, in full sun in areas with average annual temperatures over the 18°C; therefore areas not easily utilizable for other cultivations.

For what the resistance to the low temperatures is concerned, the young plants can get already damages with temperatures around the -3°C, adult plants can resist without too much damage up to about -6°C, whilst the base, if lignified, can survive for short time up to -10°C.

On the ornamental point of view, its best collocation is in vast “desert” gardens, where in any case its positioning is to be greatly cared, far away from passage areas, seen the size it can reach, the glochids and possible thorns; for these characteristics, it is also an excellent plant for realizing defensive barriers.

Due to its ample range and the long time in cultivation, it has originated several varieties which differentiate both for the characteristics of the fruit and of the cladodes, selected depending on the utilizations for which they are planned.

The fruits, which are to be carefully handled due to the presence of the annoying and painful glochids, are consumed fresh or transformed for the production of alcoholic drinks, juices, jams, etc., the cladodes, which beyond their intrinsic nourishing value, being rich of vitamins (A, B6, C, K) and minerals, contain a high quantity of water and are an important resource for the animal alimentation particularly in arid and semi-arid zones. In some regions, in particular in Mexico, the young cladodes, peeled of the cuticle, boiled or fried are commonly utilized for human consumption and are rich of fibres and of antioxidant substances, in particular betanin and indicaxanthin, and have also a low contents of carbohydrates, and therefore can be useful in the treatment of obesity and in the diabetes.

Flowers, fruits and cladodes, and their extracts, rightly treated, are variously utilized in the alimentary, pharmaceutical and cosmetic industries. A very old utilization, dating back to the Aztecs, is as host plant for the breeding of the Dactylopius coccus, insect from which they get the carmine, red colorant amply utilized in the alimentary and cosmetic industries under the name of E120. 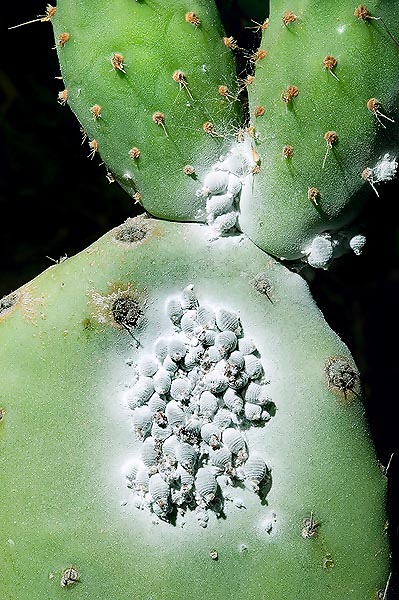 Produces carmine with the breeding of Dactylopius coccus © Mazza

The reproduction of the plant is done only by cutting, as from the seed we cannot be sure, due to the genetic variability, to get plants similar to the mother; it is done in spring-summer, if in open field, through cladodes, possibly two-years old, placed to root, after having dried up the cut for about two weeks, partly interred and simply put on the ground; the production of fruits will start by the second-third year.

For the reproduction by seed, this should be scarified due to the presence of a hard tegument which hinders its germination, a simple alternative method is to dip the seeds in very hot water, at around 80°C, and leave them there while the water cools down, for a whole night, in the wild, the germination is helped by the transit through the digestive system of the animals eating them.

The seeds are to be distributed, as soon as interred, on a sandy substratum kept humid and put in a very luminous place at a temperature over the 20°C, better between 25 and 30°C; the new plants begin the production by around the seventh year of age.

Sicily, where the plant was introduced during the first half of the XVI century and where, thanks to the characteristics of the soils and of the climate, it has naturalized and so much spread to become the symbol of the island, is the second producer in the world for the fruits after Mexico, but the first for their quality, whilst Mexico is the first one for the cladodes, which, as said before, are amply utilized in the alimentation.

The Sicilian production is mainly directed towards the tardive fruits and of superior quality, obtained through the “scozzolatura”, technique which consists in eliminating the normal spring blossoming which, thanks to the re-flowering capacity of the plant, is followed by a thinner second blossoming, which therefore produces lesser fruits, but bigger in size, more juicy and sweeter, ripening in autumn; the technique and the name “scozzolatura” have spread from Sicily and are part of the cultivating techniques of other producing countries.

Opuntia ficus-indica was last modified: May 8th, 2018 by Giuseppe Mazza