The plant is native to Argentina, Brazil and Peru, where it grows in the semi-arid Andean region, between the 3.000 and the 4.000 m of altitude, characterized by a cold and dry climate in winter and warm with rare rainfalls in summer, often being the only emerging vegetation between the low xerophilous bushes.

The name of the genus comes from the combination of the Greek word “òros” = mountain and Cereus, name of another genus of Cactaceae, therefore, mountain Cereus, with reference to the altitudes of its origin countries; the name of the species is honoured to the French horticulturist and botanist Jacques Martin Cels (1743-1806).

The Oreocereus celsianus (Lem. ex Salm-Dyck) Riccob. (1909) is a columnar, slow growing, cespitose plant, little ramified at the top, with stems which, in the wild, may reach and exceed, in the older specimens, the 3 m of height with 8-12 cm of diameter; the stems at the base are initially prostrate then erect, have 9-15 straight ribs, one centimetre tall, with just prominent tubercles and green-grey to dark green epidermis. 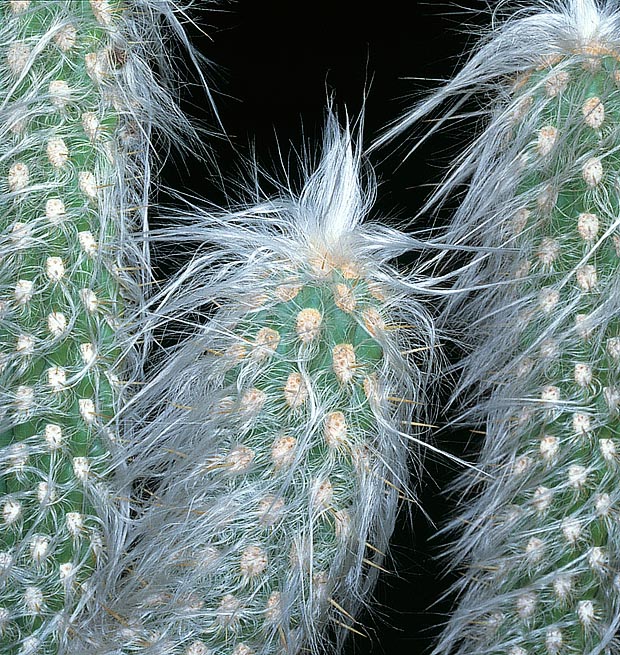 Oreocereus celsianus is a columnar species of semi arid Andean area of Argentina, Bolivia and Peru, at 3000-4000 m of altitude. 3 m stems and 8-12 cm of diameter. The day flowers are pollinated by a hummingbird © Giuseppe Mazza

The oval areolas are equipped with long white setose hairs, which, with the time, tend in good part to lose, of 9 radial thorns long up to about 2 cm and 1-4 central, robust thorns, yellow and long up to about 6 cm.

The flowers generate at the terminal part of the stems, are diurnal, tubular, slightly curved and 7-9 cm long with corolla of 2-3 cm of diameter; the floral tube is covered by short acuminate scales and long white and black hairs; the outer tepals are of a greenish brown colour, the inner ones are from mauve pink to dark red and the filaments are red.

The pollinator of this so particularly structured flower is the Patagona gigas, the largest of the hummingbirds. The fruits are globular, dry, of yellow colour, of about 3 to 5 cm of diameter, dehiscent at the base (dehiscent are the fruits which, when ripe, open spontaneously on the plant) and contain several black seeds. It reproduces by seed and by division.

Easily found and cultivated plant, is to be placed in full sun, on much porous and draining soils, as it is particularly sensitive to the radical rottenness, soils which may be composed by common, fertilized, garden earth, coarse sand (or agri-perlite) and crushed, dustless, stone in equal quantities. Even if it stands, in dry soil and for short time, temperatures up to -12 °C, excepting situations similar to those of its origin, it is better not to expose it in open air with temperatures lower than -5/-7 °C, even if in aerated and protected from the rain site, in order to avoid the formation of anti-aesthetic spots on the epidermis.

Where the climate does not allow its cultivation in open air, it is to be cultivated in pot, thanks also to its slow growth, with the same aforementioned modalities, in order to shelter it in winter. In summer, during the vegetative period, is to be moderately watered; in winter it is to be kept dry with temperatures preferably between the +5 and +10 °C, avoiding locations where the humidity stagnates, as this might cause the outcome of fungine sicknesses.

Oreocereus celsianus was last modified: May 9th, 2018 by Giuseppe Mazza