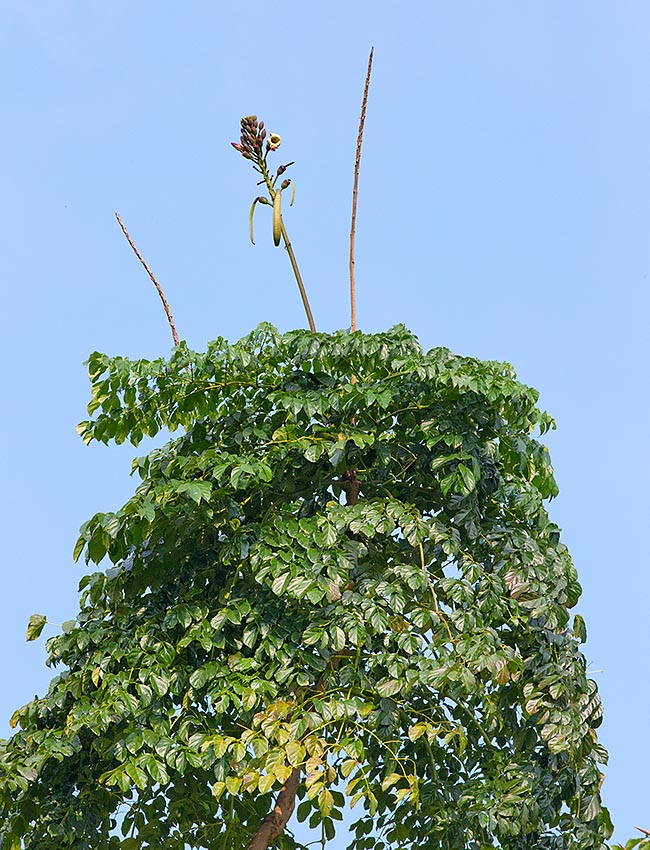 The Oroxylum indicum (L.) Kurz (1877) is a deciduous or semi-deciduous little ramified tree, up to about 15 m tall with cylindrical trunk of 15-30 cm of diameter and brown-greyish bark vertically fissured. The leaves are opposite, grouped towards the apex of the branches, imparipinnate, bi- or tripinnate, 0,6-1,5 m long and 0,9 m broad, with opposite leaflets from ovate to elliptic with pointed apex and entire margin, 5-12 cm long and 3-10 cm broad; the cylindrical foliar axes, enlarged in the points of insertion, which, when dry, cumulate at the base of the tree, give the impression of a pile of bones of broken limbs, whence one of the most characteristic common names.

Inflorescences in 0,6-1,5 m long erect terminal racemes carrying numerous hermaphroditic flowers, on a 3-6 cm long pedicel, with coriaceous campanulate calyx, 2-4 cm long and of 2 cm of diameter, funnel-shaped corolla, of about 10 cm of length and 6-8 cm of diameter, with 5 lobes slightly retroflected, externally reddish purple, internally pale pinkish yellow and 5 stamina; the flowers open by night and emit an unpleasant odour which attracts the bats that take care of the pollination. 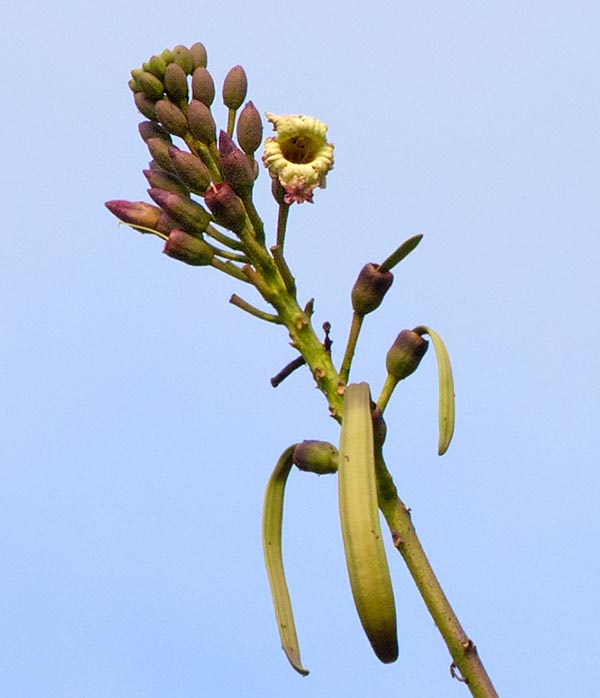 Flowers open by night and are pollinated by bats. Edible parts and medicinal virtues © Giuseppe Mazza

The fruits are woody, flattened, bivalved capsules, sabre-shaped, drooping, 0,5-1,2 m long , 5-10 cm broad and of about 1 cm of thickness, containing numerous flat discoid seeds surrounded, but at the base, by an ample papery whitish semi-transparent wing, 5-8 cm long and 3-4 cm broad, which favours their dispersion by means of the wind.

It easily reproduces by seed, which often germinates in the capsule still hanging on the tree if there are favourable conditions of humidity, by cutting and by root suckers, produced in great quantity.

Fast-growing species is cultivable in the tropical and subtropical regions, where it can bear, when adult, values of temperature close to the 0 °C only if exceptional and of very short duration, it requires a full sun or semi-shaded position and easily adapts to different climatic conditions, from semi-arid to humid, and to various types of soil.

All parts of the plant are utilized since remote times in the traditional medicine, where the species occupies a preeminent position, for various pathologies; laboratory studies have confirmed the presence of promising bioactive substances and further researches are underway.

Besides this, the young leaves and the flowers, raw or cooked, and the boiled unripe fruits, are consumed as vegetables, and from the bark, rich in tannins, they get a dye.

Finally, it is sometimes cultivated as ornamental due to its particular look.