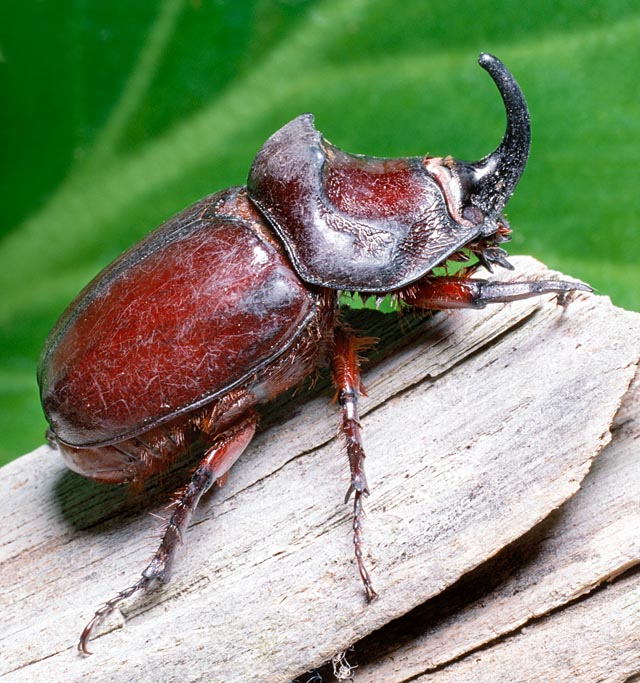 The Rhinoceros beetle (Oryctes nasicornis Linnaeus, 1758); from the Greek “orysso”, that is, to dig and from the Latin “nasus cornus”, meaning, respectively, nose and horn, is a coleopter belonging to the family Scarabaeidae and to the subfamily of the Dynastinae.

To this subfamily belong more than 300 species, many of which are known due to their peculiar forms and for their remarkable size. For instance, the Hercules beetle (Dynastes hercules) adult, present n South America, may reach the 170 mm. They are able to lift weights 850 times heavier than their body weight (up to 130 grams).

Generally, in the Dynastinae the exoskeleton is very thick and there is a marked sexual dimorphism, with the male presenting one or more horns (if one only, it’s cephalic, on the contrary, if there are present more horns, then these develop from the pronotum), of various shapes and lengths (absent in the female).

Rhinoceros beetle is the common name widely utilized in Italy as well as in Europe due to its unmistakable cephalic horn.

It is distributed in the paleo-arctic region (it goes up to eastern Africa and to Pakistan). It is present in all Europe, Italy included.

The adults and the larvae are associated to the dead wood. In particular, the larvae live and nourish of the dead and/or decomposing wood (it is easy to find them inside roots or tree decaying cavities). On the contrary, the adults are able to fly and lay the eggs close to cavities and/or roots. 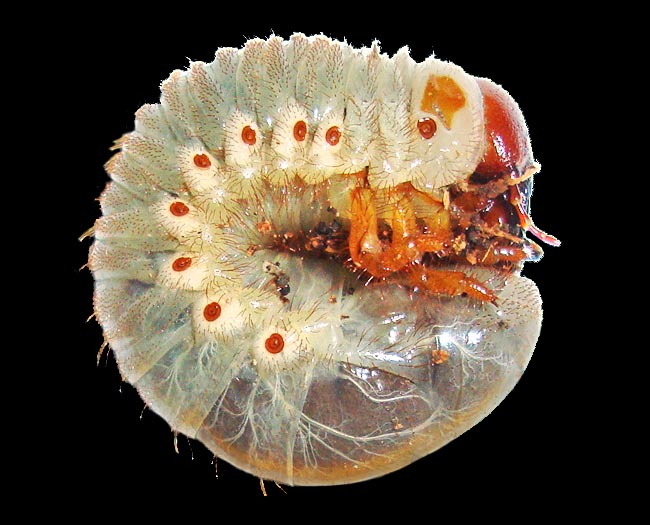 The adults are 35-42 mm long, are of bright brown colour in the pronotum and in the elytra and reddish down in the abdominal region. The stage of adult has a neat and marked sexual dimorphism: the male presents the typical cephalic horn, curved backwards, from which the common name ‘rhinoceros”, whilst the female, in lieu of the cephalic horn, presents a pointed tubercle.

The horn is used by the males in the fighting during the mating season and for digging underground tunnels.

These tunnels allow the adult to shelter from the attack of predators and to lay the eggs (usually, up to 50 per each deposition).

The larval stage may last several months (up to 4) before metamorphosizing in adult.

The larva nourishes of decaying and of dead wood. The larvae, 60-100 mm long, have soft body and are of “melolonthoid” type, that is, always C curved.

They are white with brown head and well developed and sclerified jaws, with three pairs of legs in the thorax zone.

The larvae develop in the decomposing wood of arboreal plants, mainly broad-leaved trees. They can live up to 4 years (the development is likely to be influenced by the abundance and the quality of the wood dead). 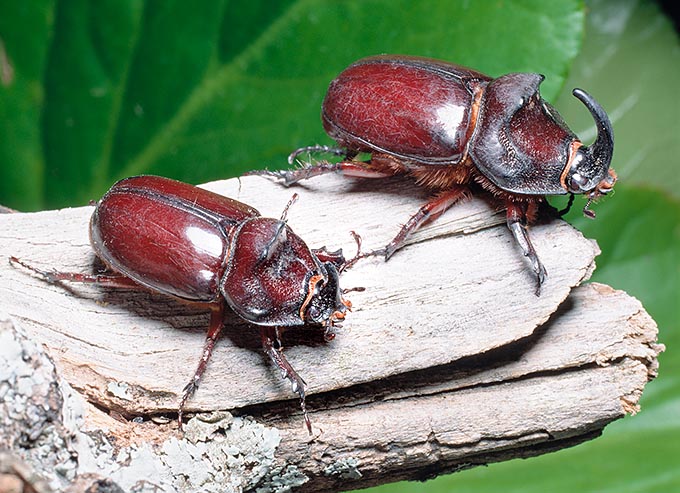 The larvae can be parasitized by a wasp, the Megascolia maculata, which injects, with its ovodepositor shaped and long like a real syringe, its eggs inside it. Later on, the larvae of the wasp will develop inside the larva of the rhinoceros beetle nourishing of the same.

The adults fly during the dusk and night hours of the summer months and are attracted by the artificial lights, and for this reason they are easy to observe close to the streetlights of the city. Moreover, the adults do not nourish: this is possible thanks to the fat bodies, a set of cells with function and accumulation of reserve of fats, present in the adult.

The reserves of fat are accumulated during the larval stage. Usually, the females die upon the ovodeposition whilst the males live only during the summer period. In a few words, the adult stage serves only for the mating and for the dispersion of the species.