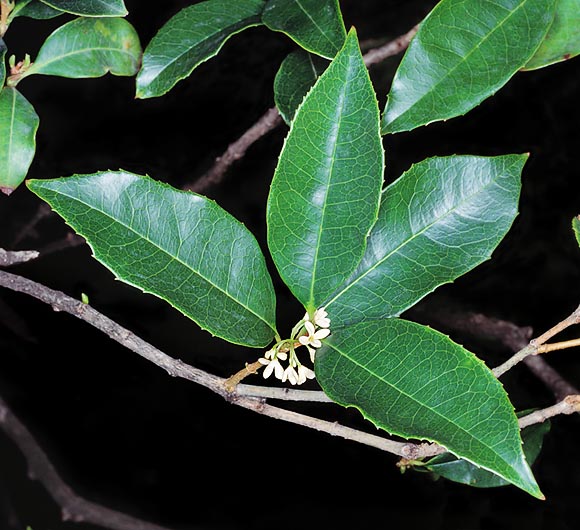 Osmanthus fragrans may be 10 m tall. The tiny flower is much scented © Giuseppe Mazza

The species is native to Bhutan, Cambodia, China (Guizhou, Sichuan and Yunnan), India (Assam, Nagaland and Sikkim), Japan (Kyushu), Myanmar, Nepal, Thailand and Vietnam, where it grows in the mixed evergreen mountain forests.

The name of the genus is the combination of the Greek terms “osmé” = scent and “ánthos” = flower, with obvious reference; the name of the species is the Latin term “fragrans” = fragrant.

The Osmanthus fragrans Lour. (1790) is a shrub or a small evergreen tree much ramified and slow-growing, tall up to about 10 m, even if in cultivation it keeps lower, with a grey-brown smooth bark.

The leaves, on a 0,8-1,2 cm long petiole, are opposite of sub-opposite, coriaceous, of glossy dark green colour, from elliptic to lanceolate, 7-15 cm long and 2,5-5 cm broad, with entire margin, or slightly dentate in the terminal part, and pointed apex.

It has numerous flowers, intensely perfumed, which appear on the one year old branches, almost hidden by the foliage, in spring and in late summer-early autumn, sporadically, during the rest of the year, united in axillar cymes on a 0,5-1 cm long peduncle, with 1 mm long calyx and a four lobed whitish corolla, or orange, in the variety aurantiacus, of 5 mm of diameter. 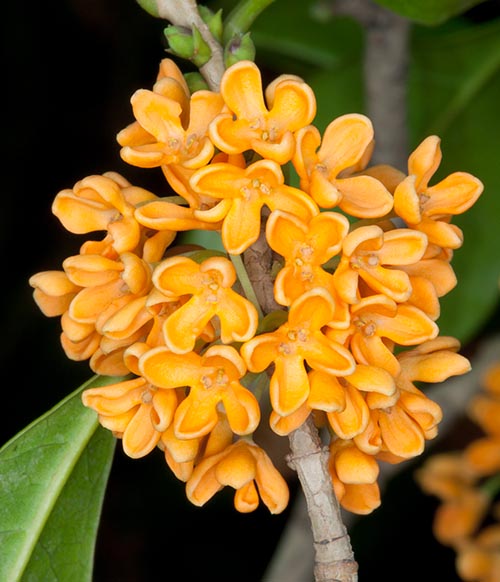 The fruits as a blackish purple, 1-1,5 cm long, ellipsoid drupe.

It usually reproduces by semi-woody cutting in early summer in a sandy substratum kept humid.

It is an ornamental species which characterizes for the intense scent of its tiny flowers, particularly diffused in China where the dried flowers are utilized for aromatizing cakes, food and drinks, in particular, the tea, and the essential oil stands at the base of very expensive perfumes, so much to increase its cultivation on an industrial scale in the centre and south of the country.

It is not particular for what the soils are concerned, even if it prefers the sandy, acidic or neutral, well draining, ones, as it does not stand those permanently humid; it requires an full sun exposition or even partial shade, but with a scarcer flowering and a less dense foliage, utilizable as isolated specimen, for mixed borders and boundary hedges.

It may be cultivated in an ample variety of climates; it resists to the low temperatures, down to even -15 °C, for a very short period, lower temperatures of some degrees destroy the aerial part. The waterings must be regular during the vegetative period in the young plants, when adult, it can stand periods of dryness.

It is cultivable also in pot utilizing a sandy substratum rich of organic substance, acidic or neutral, with regular waterings during the vegetative time, but allowing the superficial layer to dry up before giving water again. Seen its slow growth, it does not need frequent prunings.

Leaves, bark, buds and seeds are, since long, utilized in the traditional medicine, especially the Chinese one.