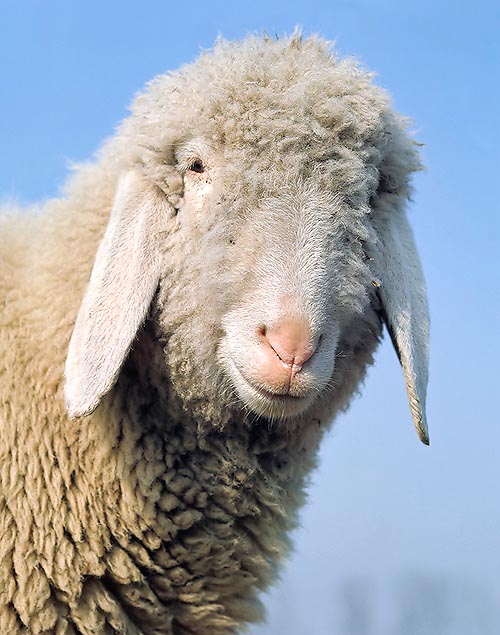 Like the other domestic quadrupeds (cattle, pigs, horses), the sheep has been domesticated long time ago, probably, by the beginning of the first proto-forms of agriculture and farming, started by the Homo sapiens sapiens, about 12.000-14.000 years ago.

Perhaps, among all the present species and domestic races, the Sheep (Ovis aries) has been the first of these animals to be confined in a limited environment or kept tied, in order to be always available to use and consumption by the human being.
This primitiveness of domestication renders difficult to the biologists to find which wild species it comes from.

As for other tamed species, however, we tend to believe that the domestic sheep is not coming from one only wild species, but from a certain number of them, such as Mouflon (Ovis musimon), the Argali (Ovis ammon) and other extinct goats, not to talk about the fruit of crossings and hybridizations, which by now are impossible to reconstruct, even if in the fundamental lines only.

The variety of the sheep breeds is therefore explained, besides the work of artificial selection performed unconsciously by the breeders (well before that the Mendel’s laws were known!) also by the prevalence of this or that dominant atavic character, inherited from the various ancestors.

The Sheep and the man

The taming has affected in a predominant way the domestic Sheep (Ovis aries) more than in the other breeding species, practically eliminating all the wild instincts, which surface in the character of any other domestic animal. The sheep, in fact, is essentially devoid of any spirit of initiative. 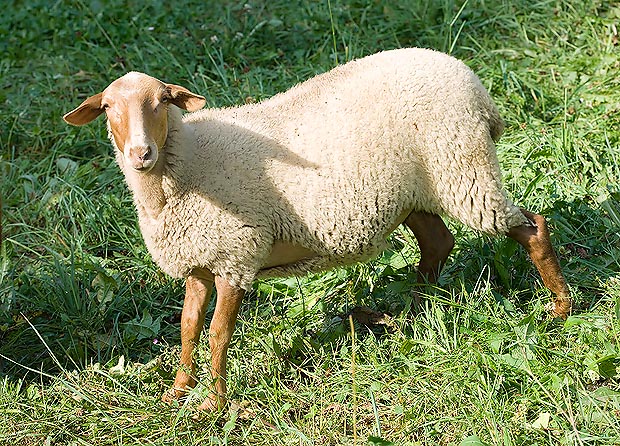 The domestication has proverbially done in itself the cancellation of any form of individuality, so much to make it choosing the mass, that is the flock, rendering it unable to act autonomously, till to literally stop it when out from the group. Extremely shy and scary, hopelessly little smart, a solitary sheep is not in condition to coordinate its flight even in front of the most evident and immediate danger, such as, for instance, a wolf.

Less agile than the goat and even more demanding in the alimentation in respect to this last one, it has not the rupicolous characteristics of the goat and is unable to climb with the same facility on the steep slopes looking for a meagre pasture.

It prefers a more tasty pasture, based on tender grasses, even if, in case of need, it may move with some easiness, safety and good sense of balance, in uneven and inaccessible places. The sheep breeding is performed in all the countries of the world, even if, presently, with the development of the intensive agriculture, it is in constant decline. 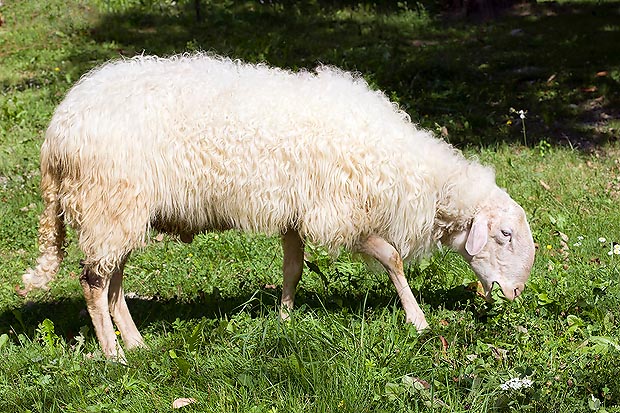 The breeding has three main goals:

To get the milk

To get the meat

To get the fur

There are therefore, along with non specialized (without a specific attitude) races, several races selected for furnishing one or, at most, two of these produce. It is in fact very difficult that a milk and meat sheep may be a good producer of wool, and vice versa. The classification of the very numerous races, done in the basis of several characteristics is not simple at all.

Also because the zoological biologists prefer to take into account zoometric and phylogenetic parameters as classifying characters, like, for instance, the morphology of the head (more precisely, the skull), whilst the agronomists and veterinarians prefer to refer to the aptitudes which characterize them. After my formation, let us see how are classified the races by the zoologists: Head elongated, “dolichocephalic” breeds; Head high and roundish, “brachycephalic” breeds 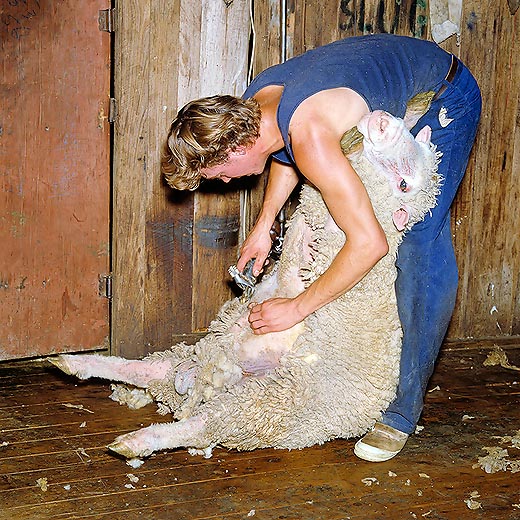 Other biologists use to classify the breeds in function of the presumed phylogenetic origin or exploiting other zoometric parameters, such as the height at the withers, the presence or not of the horns in the females (in the males, the ram or tup, they are always present and have always triangular section), the profile of the head or the length of the tail: this on, in fact, may be very short or even rather long and may be, at times, remarkably adipose (big tail sheep).

With regard to race, the sheep then may have ears of quite different length and variously developed, and be erect or sagging.

The fur, as it is well known, has sustained the textile industry since its birth, though, when they have invented the synthetic fibres, the wool has been almost totally ousted.

This has meant that some breeds created time ago for the wool, such as the New Zealander, obtained by crossing between Romney sheep and Southdown rams, are nowadays bred only for the meat.

Usually, the coat is formed by a layer of long and shaggy hairs, the so called “bristle” under which are shorter, soft and thick hairs: the “wool”.

Nowadays, the quantity relation between bristle and wool is much variable in the different breeds, in relation also with the livestock attitude.

For this reason a sheep merino will have a greater woolly content of fur, as its attitude is that of being a wool sheep. 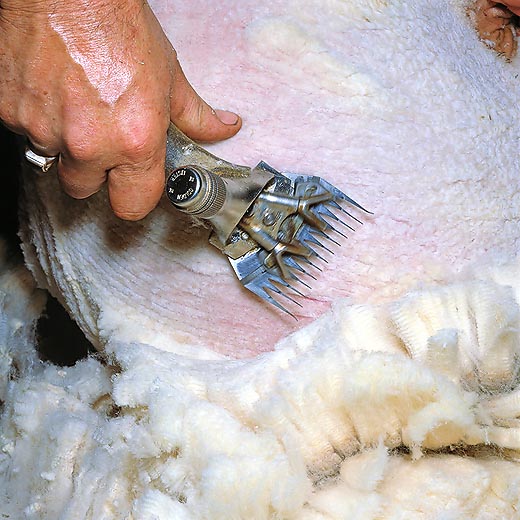 Detail of the shearer used in the Australian nurseries © Giuseppe Mazza

Another classifying criterion more popular among the biologists than the veterinarians and the agronomists (who are more interested in the zoo- technical-economic aspect) is the geographic one: there is a distinction between European, Asian, Africa, etc. breeds and within these ones we get even Italian, French, Spanish, English, German and so on, sub-breeds.

In Italy, just to give an example, the group “merino”, characterized by a particularly thick, compact and white, fleece, is represented by the “Gentile di Puglia”, bred in the Murge and in the Tavoliere of the Puglie.

Speaking about sheep bred uniquely for the wool they may furnish us, there is the “Karakul”, whose lambs’ pelts, killed not after the fifth day from the birth, or even before, furnishes the famous Persian lamb or the Breitschwanz.

Back to the Italian breeds, we recall also the Biellese, Bergamasca and Sardinian races, which, however, may not be defined specialized for a particular attitude, as they furnish at the same time, wool, milk and meat.

This last produce, however, is not much consumed in Italy, unlike what happens in France or in Central Europe, where are located sheep farms exclusively for satisfying the consumption of this meat. In Italy, on the other hand, the milk of sheep is utilized for the dairy production of several very tasty cheeses, which have become DOC produces, such as the Pecorino and the Caciofiore.

Very peculiar is the look of some African and Asian breeds, whose members have at the base of the tail some monstrous fatty lumps, accompanied at times the presence of adipose panels, even on the thighs, which render them, morphologically, extremely weird. 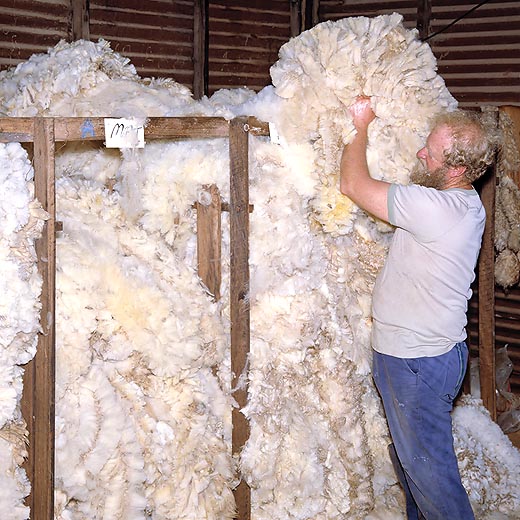 Presently the breeding of the Sheep (Ovis aries) is surely on the wane, and the reasons are to be found probably to the increase of the agriculture, taking place always more intensively, deducting vast extensions of pasturage in the flat regions.

Also the reclamation works contribute in reducing the pasturage zones, as it may be seen in Italy, in the Pontine Marshes and in the southern and insular regions.

On the other hands, this decrement which has almost exclusively interested the sheep-farming practiced in the lowlands, has favoured, as a consequence, the improvement of the sheep patrimony of the Alpine regions and has also resulted in a more rational exploitation of the national land.

It is worth, finally, to mention a classifying criterion based on the quality of their fleece.

They are called woolly sheep those who, in the nature of their fleece are closer to the wild sheep.

They have a big, glossy and curly superficial fleece.

As sheep with mixed wool, we mean the specimens where the wool and the bristle, mixed, are long.

At last, there are the sheep with fleece of only pure wool: in the sheep of this type, the bristle is particularly absent and the true and real fleece of wool is remarkably extended and reinforced. 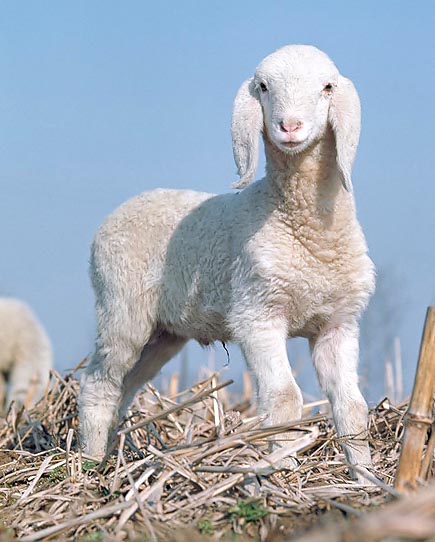 Cosmopolitan, bred everywhere, they may be present even at the semi-wild state in countries such as Africa, South America and Asia, where the zootechny is less rational and less developed.

Gregarious animals in an absolute sense, they prefer meadows with tender grass, in wide valleys.

The description the morphologic parameters for the tamed Sheep (Ovis aries), in an absolute sense, is impossible, due to the extremely numerous breeds which characterize this species. As a general rule, we can say that an adult sheep varies between the 90 and the 130 cm at the withers, and may weigh (but this depends also on the attitude for which it is bred, if for wool, meat or milk), from 22 to 40 kg.

Just born, a lamb weighs 1 kg as an average and is about 21-22 cm long. They may live up to 16-19 years. An anatomical oddity is that, at nasal level, there is present an admirable network of arterial-venous blood vessels where takes place an exchange, counter current, of heat between the arterial blood and the venous one, which will carry it away, in such a way that the brain will always get arterial blood at the right temperature. The digestive system is typical of the ruminants, and for this, please refer to the text about the Artiodactyls and the Bos taurus.

The females have two inguinal globular udders and are sexually mature by the 10-12 months of age. The gestation lasts about five months and the litters are often multiple. Even five lambs may come to life. After the mating, made by the ram or by a tup, happening in spring, time when the females are in oestrum, the litters will take place by early autumn, or little later.