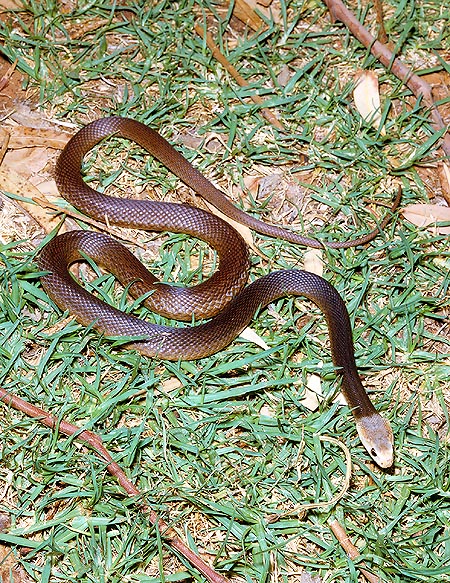 The Taipan venom is 8 times stronger than the Indian cobra's one © G. Mazza

The common Taipan (Oxyuranus scutellatus Peters, 1867, family Elapidae) is, like the Black mamba, almost a legend, and has some characteristics similar to its distant African relative: it is a slender and big serpent, is endowed of a lethal venom already in very small doses, has a choleric temper, ready to bite, which united with a great speed and agility, renders it capable to bite even the upper part of the body of a person and even, in some occasions, the face.

Also the name of this deadly species has something mysterious and uncertain. Someone says it is a local name of the aborigines of the north-eastern part of Australia (York Peninsula and Queensland), and, indeed, the word “dhayban” would belong to the Wik-Mungkan language, furthermore, there is another language, always of the York Peninsula, whose name is Gugu-Thaypan. Another theory is that it comes, on the contrary, from a word of Chinese or Malaysian origin. In fact, in China, Taipan is a personality, a leader, and this might connect with a historical fact concerning Australia: formerly, some workers for the plantations came from Asia and from Malaysia. They were poor people, attracted by the idea of finding work and a decent life, but, at times, in the plantations, they did find the death, and often because of the serpents.

The plantation workers are, all over the world, at least in the warmest areas, the most exposed to incidents related to the presence of serpents. The taipan, abundantly present in the cultivations, also because attracted by the rodents, by sure did impress very much those poor Malaysian workers, when it was administering the death so suddenly and quickly. Seen that “taipan” may mean something similar to “Boss, Sir”, and for those persons the Oxyuranus scutellatus might have been the master of the bush and a not too benevolent boss. On the contrary, the scientific name, come from the old Greek and the Latin, means: serpent with the sharp tail and with the shield-like scales (oxis=acute, oura=tail, scutus= shield).

The taipan is present in two subspecies: the common Australian taipan (Oxyuranus scutellatus scutellatus) and the Papuan taipan (Oxyuranus scutellatus canni), usually of a darker colour. Conversely, not all agreed on the collocation of the so-called inland taipan, the terrestrial serpent with the most powerful venom in absolute, even if less aggressive and dangerous of the common taipans: some consider it as a subspecies of Oxyuranus (Oxyuranus microlepidotus), others Parademansia microlepidota. In any case, here, I will treat only of the common Australian taipan to which the photos do refer. The geographic distribution covers the coastal zone of north-eastern and northern Australia, practically all the Queensland coast, from Grafton, through the York Peninsula and the Gulf of Carpentaria, up to the Northern Territories, to the north-west, including the Melville and Bathurst islands. The preferred habitat is usually fairly humid, with abundant rainfalls and temperatures which never go under the 17 degrees Celsius (winter). In particular, the Queensland sugar fields, rich of rats (Melomys and Rattus rattus) and of mice, are a perfect environment for the taipan (and for other serpents too).

The head of this reptilian is distinct from the neck, and of rectangular shape, with unmistakable red or orange eyes, the buccal fissure is long and the eye is placed more forward than the mid of the same. The nares are evident and stand out on the light colour of the muzzle. The body is slender and cylindrical, up to 3 metres long, covered by dorsal scales slightly keeled. The colour of the dorsal part of the body is brown, in various shades, up to the black, at times, on the contrary, it may be reddish, copper or olive-green, but around the head we may notice a much lighter colouration, usually creamy. The scales, by mid body, are placed in 21-23 rows. 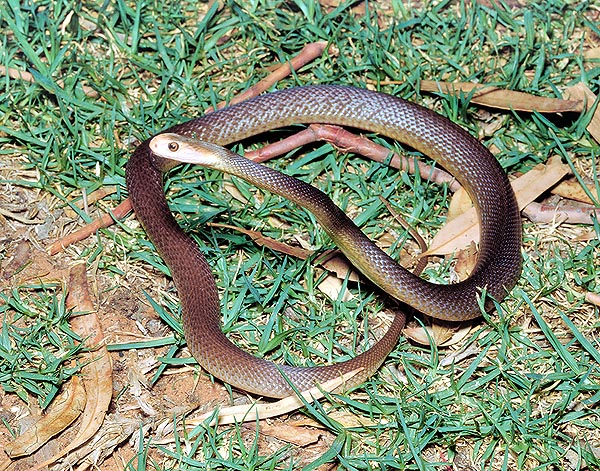 Oxyuranus scutellatus is one of the most intelligent snakes. If it can it flees, if not it bites high © G. Mazza

Essentially diurnal serpent, the taipan is actively hunting, taking advantage of the speed, agility and a lightning bite, but, especially when the climate is very hot it may become crepuscular or partially nocturnal: the preferred hours for hunting are, in any case, the morning and the late afternoon.

As is the case for the black mamba, the reputation of this reptilian is appalling, but is at times exaggerated. Like all serpents, including the most aggressive, if it has the occasion, it prefers to hide and avoid the confrontation with the man, whereby it is not true that it is hunting the unaware hiker; the problem is, if ever, the unexpected encounter with one of these animals in the thick bush, in a field or when it has had not enough forewarning of the approaching intruder. In this case, if we are lucky, the serpent will assume an intimidating attitude for then disappearing if the assumed hazard withdraws in good order or keeps motionless. Otherwise, however, each movement will be construed as a threat and will result in one or more lightning bites, often at a remarkable height from the ground.

The fangs are long, for a proteroglyphous elapid, usually 1 cm, but may even reach the 12 mm, and inoculate even from 120 to 400 mg of venom which is almost eight times more powerful than that of the Indian cobra (Naja naja). Unlike the venom of the mamba, however, purely neurotoxic, (see text of Dendroaspis polylepis , the venom of the taipan is more complicated, and beside the paresis of the various muscular groups that culminates with the immobilization of the respiratory ones, are also massive the phenomena affecting the coagulation, with an increase of the same.

Less important but present, are also the effects related to cytotoxins (oedema, possible necrosis) and to myotoxins (destruction of the muscular fibres, with possible rhabdomyolysis). Other remarkable characteristics of this reptilian are an over the average vision, for what the serpents’ world is concerned, an intelligence, if we want to call it so, which is the most developed among the Australian serpents and the world ones, and a speed and quickness which, luckily, as is the case of the black mamba, render the accidents not frequent, seen that usually the serpent realizes in time of the approaching of a person, and consequently, it moves away.

The reproduction is oviparous and the female lays from 6 to 20 eggs, from which hatch 50 or 60 cm long newborns (further analogy with the black mamba), already perfectly able to kill a human. The therapy of the bite of taipan requires an initial dose of monovalent serum of 12.000 units, but often is necessary, however, the assisted respiration, as well as other therapeutic actions.