The species is native to Madagascar (provinces of Mahajanga and Toliara) where it grows in full sun in the cracks of rocks of various nature, up to about 1400 m of altitude, in semiarid zones characterized by xerophilous flora.

The name of the genus is the combination of the Greek adjective “παχύς” (pachys) = big, burly and of the substantive “πούς, ποδός” (poús, podós) = foot, with reference to the enlarged base; the name of the species is the Latin adjective “rosulatus, a, um” = shaped like a rose, with reference to the leaves arranged in rosette at the apex of the branches.

The Pachypodium rosulatum Baker (1882) is a deciduous or semi-deciduous shrubby species, very variable, that may reach the 2 m of height, in the old specimens in nature, with thick tuberous roots and succulent short and big stem, often shaped like a bottle or of a fiasco, up to 1 m of diameter, that ramifies in succession due to the blooming. The stem and the branches, short and stocky, are provided with couples of conical thorns, 0,5-1,5 cm long, that with the time tend to disappear at the base that becomes smooth and greyish green. 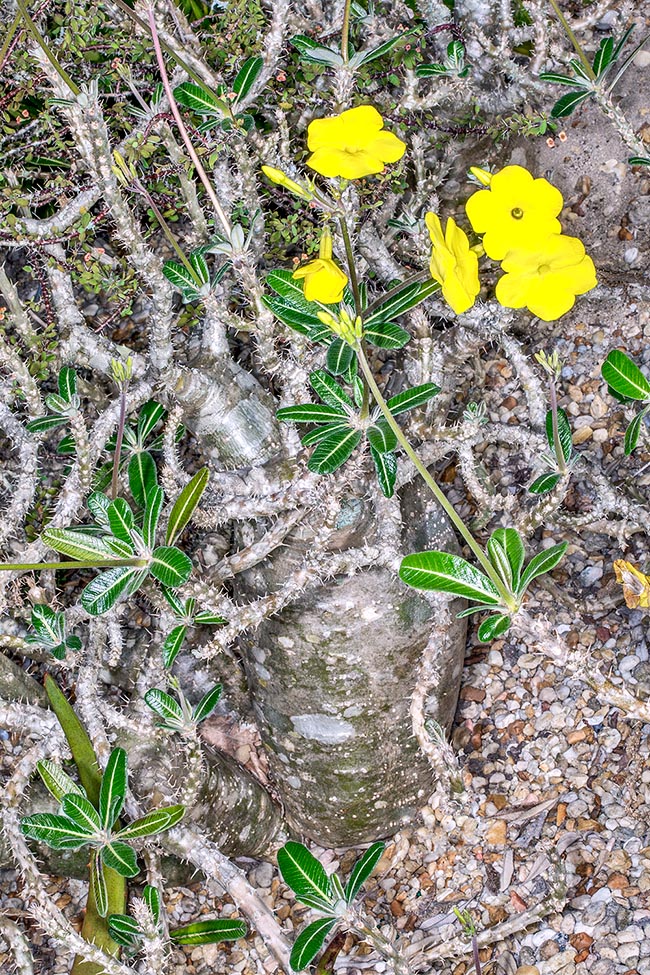 Native to the arid zones of Madagascar, the Pachypodium rosulatum is a deciduous or semi-deciduous species, very variable, that may reach the height of 2 m with succulent short and big stem, often shaped like a bottle or a fiasco. Short and stocky branches, thorny, like the stem, when young. Corollas of intense yellow colour. Easy cultivation © Giuseppe Mazza

The leaves, grouped at the apex of th branches, are simple, alternate, sessile or subsessile, ovate to elliptic to oblanceolate with entire margin and obtuse apex, coriaceous, of dark green colour and slightly glossy above, pale green and pubescent below, 3-8 cm long and 1-3,5 cm broad. Terminal inflorescences, on a 6-40 cm long peduncle, carrying 4-10 flowers with calyx formed by 5 oblong sepals merged at the base of pale green colour, pubescent, 3-5 mm long.

Infundibuliform corolla of intense yellow colour, with corolline tube, 2,5-4,5 cm long, cylindrical at the base, dilated at the apex up to 1,2 cm of diameter, and 5 ovate to obovate lobes with rounded apex, slightly asymmetrical, 1,5-2 cm long. Pubescent ovary formed by two free carpels united at the apex with the style and the stigma in correspondence to the centreline of the anthers, about 1 cm long. The fruit is formed by the enlarged carpels forming two fusiform divergent follicles of dark brown colour when ripe, 8-20 cm long, containing numerous ovoid seeds, about 0,8 cm long, provided at the extremity of a tuft of brownish hairs, about 2 cm long, that favour its dispersion through the wind.

It reproduces by seed, slightly covered by the substratum, that must be particularly draining and porous, maintained slightly humid at a temperature of 20-28 °C, with germination times of 1-3 weeks and first blooming that may occur already starting from two years

One of the most cultivated Pachypodium by the lovers of the caudiciforms, for the shape of the stem as well as for the bright blooming, of relatively easy cultivation, provided particularly cared at the water regime. It requires full sun or, at most, a slight shade, high temperatures, perfectly draining loams, porous, formed per ½ – 2/3 by inerts such as coarse sand, lapillo, fine gravel, etc. The watering in summer must be regular, but allowing the substratum to dry up before giving water again, then progressively reduced and spaced with the decrease of the temperatures, almost to suspend them in winter, if maintained at temperatures over the 15 °C, completely suspended with lower temperatures, it may stand exceptional values around the 0 °C, only if perfectly dry.

The species is reported in the appendix II of the CITES (species for which the trade is ruled at international level).