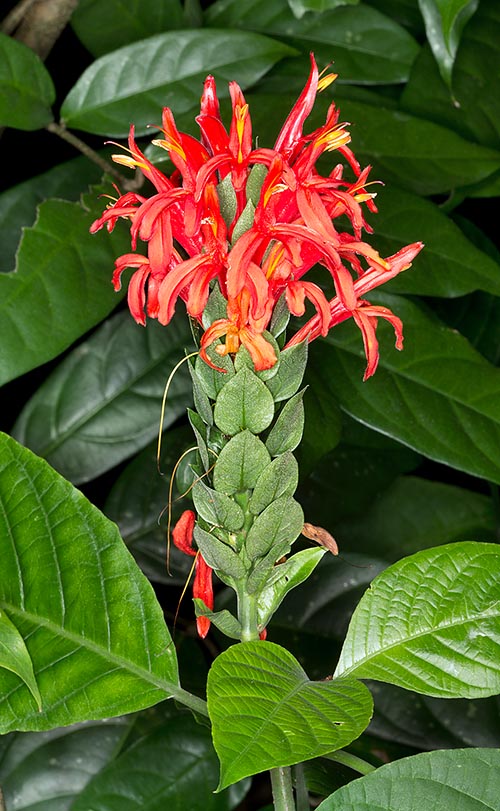 The species is native to Brazil (Amapa, Amazonas, Para and Rondonia), French Guyana and Peru where it lives mainly in the clearings and at the margins of the humid forests up to about 250 m of altitude.

The Pachystachys coccinea (Aubl.) Nees (1847) is an evergreen, much ramified, small perennial shrub, 1-2 m tall, with leaves, on a 2-6 cm long petiole, simple, opposite, oblong or elliptic with pointed apex and entire margin, 12-25 cm long and 6-10 cm broad, of dark green colour with evident venations.

It reproduces by seed and easily by apical cutting in spring in sandy loam maintained humid at the temperature of 22-24 °C.

Species of remarkable ornamental and landscaping value due to the showy inflorescences which stand out from the dark green foliage, cultivable in the tropical and humid subtropical climate regions where temperatures under the +10 °C are exceptional and very short lasting events. It requires an exposition in full sun or in slight shade and draining soils rich of organic substance, acidic to neutral, maintained constantly humid, but without stagnations. It well bears pruning, even if drastic, for a more compact posture and for stimulating the blooming.

It is cultivable also in pot, utilizing organic loam with addition of coarse siliceous sand or agri-perlite for a 30% for improving the drainage, in order to be sheltered, where the climate does not allow the open air permanence during the winter months, in luminous position, like behind a south-facing window, with diurnal temperatures of 20-24 °C and lowest night ones not under the 16 °C. Watering must be regular in summer, more spaced in winter, but without ever allowing the substratum to dry up completely; if the ambient is too dry, nebulise with non calcareous water at ambient temperature. The fertilizations are to be done from spring to autumn, at 2-3 months intervals, with balanced products with microelements at half dosage than what suggested on the package.

It is easily subject to attacks of mites (spider mites) and aphids, to be treated with specific products in case of serious infestation.