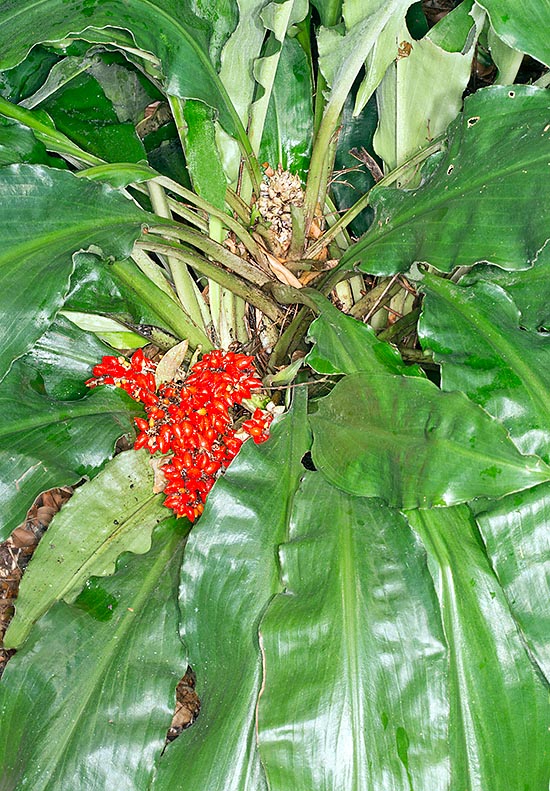 The species is native to Cameroon, Congo, Democratic Republic of the Congo, Equatorial Guinea, Gabon, Guinea, Guinea Gulf Islands, Ivory Coast, Liberia, Nigeria, Sierra Leone and Togo, where it lives in the under-wood of the pluvial forests.

The genus is honoured to the French botanist and naturalist Ambroise Palisot de Beauvois (1752-1820), the species to the English botanist and collector Charles Barter (?-1859).

The Palisota barteri Hook.f. (1862) is a perennial herbaceous species with underground rhizome, evergreen, almost acaulous, 30-90 cm tall, with a rosette of leaves, on an up to 20 cm long petiole, oblong to obovate-lanceolate with long pointed apex and villous entire margins, 25-60 cm long and up to 22 cm road, of intense green colour.

Terminal cymose inflorescence, on a peduncle shorter than the petioles, erect, compact, cylindrical, 4-10 cm long, carrying a crowd of small hermaphroditic flowers with 3 sepals and 3 petals practically the same, of white or white suffused with purple colour, 3 fertile stamina and superior ovary. The fruits are initially green berries, then bright red when ripe, very decorative, containing some seeds.

It reproduces by seed, in organic loam with addition of siliceous sand or agri-perlite for a 30%, maintained humid at the temperature of 22-24 °C, and easily by division.

Fairly rare species in cultivation utilizable in group, for borders and as soil cover in the regions with tropical and humid subtropical climate, in semi-shaded to shaded position, on soils rich of organic substance, well drained, maintained almost constantly humid.

Elsewhere, it can be cultivated in pot, using a particularly draining and aerated organic substratum, in order to be sheltered during the coldest months in ambients, even if little luminous, with diurnal temperatures of 20-24 °C and lowest night ones not under the 16 °C. The watering must be regular in summer, more spaced in winter, leaving the substratum to partially dry up before giving water again, taking care of nebulising frequently, when in presence of too dry air, with water at room temperature, non calcareous in order to avoid anti-aesthetic spots on the leaves. The fertilizations are to be made from spring to autumn, preferably with hydro-soluble balanced products with microelements at half dosage than what suggested on the package.

All parts of the plant are toxic due to the presence of calcium oxalates.

→ To appreciate the biodiversity within the COMMELINACEAE family please click here.