The species is native to the Mascarenhas Islands where it mainly lives along the coasts on sandy soils.

The name of the genus comes from the Malaysian one “pandang”; the specific one is the Latin adjective“utils, e” = useful, with reference to the leaves and the fibres derived amply utilized by the local populations for several uses. 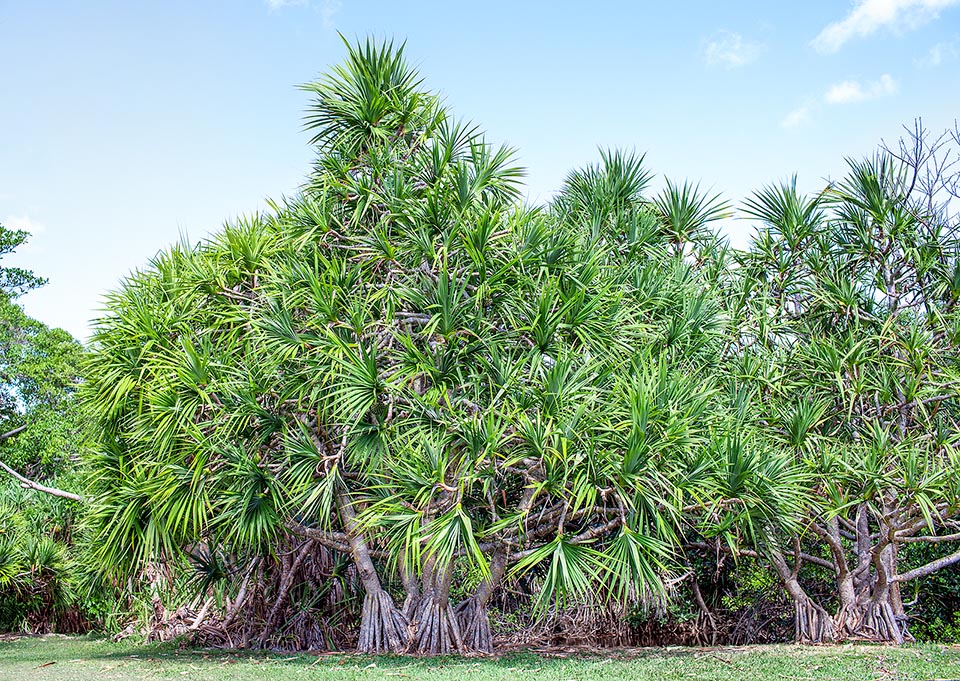 Native to Mascarenhas, where mainly lives along the coasts on sandy soils, the Panadanus utilis owes the scientific name of useful due to the fibrous, multipurpose leaves, the ornamental characteristics and as wind-breaking species resistant the saltiness to protect cultivations, such as for instance, in Réunion, the vanilla plantations © Giuseppe Mazza

The Pandanus utilis Bory (1804) is a dioecious monocotyledonous species, perennial, evergreen, that in cultivation does not usually exceed the 6-9 m of height, with ramified stems provided at the base of aerial stilt roots, of 3-8 cm of diameter, that besides the normal function of absorption and anchoring act as support to the crown.

The leaves, densely arranged spirally in three series at the apex of the branches, are simple, sessile with base partially wrapping the stem, linear, keeled, with long pointed apex, 0,5-2 m long and 4-11 cm broad, of dark bluish green colour, waxy; margins and median vein are provided of reddish thorns bent towards the apex, 1-4 mm long. Terminal inflorescences, the male ones drooping in panicle, 30-80 cm long, with spiky lateral ramifications subtended by whitish bracts, bearing a dense multitude of flowers having no perianth, with 8-12 stamens of cream yellow colour, odorous. Globose female inflorescences with squeezed together flowers formed by the only ovary and by the sessile stigma. 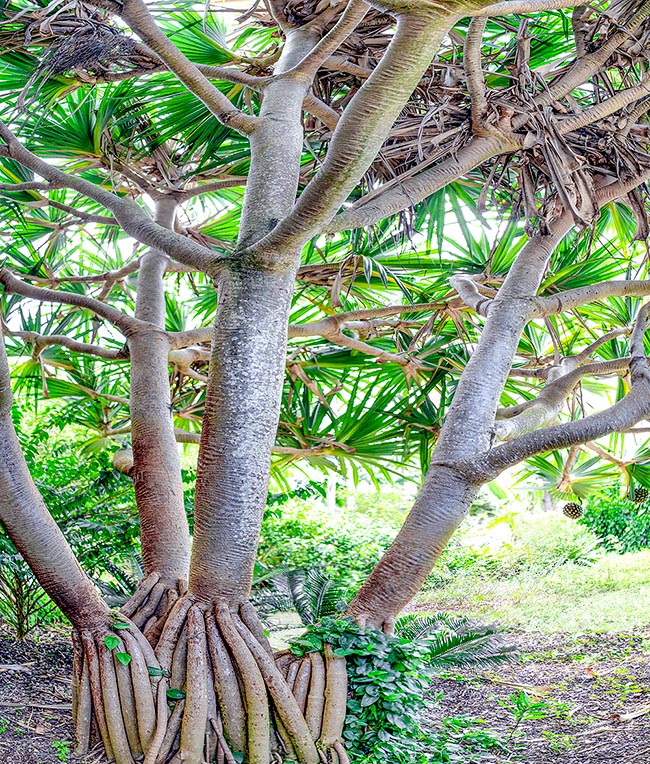 It rarely exceeds the height of 6-9 m, with ramified stems provided at the base of aerial stilt roots, of 3-8 cm of diameter, that besides the normal function of absorption and anchoring sustain the crown © Giuseppe Mazza

The fruit, on robust peduncle, is a syncarp (whole of concrescent fruits and merged together) globose, hanging, of 15-22 cm of diameter, formed by 100-200 drupes angular due to the mutual pressure, about 4 cm long, free in the upper half, initially green, with a reddish band at the base.

It propagates by seed, previously kept in water for 2 days, placed superficially on draining loam maintained humid at the temperature of 28-30 °C, with germination times of 2-3 months. It can reproduce also through the plantules forming at the base or utilizing big branches with whole vegetative apex (not having dormant buds along the stem).

Cultivated since remote times in the Mascarenhas and in Madagascar due to its numerous employments, it has then spread in the African countries facing this island and from the beginning of the ‘800 has been introduced in various tropical and subtropical regions thank to its ornamental characteristics.

Can be tried its cultivation in the mildest temperate-warm zones, where next to 0 °C  temperatures are exceptional events and of short duration.

Of great effect as isolated specimen, due to the dimensions that may reach in height and breadth is suitable for parks and large gardens, avoiding places of passage and of rest due to the presence of thorns.

It requires full sun, or slight shade, and perfectly draining soils, preferably sandy, even if poor, acidic as well as alkaline. Of particularly slow growth, it initially takes advantage from regular watering and fertilizations, well rooted specimens require little cares and can bear periods of dry. Young plants, in particular of the variety with red margins, ‘Red Edge’, are cultivated in container for the decoration of patios and of open spaces.

In Madagascar, Mauritius and Réunion the leaves and the aerial roots, even more resistant, cut in thin strips, are utilized for making ropes, nets, grain sacks, sugar and coffee, bags, hats, and other common use objects, and, with the advent of tourism, for artisan and artistic objects whose request is continuously expanding; the leaves are also employed as cover of rural dwellings. Due to the thick crown and the resistance to saltiness it is often utilized as wind-breaker along the coasts; in Réunion it has often the function of support in the vanilla plantations (Vanilla planifolia Jacks. ex Andrews, 1808). 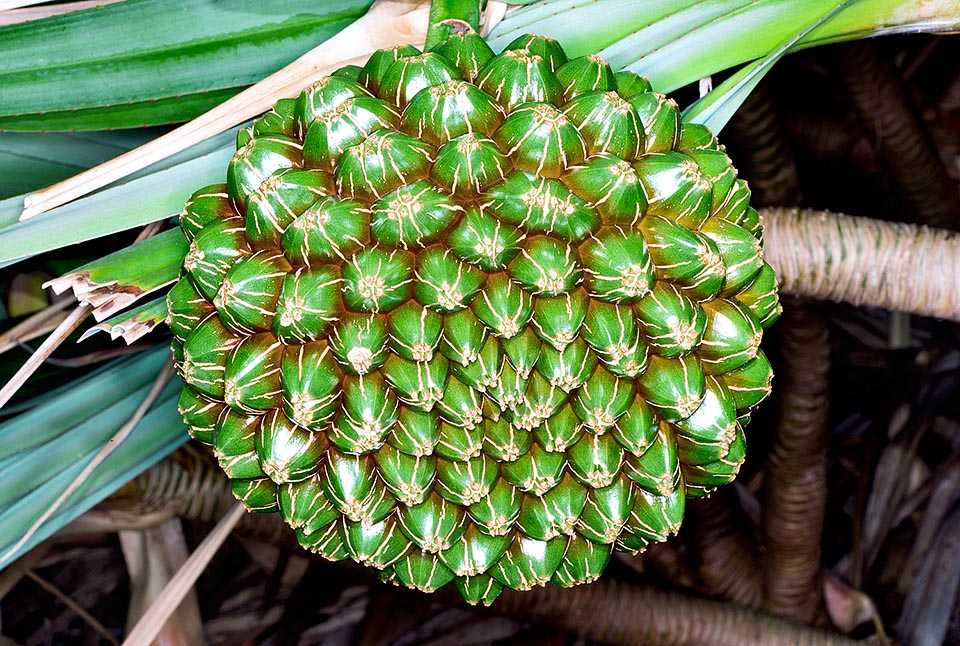 The fruit is a syncarp, that is, formed, like a pineapple, by concrescent and merged fruits. Globose, drooping, of 15-22 cm of diameter, is carried by a robust peduncle and has 100-200 drupes, angular due to mutual pressure, about 4 cm long, free in the upper half, initially green, then yellow when ripe, with a reddish band at the base. The vegetative apices are locally consumed as vegetable and though of poor value, the cooked fruits are edible, in nature source of food for small mammals © Giuseppe Mazza

The fruits, source of food for small mammals, are edible after cooking, but are not particularly palatable, and the vegetative apices are locally consumed as vegetable.