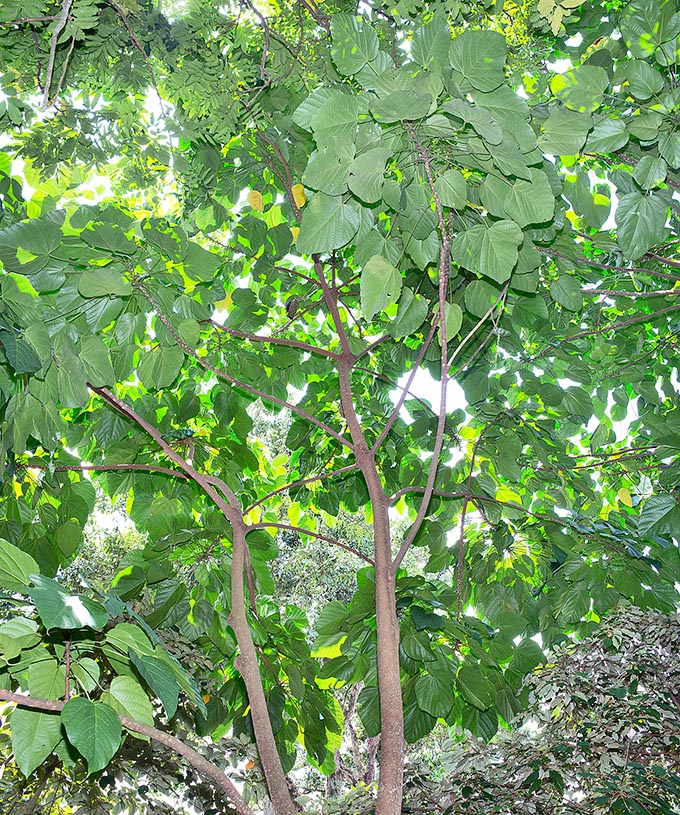 The species is native to Indonesia, Malaysia, Micronesia (Yap), Papua New Guinea, Philippines and Vanuatu where it grows in the rainforests and along the banks of the water streams, from the sea level, close to the mangroves, up to about 1000 m of altitude.

The name of the genus comes from one of the local names, “pangi”, used in Malaysia; the specific name is the Latin adjective “edulis, e” = edible, with reference to the seeds.

The Pangium edule Reinw. (1828) is an up to about 40 m tall tree, in the oldest specimens in the wild, with trunk, up to 1 m of diameter, with grey brown bark, slightly fissured longitudinally, and dense pyramidal crown. The leaves, on a 15 cm long petiole, are spirally arranged, cordate-ovate or subrounded with pointed apex and entire margin, 15-40 cm long and 10-25 cm broad, of glossy intense green colour. The species is polygamous-dioecious, with male and female inflorescences on different individuals, but with male inflorescences that may have one or two hermaphroditic flowers. The male flowers are united in axillar racemes with calyx formed by 2-3 concave sepals, coriaceous and covered by a reddish down, corolla with 5-7 oblong-ovate petals, about 2 cm long, of greenish colour, and 20-25 stamina. Female flowers, on 7-8 cm long peduncle, usually solitary, axillar, almost equal to the male ones, but with sterile stamina. The fruits are indehiscent ovoid to pyriform capsules, 15-28 cm long, covered by a thick brown down containing several almost ovoid seeds, about 5 cm long and of 2,5 cm of diameter, covered by a fleshy white cream aril, highly poisonous.

It reproduces by seed, previously kept in lukewarm water for one day, in draining organic loam maintained humid at the temperature of 26-28 °C, with germination times of 20-40 days and first fructification starting from the tenth year of age.

Species cultivable exclusively in the tropical and subtropical regions with high annual rainfall, requires full sun, but during the initial phases of growth when an excessive insolation is possible, and draining soils, slightly acidic to neutral, maintained almost constantly humid. Elsewhere it can be cultivated in capacious containers, to be sheltered in particularly luminous greenhouses or winter gardens, with lowest winter temperatures not under the 16 °C and high ambiental humidity.

All parts of the plant are very poisonous, in particular the seeds, due to the high presence of a cyanogenetic glycoside (gynocardin). Despite this, and the long process to which must be submitted in order to be safely consumed, its seeds have always had a great rôle in the alimentation of the local populations, and are still now an important ingredient of some typical dishes, for such reason the species has been often cultivated close to the villages. The treatment for eliminating the toxic substance foresees the removal of the membrane surrounding the seed and reapeated washing and cookings; one of the most used consists in the repeated washing in running water, long boiling, fermentation for 40 days in a pit full of ash and covered by earth and banana leaves and subsequent other cooking, an inadequate preparation may be fatal. Due to their antiseptic properties the leaves and the crushed seeds are still utilized by some isolated populations for preserving meat and fish; seeds and bark are locally employed for stunning the fishes and catching them easily. The oil gotten from the seeds, utilized in the past for cooking and for illumination, has finally promising characteristics as biofuel.