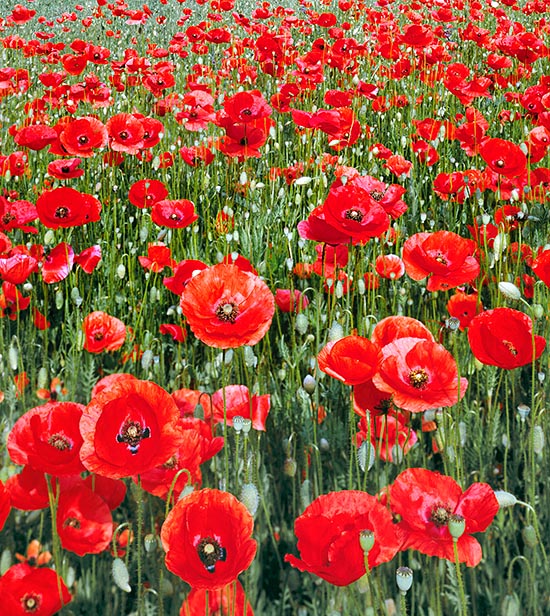 The genus Papaver includes about 125 species of perennial or annual herbaceous plants (16 present in the European countries); the centre of origin of the poppies infesting the crops in Europe and in the Mediterranean basin is included between Iran and Pamir (zone of origin of the cultivated wheats) and most likely the poppies have been introduced with the seed of these cereals (archaeophyte species) and linked with them. The red poppy or corn rose is spread in Europe, Asia and northern Africa.

The name of the genus should come from the Latin “papa” = pap (of the young children), because in the old times they put the petals, the juice or the seeds in the food for favouring the sleep of the babies. It can be also linked to “pap” = to bloom, the same which originates “papula” = vesicle.

The name of the species after some authors should come from the Greek “rojàas” (wild poppy) and such epithet should, in turn, be originated by róia, = pomegranate, due to the red colour of the petals; after others it is related to the Greek rheo, to slide off, and therefore from the Latin rhein, to fall, due to the caducity of the petals which do not resist more than one day once the flower has bloomed.

The red poppy or corn rose (Papaver rhoeas L. 1753) is an annual, laticiferous grass, which, if crumpled, emits a not too pleasant smell, 20-60 (less than 80) cm tall, with thin, cylindrical, bristly stem, simple or ramified, erect or ascending, for long time without leaves under the flower; tapering and whitish root. The basal leaves are very variable, with morbid hairs, sericious, oblong-lanceolate and mostly 1-2 irregularly pinnatipartite or almost pinnatisect, the cauline ones are alternated, sessile with great terminal segment acute to obtuse.

The flowers when in bloom are folded downwards, (the flowering is concentrated in the period April-June, but with later shoots up to November) solitary, odourless, with two bristly, ephemeral sepals. The corolla has 4 very big petals (diameter of the flowers 5-8 cm) of scarlet-red or minium-red (quite rarely violaceous or white), often with black spot at the base, in correspondence with numerous black-bluish stamina. 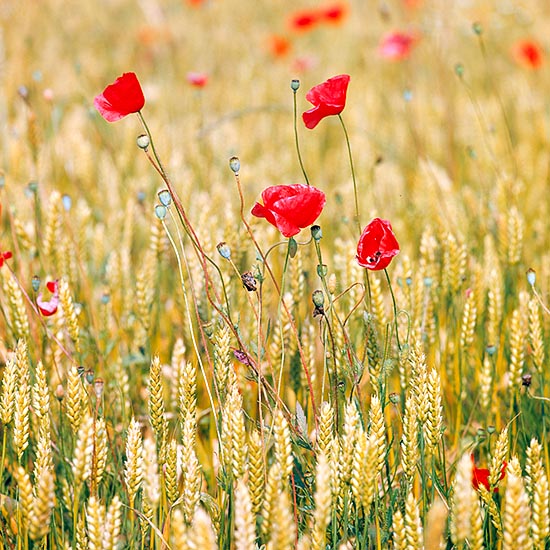 The fruit is a subglobose capsule, oval or oval-oblong glabrous, glabrous, surmounted by a flat stigma with 4-12 radial lobes, containing many very small (0,6-1 mm) reniform, finely reticulated, reddish-brown to greyish-brown, which when ripe get out from the openings placed under the stigma. Each plant produced, as an average, 10.000 to 20.000 seeds which remain vital in the soil up to 40 years and germinating in surface, usually during the autumn after having received a luminous stimulus.

Its subspecies strigosum (Boenn.) distinguishes for the absence of black spot at the base of the petals, high part of the stem and floral peduncles with appressed and not patent hairs like in the nominal subspecies and, usually, more slender plant contained in the development. There are several other species having similar look and habitat: Papaver hybridum, Papaver apulum, Papaver argemone, Papaver dubium, etc.

The red poppy or corn rose lives in the fields of cereals, the meadows, and the abandoned soils, particularly the clayey and calcareous ones, the uncultivated areas, the margins of the roads, the mounds of soil and stirred soils, ruins and rubbles, from the plain up to about 1800-1900 m.

Before the generalized employment of the herbicides in our cultivations of wheat, barley, rye and oats the red poppy did form, often mixed with the cornflowers or the chamomile enchanting landscapes, immortalized especially by the impressionistic painters. The children of yore, industrious having no toys, did use the capsules of the corn roses as a sort of stamps for the front or for the hands whilst the little girls made pretty little dolls taking the swollen buds, leaving a short part of peduncle which they placed on the bottom of the capsule, just cut with the nails at the base, for getting a sort of small head. At this point, they spread apart the two sepals, which serve as cloak, for getting the red “skirt” formed by the petals. 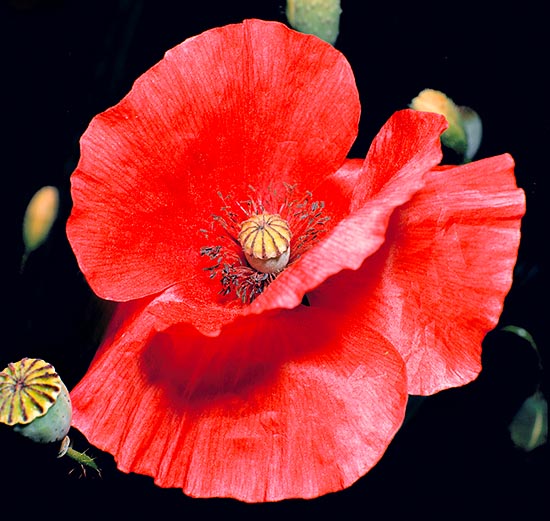 It is traditional in the Anglo-Saxon countries to dedicate the poppy to the memory of the first and second world wars. In England, on the Armistice Day, they wear a red poppy on the buttonhole.

The petals, dried in the shade in dry and aerated locations, have slight narcotic properties, exploited in the popular medicine for decoctions with sedative action, as well as against cough, diaphoretic and broncho-sedative. They contain, besides the readine, also reagenine, rearubine, isoreadine, protopine, mucilages, anthocyanins, resins, traces of meconic acid, potassium salts and starch. From the petals, rich in anthocyanins, they get also a red dye used in the past by the women as makeup for lips and cheeks.

In the domestic economy of our countryside the basal leaves of the corn rose occupy a prominent position because they furnish, at the end of the winter, a very good and easy to find cooked vegetable. The dried seeds, as well as those, more known, of the Papaver somniferum, can be utilized for preparing some types of bread and cakes and they get from them oil with excellent dietetic qualities, besides being a good lenitive and emollient for external use.

Infusion for favouring the sleep

Leave in infusion for ten minutes in a teacup of just boiled water 2,5-3 grams of dried petals of poppy, drain squeezing the residue, sweeten and add a spoon of whiskey. Drink before going to bed. Alternate with infusions of other calming plants (valerian, chamomile, lemon balm, linden, etc.). 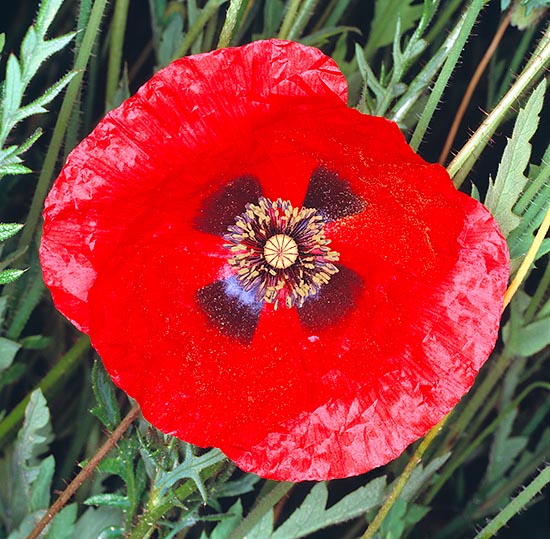 Bring to a boil about 200 cl of water, pour them in a cup, add 10 fresh capitula of chamomile, 10 petals of poppy, the flowers (the light blue ones) of five capitula of cornflower and allow to cool. To do wraps with a cotton swab foe about twenty minutes on the parts to be treated.

Papaver rhoeas was last modified: May 28th, 2020 by Giuseppe Mazza