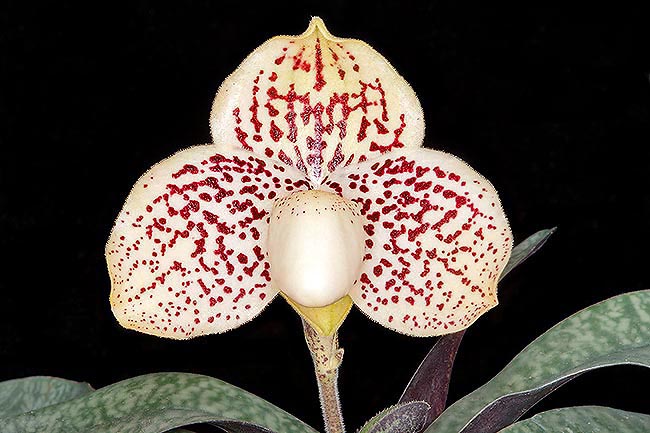 The Paphiopedilum godefroyae has 5-10 cm flowers, quite big, and is easy to cultivate © Giuseppe Mazza

The species is native to Thailand where it grows along the coasts close to the sea in cavities of calcareous rocks full of decaying leaves up to about 30 m of altitude; the climate is monsoonal, warm and rainy from June to October, dry and somewhat cooler from November to May.

The name of the genus is the combination of the Greek terms “paphia”, Aphrodite’s attribute, and “pédilon” = sandal, with reference to the shape of the labellum.

The species was honoured to the wife of the French botanist and horticulturist Alexandre Godefroy-Lebeuf (1852-1903), in whose glasshouse it did flower for the first time in Europe and who described it, under the name of Cypripedium godefroyae, in his review, “L’Orchidophile”, in 1883.

The Paphiopedilum godefroyae (God.-Leb.) Stein (1892) is a rather variable, cespitous, terrestrial or lithophytic species, with 4-6 persistent leaves, alternate, distichous, coriaceous, linear oblong, up to about 14 cm long and 3 cm broad, of dark green colour with pale green spots on the upper page, speckled with purple below.

Erect terminal inflorescence, up to about 10 cm long, slightly pubescent, carrying 1-2 waxy, roundish, flowers of 5-10 cm of diameter, of colour varying from the pale green to the cream white dotted of brown purple; the flowers are long-lasting, 4-6 weeks. It reproduces by seed, in vitro, and by division, at the vegetative restart, with each section provided with at least 3-4 tufts.

It is a much ornamental species due to the large flowers, in comparison to the size of the plant, as well as due to its foliage, of relatively easy cultivation, provided that its seasonal rhythms are respected.

In summer, during its growth period, it requires a slight shade, even if with some hours of direct sunlight, medium-high temperatures, regular waterings and high atmospheric humidity, 60-80%; when the growth is ended, in winter, the waterings are to be spaced in way to allow a slight resting dry period in order to stimulate the flowering with cooler temperatures; a good and constant ventilation is fundamental.

For the waterings and nebulisations, rain water is to be utilized, or water obtained by reverse osmosis, or demineralised; the fertilizations, duly distributed and alternated, in way to avoid salts accumulation at the roots, to which the species is quite sensitive, are to be done during the vegetative period preferably with hydrosoluble balanced products, with microelements, at ¼ of the dosage, or less, than what suggested on the package. Preferably are to be used small pots with many holes in order to facilitate the ventilation and much aerated compost, being sensitive to the water stagnations, cause of lethal rottenness, which may be formed by medium-sliced bark fragments with addition of perlite, moss and crushed limestone; the repottings are to be done by the completion of the flowering.
The species is reported into the appendix I of CITES (endangered species whose trade is allowed only on special circumstances).