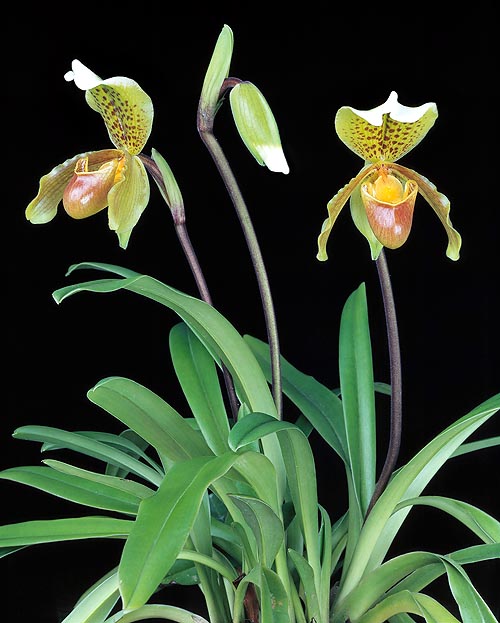 The species is native to China (Yunnan), India (Meghalaya) and Nepal, where it grows on grassy or shrubby calcareous rocky slopes, on layers of decomposing vegetation, between 1000 and 1800 m of altitude, in zones characterized by monsoonal climate, with warm and humid summers and cool and dry winters.

The name of the genus is the combination of the Greek terms “paphia”, attribute of Aphrodite, and “pédilon” = sandal, with reference to the shape of the labellum; the name of the species is the Latin term “insignis,e” = outstanding, extraordinary.

Solitary terminal flower (rarely paired) on an erect floral scape, 20-25 cm long, greenish brown, covered by a short reddish hair, floral bract long about 5 cm spotted of purple, ovary long 4-6 cm covered by a thick and short purple down. Waxy flowers of 8-10 cm of diameter with greenish yellow dorsal sepal with purple brown spots and white edges, joint together lateral sepals (synsepalous), greenish yellow with purple brown spots at the base, brownish yellow petals with darker venations and brownish yellow labellum with brown venations. The dorsal sepal is ovate, 5-6 cm long and 3-4 cm broad, with curved upper margin, the synsepalous, ovate-elliptic, is 4-5,5 cm long and 2-3,5 cm broad, the petals are oblong-spatulate, 5-6 cm long and 1-2 cm broad, with wavy margins, finally, the labellum, saccate, is 4-5 cm long. It reproduces by seed, in vitro, and by division with each section provided with at least 3-4 tufts.

Species appreciated and cultivated since long time, together with its quite numerous hybrids, also as cut flower, due to the beauty of its long lasting flowers, which appear between November and January, and the facility of cultivation.

In the zones where the temperatures close to 0 °C are a short lasting exception, it may be cultivated in open air, in a shady and aerated zone, on much draining soil, possibly with addition of coarse sand, for improving its drainage, and crushed limestone.

When in greenhouse or in apartment, it requires a semi-shaded position, aerated, humidity 50-80%, winter night lowest temperatures between 8 and 12 °C and highest temperatures in summer preferably not exceeding the 28 °C; a decrease of temperature by early autumn stimulates its flowering.

In summer, the waterings are to be regular and abundant, preferably during the first hours of the day; in way to allow the water to dry up, for avoiding stagnations at the axil of the leaves which may cause rottenness, in winter they are to be reduced, but without having ever the substratum completely dried up. The waterings and nebulisations are to be done with rain water, or water obtained by reverse osmosis or demineralised, and the fertilizations, during the vegetative period, with hydro-soluble balanced products, with microelements, at ¼ of the dosage suggested on the packages, distributed and alternated in way to avoid salts accumulations at the roots, to which the species is particularly sensitive. For the cultivation in container, rather low pots are to be chosen and with many holes of drainage and much draining and aerated compost, but capable to keep the humidity, which may be formed by finely sliced bark fragments, coarse sand or agri-perlite and charcoal, with addition of calcareous crushed stones; repottings and divisions are to be done by the end of the flowering.

The species is inscribed into the appendix I of the CITES (endangered species whose trade is allowed only under exceptional circumstances).