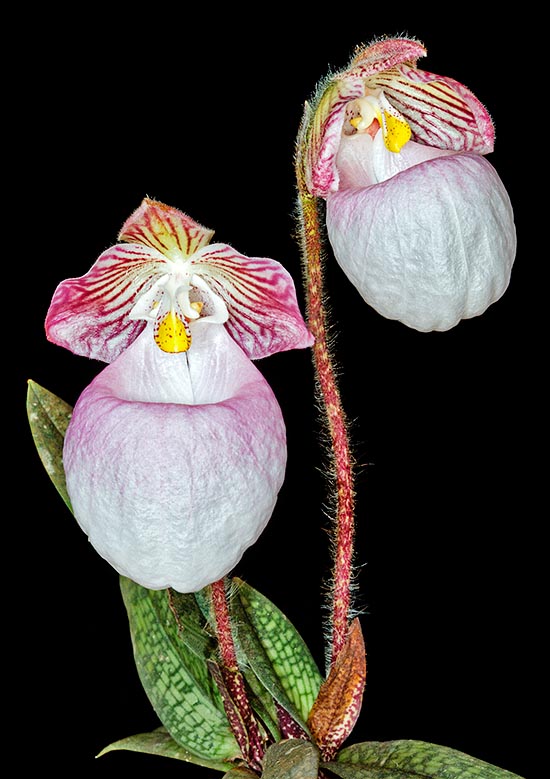 The species is native to China (Guangxi, Guizhou and Yunnan) and northern Vietnam where it grows in the forests on calcareous rocky soils or in the crevices exposed north, between 1000 and 1700 m of altitude.

The Paphiopedilum micranthum Tang & F.T.Wang (1951) is a terrestrial or lithophytic species with creeping rhizomes, of 1,5-2,5 mm of diameter, and spaced, up to more than 10 cm, tufts, formed by 3-5 oblong to elliptic distichous leaves, 5-16 cm long and 1,5-3 cm broad, with pale green and dark green squares on the upper page, thickly purple dotted below. Erect inflorescence bearing one single flower, rarely two, 4-7 cm broad, on a 6-25 cm long villous peduncle, of green colour with purple or reddish brown spots; the flowers are long-lasting, 2-3 weeks. Ovate, 1,5-2,5 cm long and 1,2-2,5 cm broad dorsal sepal, of pale yellow colour with purple hues, lateral sepals fused to form a unique sepal (synsepal) behind the labellum, of shape and size similar to the dorsal, ovate sub-orbicular petals with rounded apex, 2-3,2 cm long and 2,5-3,5 cm broad, of the same colour as the dorsal sepal, saccate labellum, 5-6,5 cm long and 3,5-4,5 cm broad, with upper margin curved inwards, white, pale pink or pink, and circular to elliptic staminode, 1-1,2 cm long and 0,8-1 cm broad, white at the base and yellow at the apex dotted of red.

It reproduces by seed, in vitro, and by division, at the vegetative restart, with each section provided of at least 3-4 tufts.

Particularly ornamental species for the flowers as well as for the foliage, requires high diffused luminosity, medium-high temperatures in summer, 20-30 °C, fresh in winter, with night temperatures of 8-10 °C to stimulate the blooming, high humidity, 60-80%, and a constant ventilation. It is usually cultivated in wide and low pots or in baskets in order to allow the rhizomes to freely elongate, using a draining and aerated substratum which can be formed by medium sized bark, crushed stones and agri perlite, with possible addition of sphagnum, to maintain a greater humidity, if the location is rather dry. Regular and abundant watering in summer, preferably in the first hours of the day avoiding stagnations at the axil of the leaves which may cause rottenness, reduced in winter, but without ever allowing the substratum to dry up completely. The watering and the nebulisations are to be done with rainwater, from reverse osmosis or demineralised, and the fertilizations, during the vegetative period, with hydrosoluble balanced products, with microelements, at ¼, or less, of the dosage suggested on the package. The repottings are to be done in spring by the end of the blooming.
The species is reported in the appendix I of the CTES (endangered species for which the trade is allowed only in exceptional circumstances).