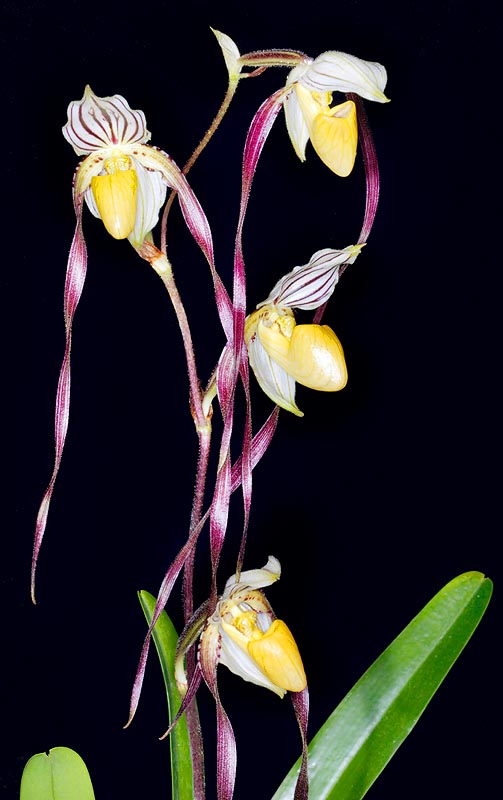 The species is native to Borneo and the Philippines, where it grows on calcareous rocks covered by moss or decaying vegetal residuals, less frequently on the trees, along the coasts and up to about 500 m of altitude.

The name of the genus is the combination of the Greek terms “paphia”, attribute of Aphrodite, and “pédilon” = sandal, with reference to the shape of the labellum; the Latin name of the species, “philippinense” = of the Philippines, refers to one of its places of origin.

Terminal floral scape on 2-3 years old tufts, 35-60 cm long, of purple colour, pubescent, carrying 4-6 flowers with cordate sepals (the two lateral ones are united forming one only sepal, called “synsepalous”, behind the labellum), about 5 cm long, of white colour with brownish purple longitudinal stripes, spirally twisted petals of brownish purple colour, long up to about 18 cm and 0,6 cm broad, and saccate yellow labellum, long up to about 4 cm.

It reproduces by seed, in vitro, and by division with each section provided with at least 3-4 tufts.

It is one of the most cultivated and most appreciated species of the genus, not only for the showy flowering, but also for the quite easy cultivation; it requires medium-high temperatures with winter night lowest ones not less than 15 °C, high humidity, 60-80%, and luminosity, excluding the direct sunlight, and constant movement of the air; it flowers between late spring and summer as it is a species flowering only if the photoperiod is long.

The waterings must regular and abundant, avoiding stagnations at the axil of the leaves as they might cause rottenness, slightly reduced in winter, but without ever leaving the substratum to dry up completely. The waterings and the nebulisations are to be done with rain water, or water obtained by reverse osmosis or demineralised, and the fertilizations, during the vegetative period, with hydro-soluble balanced products, with microelements, at ¼ or less, of the dosage suggested on the package, distributed and alternated in order to avoid salts accumulation at the roots, to which the plant is quite sensitive.

The cultivation substratum may be formed by finely sliced bark fragments, charcoal and agriperlite with addition of crushed limestone; divisions and repottings are to be done by the end of the flowering, taking care to cause the least possible damage to the rooting apparatus.